Summer is just around the corner and that means a slew of summer blockbusters will be heading our way. Some of us may prefer a rom-com, others will line up for a laugh-out-loud comedy, and still others may delight in a gory horror flick. But we can all usually agree on one thing: car chases are pretty awesome.

We know they’re coming, so it’s not the surprise factor that makes us love car chases so much. Perhaps it’s the rush of imagining ourselves in that driver’s seat and putting the pedal to the metal that makes a chase scene so thrilling.

We thought it would be fun to compile a list of some of the all-time best movie chase scenes. This wasn’t an easy task as there are thousands of films with amazing car chases. But after hours of consideration and many giant mugs of coffee, we’ve done the impossible. Here are what we consider eight of the most famous car chase scenes from the silver screen.

If you’ve never seen this flick, it is well worth the 111 minutes. Now there was an original The Italian Job from 1969 that had a fantastic chase scene with mini cars. But you should definitely check out the 2003 remake with Mark Wahlberg, Charlize Theron, and Jason Statham.

At one point their characters race through underground Los Angeles in Mini Coopers. These cars were custom-made for the film and built with electric motors, as combustible engines aren’t allowed in the subway tunnels they shot in. And kudos to the actors because most of them did their own stunt driving!

Who can forget Mel Gibson’s performance in the iconic Mad Max. He was the no-nonsense hard man we all feel like being most days. In the beginning of the film, Mad Max was a calm cucumber as he chased down the crazed Nightrider and his girlfriend in a stolen car.

Two other cop cars tried to pursue, but they crashed in the process, barely avoiding mowing down innocent citizens. But Mad Max gets right on the bad guy’s tail, literally. Let’s just say the Nightrider and his girlfriend met a fiery end. And so begins the tragic tale of Max Rockatanksy’s disillusioned tale of revenge.

“There’s 106 miles to Chicago. We’ve got a full tank of gas, half a pack of cigarettes, it’s dark out, and we’re wearing sunglasses.”

That is the famous line that sends the Blues Brothers, played stupendously by Dan Aykroyd and the late John Belushi, on one of the best car chases ever on the silver screen. On a mission to save the Catholic orphanage they grew up in, the two brothers lead an insane car chase that includes police, a rival band, and the Illinois Nazis to downtown Chicago.

Fun fact: Director John Landis ended up going through 60 police cars and 40 stunt drivers in this film. I wouldn’t want to have to pay that bill!

The only thing better than Sean Connery trying to get away in a regular car, is Sean Connery playing an ultra-dangerous super spy trying to make a run for it through the middle of San Francisco in a massive Hummer. If you haven’t seen the Michael Bay directed film, you can imagine the kind of destruction that would occur if someone in a Hummer decided NOT to follow traffic laws.

Also tearing up the streets in pursuit of Connery is Nicolas Cage in a Ferrari. It’s an incredible piece of action filmmaking, and helped Bay earn himself the reputation of a premier action movie director. Plus it has that charming Sean Connery accent and the over-the-top acting of Cage — a perfect combination.

We can’t possibly create a list of best movie car chases and NOT include a James Bond flick. In 1974’s The Man with the Golden Gun, Roger Moore ends up doing a corkscrew jump in an AMC Hornet X. Not only is it really impressive to look at, but it’s even more impressive to learn that the stunt, which was shot with eight cameras, was pulled off in the very first take.

Almost every Bond flick has a car chase scene worthy of this list, so it was definitely hard to pick just one. The more recent Daniel Craig as 007 flicks certainly don’t disappoint when it comes to intense road scenes either, even when Bond trades in his classic Aston Martin for an Audi or BMW.

We also cannot leave this film off of the list. Now, if you are a fan of the Fast & Furious franchise and have seen all of the many sequels, you’ll know that the car chases have gotten a bit ridiculous over the years — some of them include submarines now. In fact, when you look back on the original 2001 film, the car chase scenes seem pretty tame in comparison.

Except for that last one where Paul Walker’s character Brian races Vin Diesel’s character Dominic, riding in his father’s fabled 1970 Dodge Charger. The scene culminates in both cars jumping a train track in the nick of time, but Vin’s character’s car ends up hitting a truck.  His car flips up over Paul’s car in epic slow motion. That moment still holds up after all of these years.

There are a plethora of reasons why movie characters need to track someone down in a film. Most of the time it is due to a personal vendetta. In John Wick, Keanu Reeves plays a retired assassin who tracks down the entirety of a Russian crime syndicate because one of them unknowingly killed his dog, a gift from his late wife.

That’s as good as any reason we can think of to drive like a maniac, which Keanu does, demolishing a number of other cars while behind the wheel of his 2011 Dodge Charger LD (not to be confused with his beloved 1969 Ford Mustang 429). The car ends up riddled with bullet holes and totaled, but Wick eventually gets his revenge.

Let’s end the list by taking a look at the film that helped popularize the cinematic car chase scene. In Bullitt, Steve McQueen played a San Francisco cop in pursuit of an underworld kingpin behind the wheel of his beloved 1968 Ford Mustang GT. The highlight of the film is definitely the 10-minute chase scene that revolutionized how car chases would be seen in films.

There you have them. 8 of the most famous movie chase scenes. Did we leave your favorite car chase off the list? Tell us what it is in the comments below! 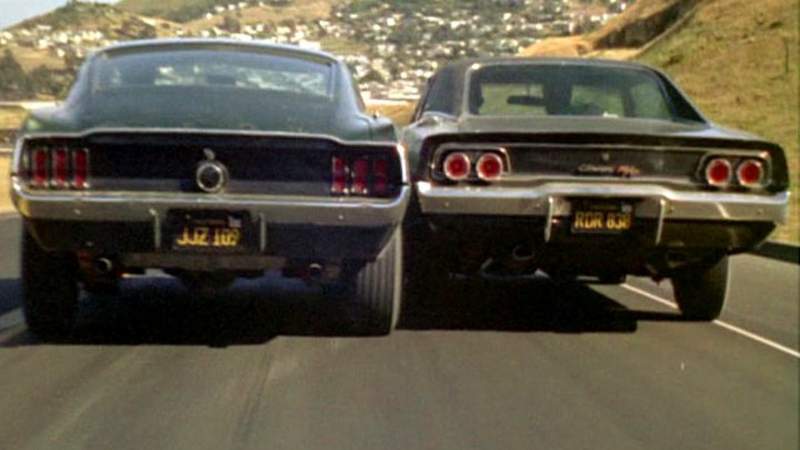