The 10 Greatest Motorcycles Of All-Time

Motorcycles deserve a place in the pantheon of classic vehicles. After all, they have been around as long as cars. There are many classic bikes that are beloved by automotive collectors throughout the world. These include legendary models produced by leading manufacturers such as Harley Davidson, BMW, and Triumph. Many of the motorcycles on this list can be found in museums around the world. Or in the private collections of movie stars, business tycoons, and professional athletes. Here are 10 of the greatest motorcycles of all time…

Revised in 2013 to enhance its long-distance capabilities, the Multistrada is basically four motorcycles in one. Semi-active suspension, self-adjusting windshield, standard traction control, and ABS give this motorcycle the high-tech gadgetry motorcycle lovers want in a touring bike. It is one of the more affordable bikes on this list, with a starting price of around $20,000. Used models sell for as little as $10,000.

However, the version that most collectors want to get their hands on is the very first Bullet that was made in 1931. This original model features a 350 cc four stroke engine, as well as a cool chrome finish. The Royal Enfield Bullet’s popularity has been helped by the fact that the motorcycle has been featured in dozens of movies, notably Harry Potter and the Deathly Hollows and Big Fish.

The distinguished, British-manufactured Norton Commando was prominently named “Machine of the Year” for five consecutive years from 1968 to 1972 by Motor Cycle News. The bike is known for having an innovative framework called the “Isolastic System.”  It helped solve the long existing problem of engine vibration and revolutionized motorcycles in the process.

Designed by a group of engineers who left Mercedes-Benz, the Norton Commando was produced for ten years until 1977 when production stopped. However, several police forces around the world took an interest in the Norton Commando. The bike had an enviable life as the motorcycle of choice for many law enforcement agencies, notably Interpol in Europe. With an 850 cc engine, the Commando has also proven to be a popular racing motorcycle.

First built in 1948, the Vincent Black Shadow was an innovative motorcycle for its time. It had several unique features that included a stressed engine and extensive use of aluminum. The Black Shadow was also incredibly fast. It held the record for fastest production bike ever made for nearly 20 years. Every one of the motorcycles was hand built, making them even more unique.

A popular racing machine in its day, the Black Shadow had a huge 998 cc engine that made it difficult for riders to control. One ardent fan of the bike was novelist and counterculture figure Hunter S. Thompson, who featured the motorcycle in his classic book Fear and Loathing in Las Vegas. Thompson stated that, “if you rode the Black Shadow at top speed for any length of time, you would almost certainly die.”

The Velocette Viper is a classic motorcycle from the 1950s and 60s. Many collectors prize this bike and claim it can stand next to any other legendary motorcycle. The Viper features glass fiber enclosed panels that were revolutionary in the 1950s, as well as a 349 cc engine that had a bi-metal cylinder with high compression pistons.

Some special model Vipers also had extra-large three gallon gas tanks. This enabled the Viper to drive at extremely high speeds for long periods. In fact, this bike holds an unbeaten record of cruising for 24 hours straight at 100 miles per hour. The Viper was only produced from 1955 until 1968. It is now considered a collector’s item.

For some gearheads, the British company Triumph is the first and last name in motorcycles. And the very best motorcycle ever built is the Triumph Bonneville. First appearing in 1959, the Bonneville is named after the Bonneville Salt Flats in Utah, where the bike competed to break numerous land speed records.

The motorcycle easily reached speeds of up to 115 miles per hour, which was unheard of in the late 1950s and early 1960s. Nicknamed the “Bonnie,” the motorcycle’s cool design and low slung seat made it popular among celebrities of the day, as well as professional racers. This is a classic bike in every sense of the word.

It may look a little odd, but the Moto Guzzi was a leading racing bike back in the 1950s. Armed with a V8 engine, the Moto Guzzi is now considered a masterpiece of automotive engineering. Using a water cooled screamer allowed the bike to displace only 500 cc. It also has four camshafts and eight baby carburetors.

This enabled the Moto Guzzi to reach earth shattering speeds of 175 miles per hour, which was mind blowing at the time. Owing to high production costs, the Moto Guzzi was only produced between 1955 and 1957. However, the bike continued to make a name for itself on racetracks around the world for years afterwards. Today it is a much-desired motorcycle among discerning collectors.

Known as the “Slash 5” series of motorcycles, the BMW R50/5, R60/5 and R75/5 are considered by many experts to be the most reliable bikes ever built. Made for only three years between 1970 and 1973, the Slash 5s were eventually replaced by the 6 series. However, the Slash 5s were extremely advanced for their time with electric starters and telescopic forks.

The R75/5 is considered the very best of the Slash 5s, as well as the fastest of the series as it could hit a top speed of 110 mph. The Slash 5s also have a cool look and have proven themselves to be an ideal street bike. Today they are a popular vintage motorcycle from the 1970s.

For motorcycle aficionados and WW II history buffs, bikes don’t come any better than the Harley Davidson WLA. This motorcycle was built for the U.S. Army during the Second World War and is slightly different from the civilian WL model. The fenders, for example, were modified so that the bike could withstand the muddy battlefields in Europe. Many WLA bikes also came equipped with leg guards and windshields to cut down on the spray from puddles and mud. The WLA also came with one-of-a-kind blackout lights that were used when traveling with a military convoy at night.

Production of the WLA motorcycle spanned the war years 1940 to 1945. A total of 90,000 WLA motorcycles were manufactured by Harley. Today, the Army green colored WLA is considered one of the coolest motorcycles ever built by Harley Davidson, and a bike that every collector wants to get their hands on.

First built in 1947, the Indian Chief is one of the coolest looking motorcycles ever made. Built around a 1,200 cc engine, the Indian Chief could hit 85 mph in just third gear. Outfitted with a left foot clutch and hand operated shifter near the gas tank, the Indian Chief broke all the rules and looked good doing it.

Unlike the classic Harley models that it competed against, the Indian Chief had rear suspension that made the ride extra smooth. Although not for everyone, the Indian Chief is the motorcycle of choice among bike purists. The 1950 Indian Chief Black Hawk is particularly prized among collectors. Despite the manufacturer’s up-and-down production history, the Indian Chief persists to this day. The 2019 Indian Chief Dark Horse model has received rave reviews from critics. 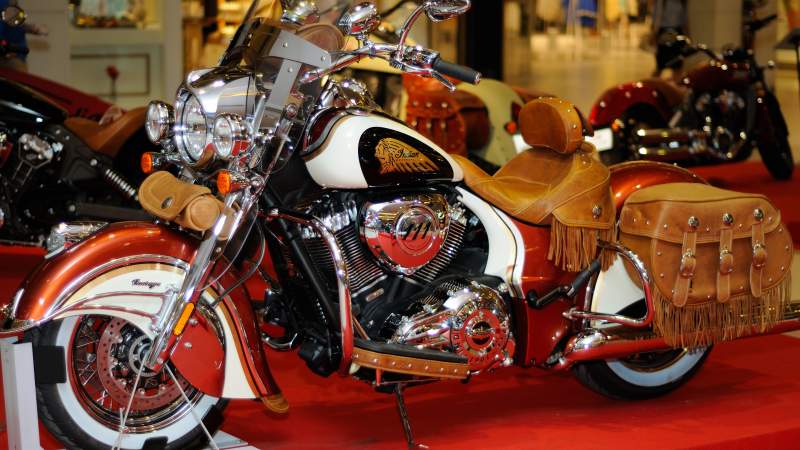