The 10 Greatest Bugatti Models Of All-Time

Since the company’s inception in France in 1909, Bugatti vehicles have been known as stylish high-performance automobiles that pack a punch. Over the last century, Bugatti’s reputation for design beauty and racing prowess has only grown. There have been many famous Bugattis built, including the Type 35 Grand Prix cars and Type 55 sports cars.

Now owned by the Volkswagen Group, Bugatti still continues its rich heritage of producing limited edition, extremely exclusive sports cars. Some of the world’s top car collectors only buy Bugatti models. Here is a list of the 10 greatest Bugatti cars of all time. Eat your hearts out!

We begin this list with the first Bugatti road car, known as the “Type 13.” Many people consider the Type 13 to be the first true Bugatti car. Built between 1910 and 1920, the Type 13 featured an eight-valve engine that contained 16-valve heads. Engineers at the company nicknamed the car “thoroughbred.”

The Type 13 was the first mass assembled car that brought money into the Bugatti company. Although it was discontinued in 1920, the Type 13 was again resurrected between the First and Second World Wars when Bugatti went through a down period of financial hardship. For many Bugatti fans, this is the car that started it all and set the tone for all the high-performance vehicles that came after it.

The Type 35 won more than 2,000 international races while in competition. It won the “Grand Prix World Championship” in 1926 after winning 351 races and setting 47 world records in the previous two years. At its height, Type 35s averaged 14 race wins per week. Bugatti won the Targa Florio for five consecutive years between 1925 and 1929. Now that’s impressive. Not surprising that the Type 35 now fetches top dollar at auctions.

Looking at the Bugatti Royale, you can be forgiven for mistaking it to be a Rolls Royce. This is a car meant to be used by royalty, politicians, and movie stars around the world. Bugatti had planned to build hundreds (if not thousands) of the Royale. However, the car had the misfortune to go into production in the 1930s just as the Great Depression hit hardest.

In the end, Bugatti only made six of them and only sold three. Despite the cars stylish exterior and luxurious interior, the company just couldn’t sell them during the Depression. Nevertheless, the Royale endures as a classic and unique Bugatti that today adds to the company’s infamous reputation and history. Its design elegance is unquestioned.

The Bugatti EB110 SS is credited with reviving the company in the 1990s after the company was forced into hiatus for 35 years due to financial hardship it encountered in the 1960s. Produced from 1991 to 1995, the mid-engine Bugatti EB110 SS was a roaring return to form for Bugatti. It put the company back on the map in terms of production of super sport cars.

The credit for this car, and Bugatti’s revival, goes to Italian businessman and entrepreneur Romano Artioli. He infused the EB110 SS with sleek Italian design while remaining true to the nameplate’s French history. Without this car and the vision of Artioli, the Bugatti brand may never have returned to prominence. The EB110 SS definitely brought Bugatti back to life.

What is the most expensive Bugatti ever produced, you ask? The answer is the Bugatti La Voiture Noire, a limited-edition production car that was special order only. It sold to an extremely wealthy clientele for €16.7 million, or roughly US$20 million. Obviously, this Bugatti only appeals to buyers with the deepest pockets – think Middle Eastern royalty and business tycoons.

For a modern track star, look no further than the Bugatti Divo, one of the company’s very best race cars. What distinguishes the Divo from other Bugatti racers is its light weight, amazing power output, and advanced technology. As a result, the Divo outperforms both the Chiron and Veyron on the racetrack despite not having the top speed among Bugatti race cars.

Sold with the tagline “Built for corners,” the Divo is named after French racing driver Albert Divo, who raced for Bugatti in the 1920s and won the Targa Florio race twice. Only 40 Bugatti Divos were built, and they were all presold before the model even went into production. While difficult to get hold of, the Divo is nevertheless a modern Bugatti classic worthy of a place on this list.

The Bugatti Veyron 16.4 is a modern legend and one of the very best cars ever produced by the French automotive manufacturer. In fact, the Bugatti Veyron 16.4 was named “Car of the Decade” by the BBC television show Top Gear. The Veyron 16.4 also won Top Gear‘s “Best Car Driven All Year” award in 2005. Additionally, the Super Sport version of the Veyron 16.4 is recognized by the Guinness World Records as being the fastest street-legal production car in the world, with a top speed of 267.86 miles per hour. Impressive!

The Veyron Grand Sport Vitesse model is the fastest roadster in the world, reaching an averaged top speed of 254.04 miles per hour. With so many accolades thrown at it, one can easily see why the Bugatti Veyron 16.4 is ranked so highly on this list. The engineering of this car has been called “groundbreaking” and “revolutionary” by some automotive critics.

If there’s one car that can possibly top the Bugatti Veyron 16.4, it would be its successor. The Bugatti Chiron, which went into production in 2016, edges out the competition. To top the Veyron 16.4, the engineers at Bugatti outfitted the Chiron with 1,500 horsepower luxury hyper car engine that can hit a top speed of over 260 mph and reach 60 from a standing start in just 2.3 seconds.

Additionally, the Chiron is a masterpiece of design. It maintains a similar shape and structure as the infamous Veyron 16.4, but with some critical changes that include L.E.D. headlights, sharp lines, a revamped interior, and a more aggressive looking grille. In all, the Chiron combines the best of the Veyron 16.4 while improving on it in some critical areas. Few cars can match the Chiron’s combination of design and performance.

It is the first time that any car’s body and interior have been equipped with high-quality porcelain elements. But don’t let the design fool you. This Grand Sport is capable of pushing 240 mph and is a performance machine. It is also one of the most expensive cars ever sold, selling for an initial price off of US$2.5 million. That price though is considered a steal as the Grand Sport L’Or Blanc is quickly becoming a desired collector’s item. The asking price continues to push higher and higher. 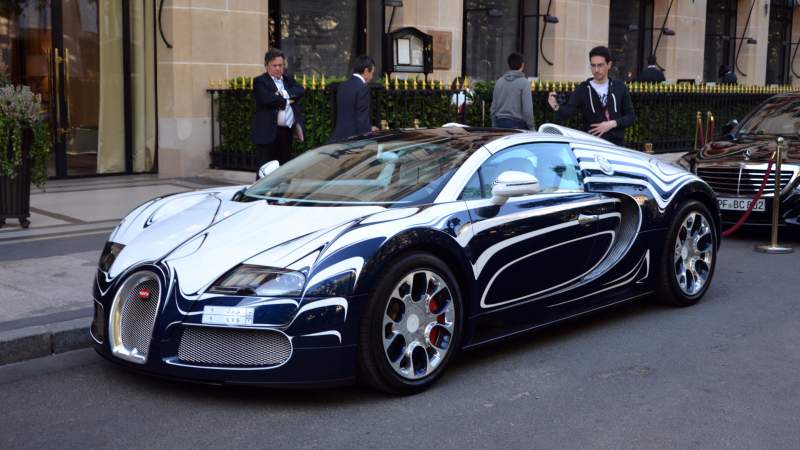