8 Car Companies You Didn’t Know Were Owned By Volkswagen

The German name “Volkswagen” literally translates to “people’s car” and for nearly 100 years the car company has retained its reputation for manufacturing affordable family vehicles. Actually started by Adolph Hitler in 1930 as a car company whose mandate was to make cheap cars that the common German worker could afford, Volkswagen has evolved over the years to become a multinational organization with operations around the world and multiple vehicle brands and nameplates.

In fact, you may be surprised by the number of car companies and automotive brands that are today owned by the Volkswagen Group, which is the larger parent company that all the brands fall under. While the company doesn’t publicize its ownership structure, the reality is that some of the best known and beloved car companies in the world are owned by Volkswagen. Along with making cars under the VW brand itself, the German auto giants also own the following brands.

We’re kicking things off with a brand that doesn’t even technically make cars, since Ducati exclusively makes motorcycles. Founded in 1926 in Italy, the company is now well-known for their high-performance, high-speed machines. While their models are also extremely popular with bike enthusiasts, the Ducati brand is also common place on the racing circuit. Multiple motorsports champions have ridden a Ducati on their way to the top of the podium.

Ducati was previously owned by private holding groups after the family sold it in 1950, until it was purchased by Lamborghini in 2012 — which you’ll soon learn is another iconic Italian auto brand owned by VW, if you keep reading.

The Czech Republic isn’t known as a hot bed of automotive manufacturing. It’s hardly the Detroit of Europe. Yet, Škoda Auto endures as the leading Czech automobile manufacturer and is a company that citizens of the Czech Republic are proud of. Founded back in 1895 as “Laurin & Klement,” the company was acquired by the industrial conglomerate Škoda Works in 1925 and it was a government owned operation until the collapse of the Soviet Union in 1991.

After being privatized, Škoda Auto became a wholly owned subsidiary of the Volkswagen Group in 2000. Today, Škoda Auto sells vehicles in over 100 countries. In 2017, the automaker generated an operating profit of €1.6 billion (Euros). As of 2017, Škoda’s profit margin is the second highest of all VW Group brands and it is now considered a jewel in the Volkswagen crown. Like Volkswagen, Škoda Auto specializes in selling family friendly sedans and compact cars. Despite its success, Škoda Auto retains its headquarters in Mladá Boleslav, Czech Republic.

Here’s a trivia question for you – what is the largest automotive manufacturer in Spain? If you guessed SEAT, you’d be correct. Headquartered in Martorell, Spain, SEAT was founded in 1950 and owned and operated by the Spanish government until 1986, when it was sold to Volkswagen. Today, SEAT remains a wholly owned subsidiary of VW.

Under the VW umbrella, SEAT has thrived. The company is the only major Spanish car manufacturer that develops its own cars in-house. Their production is now over 500,000 units a year and nearly 20 million cars have been sold by the company to date. Three-quarters of SEAT’s annual production is shipped to 70 countries worldwide, making it a truly international player in the automotive industry. Popular nameplates include the SEAT Arona SUV and the SEAT Mii hatchback.

Say the name “Bentley” to a car enthusiast and it will likely conjure up images of luxury British automobiles and classic cars such as the 1953 Bentley R Type Continental and the 1956 Bentley S-Type. A 1935 Bentley Mark IV is featured in the James Bond movie From Russia With Love (1963). In fact, James Bond drives a Bentley 4.5-liter sports car in many of Ian Fleming’s classic spy novels.

The company was founded as Bentley Motors Limited by engineer W. O. Bentley in 1919 in Cricklewood, North London. Bentley vehicles won the 24 Hours of Le Mans race in 1924, 1927, 1928, 1929, 1930 and 2003. Despite its proud British pedigree, the reality is that Bentley has  been owned by Volkswagen since 1998. Today, many Bentleys are manufactured at VW’s plant in Dresden, Germany. Volkswagen says that it has invested a total of $2 billion (USD) in Bentley to keep the luxury brand relevant and top of mind with wealthy patrons. With Volkswagen’s support, Bentley is celebrating its 100th anniversary in 2019.

If Volkswagen is Germany’s best-known maker of affordable vehicles, then Audi is Germany’s most well-known luxury car manufacturer. From the A3 sedan to the Q5 crossover SUV and the TT roadster, Audi is a popular luxury car brand the world over. As you’ve surely figured out by now, it’s also a wholly owned subsidiary of the Volkswagen Group.

VW formed Audi in 1969 after it bought the Auto Union from rival Daimler-Benz and then merged the company with German automaker NSU Motorenwerke to form Audi AG. The four rings that comprise the Audi logo represent the four car companies that banded together to create Audi’s predecessor. Today, Audi rivals BMW and Mercedes-Benz as one of the top luxury automobile brands in the world.

Today, French vehicle manufacturer Bugatti is leading the way when it comes to high-end performance sports cars. Models such as the Veyron and Chiron have dazzled both critics and the public, and today Bugatti is truly an aspirational car brand beloved by auto lovers everywhere. Although the car company remains headquartered in the Alsace region of France, Bugatti Automobiles is actually owned by Volkswagen, which purchased it in 1998.

Since acquiring Bugatti, VW has focused the company’s energies on developing high-end concept cars and luxury performance sports cars that sell for well north of the $1 million mark. These VWs — err, Bugattis — are most certainly not for the average buyer. Rather they are owned by rich and famous actors and athletes, as well as royalty and business tycoons. Dare to dream.

Speaking of high-performance cars, Porsche too is a wholly owned subsidiary of Volkswagen. Founded in Stuttgart, Germany in 1931, Porsche has been owned by Volkswagen since its inception. Austrian engineer Ferdinand Porsche, whom the company is named after, actually helped to design the very first Volkswagen Beetle.

Today, Porsche is the most profitable subsidiary of Volkswagen and boasts the highest profit per unit sold of any car company in the world thanks to the popularity of vehicles such as the 718 Boxster, 911, Panamera, Macan, and Cayenne. In 2017, Porsche announced that it had built its one millionth 911 sports car – a true milestone for the company.

Yes, that’s right. Even the mighty Lamborghini is owned by Volkswagen. Arguably the best-known manufacturer of high-performance luxury sports cars in the world (although rival Ferrari would have something to say about that), Italian-based car maker Lamborghini was acquired by VW in 1998, at the same time that the German auto company also acquired controlling interests in England’s Bentley and France’s Bugatti.

Founded in 1963 as a direct competitor to Ferrari, Lamborghini continues its tradition of making gorgeous sports cars that come in the signature colors of red and black. Armed with a V10 or V12 engine, Lamborghinis typically have a top speed in excess of 200 mph and routinely sell for more than $1 million. In 2007, VW issued a news release to announce that Lamborghini had sold 2,580 cars that year, the highest number of cars the company has ever sold in a 12-moth period. Sounds like another good investment from the execs over at VW. 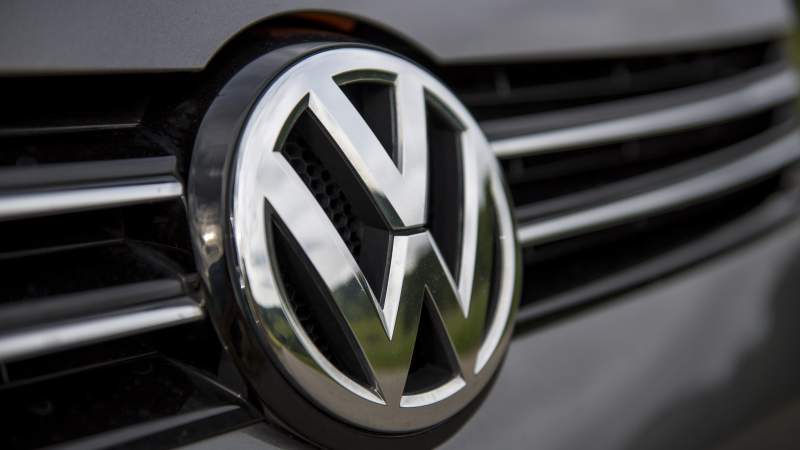