There is seemingly no end to automotive innovations. Engineers and designers are continually pushing the boundaries of what’s possible with vehicles. We are slowly marching us to the inevitable day when all cars, trucks and SUVs are fully electric and self-driving. What only recently seemed like science fiction is fast becoming reality. New innovations continue to push the boundaries of what we can do with our cars. Here is a list of 10 futuristic features coming to a dealership near you — sooner than you think.

Toyota is already developing solar panel roofs for their cars. In the very near future, those panels will be used to help power the car itself. This could prove to be a feature that is both good for the environment and consumers’ wallets. Toyota engineers have been reportedly working on this sunroof innovation for nearly a decade – since 2010. That’s when they unveiled the NORI concept car, which was outfitted with solar panels.

Although Toyota has already gotten a head start over other car makers, there doesn’t appear to be a roll-out date for this technology yet. There are rumors circulating that Toyota Prius models could be equipped with solar panel roofs for the 2020 or 2021 model years. We shall see. But as solar technology gets better, you can expect to see it incorporated into vehicles more and more.

Another innovation being developed by Toyota is multimedia glass. There’s already a promotional video for this technology that shows a young girl drawing shapes with her finger on the glass window in the backseat of a car. The girl even zooms in on the scenery outside, turning the entire window into a live touchscreen tablet.

This technology could have practical implications, as well as providing entertainment. The technology could eventually be paired with turn-by-turn navigation to show drivers on their glass windshields where to turn. This could prevent drivers from taking their eyes off the road to look at a phone or GPS navigation screen. Toyota has already labeled this new technology. They’re calling it “Window to the World.”

Many automakers are already experimenting with using a fingerprint reader on the ignition button to start a vehicle. Some automakers are already looking beyond that, and taking biometric technology a step further. In the near future, people may be able to start their car with the sound of their voice, facial recognition, or through a scan of their retina.

Some other automakers, like Tesla, are experimenting with having cars start automatically once the driver’s seatbelt is fastened, in combination with biometric tech. However cars of the future start their engine, one thing is clear: a physical ignition key will soon be obsolete. Our vehicles will start with technology that has nothing to do with inserting a key and turning it.

Until now, airbags have always been deployed inside a car. However, automotive companies like Mercedes-Benz are developing airbags that can deploy externally, or on the outside of vehicles. The idea is to use them to prevent an accident from happening rather than responding after impact.

Engineers at Mercedes are developing airbags that deploy underneath their cars and SUVs to stop them quicker. Combined with automatic collision detection and emergency braking, an external airbag will deploy under the front bumper to stop the car in a hurry. It may sound strange, but Mercedes is betting that exterior airbags that sense an accident and deploy beforehand will make every driver safer. They might even save the interior airbags from having to go off at all. Apparently, we won’t have to wait long to see this one in action.

Road rage is a big problem, particularly when it comes to accidents. According to the National Highway Traffic Safety Administration, 66% of all traffic fatalities are due to aggressive driving or road rage. Automaker Kia is trying to do something about this problem with a new technology it calls “R.E.A.D.” It stands for “Real-Time Emotion Adaptive Driving.”

This futuristic technology reads the driver’s mood by monitoring a combination of facial expressions, heart rate and blood pressure. If it detects that the driver is in a bad mood, it can adjust the interior of the cabin to try and improve the mood. For instance, the AI system can control the air conditioning to make the temperature in the car more comfortable. The AI could also turn on calming music or even turn on the vehicle’s built-in seat massage feature. This may sound crazy, but it’s where we are headed.

Honda is now developing autonomous all-terrain vehicles (ATVs), incorporating self-driving and autonomous technology into them. Built on top of Honda’s existing ATV frame, this new technology will be able to navigate, drive itself, and travel over any terrain. It’s designed with first responders and search-and-rescue crews in mind.

In an emergency, self-driving ATVs could be loaded with supplies and sent to the frontlines, providing much needed relief. They could even drive people out of dangerous situations. Honda is already testing self-driving ATVs with first responders in California and Colorado.

It’s being called a “mechanic on wheels.” Manufacturers like Toyota and GM are developing technology that will enable vehicles to diagnose their own mechanical problems. Very soon, cars will be able to upgrade their own software when needed and identify their own mechanical issues — researching the best options for a nearby mechanic and even booking itself an appointment.

If that weren’t enough, some cars will also be able to renew their own auto insurance and search for better deals, alerting the owner if they’ve found one. The days of looking under the hood may soon be a thing of the past.

It looks like a sunroof in you car. In reality, though, it’s a screen used to project holographs or entertain passengers with movies, TV shows, and low light displays. Swiss firm WayRay is developing a system that uses smart glass embedded where a sunroof normally be to provide widescreen projected images in high definition.

WayRay, which also develops high-tech HUD displays for cars, sees these holographic sunroofs as the future of in-car entertainment. Of course, they’ll have to find a way to prevent passengers from hurting their necks when looking up at the screen. But otherwise, this looks so cool!

BMW is leading the charge with augmented reality dashboards that will display important information directly to drivers. Think of this technology as a more advanced version of the displays that are currently used in many cars.

These dashboards will be able to provide information like a car’s speed, fuel level, and distance to their destination. They’ll also be able to scan objects on the road ahead. Soon, the dashboard will be able to tell a driver how far away they are from the next car or other objects around the vehicle. BMW has already released some vehicles with a head’s up windshield display. A fully augmented reality dashboard and windshield can’t be far behind. The future is now.

Flying cars may still sound like something out of the movie Blade Runner or the classic cartoon The Jetsons, but some car companies are actively working on concepts. According to media reports, Volvo, Airbus, and Uber are all exploring development of flying cars that will shuttle us around.

A recent report suggests that Uber plans to begin testing flying taxis as soon as 2020. Other reports say that Hyundai is now starting to develop flying car technology with the aim of building and marketing their own fleets of air taxis. Indeed, Uber has already launched a helicopter taxi service in major cities such as New York and Los Angeles. Taking to the skies looks to be the future of transportation. And it’s already happening! 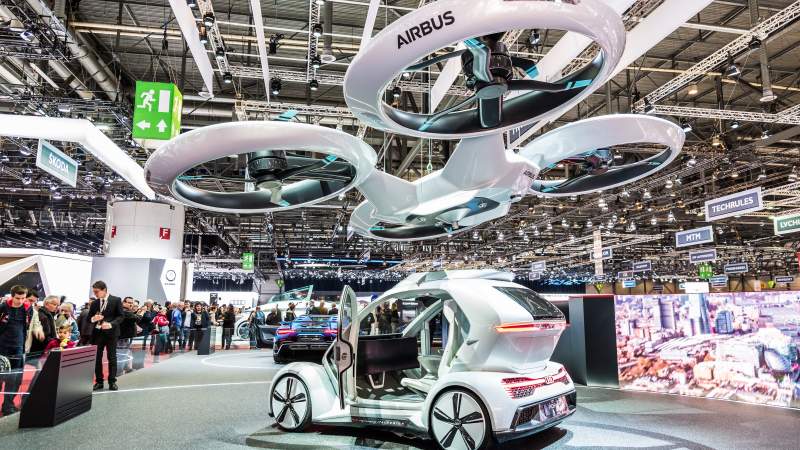