SUVs are renowned for their versatility. They can move like a sedan, navigate off-road like a truck, and seat similar numbers to minivans. That said, growing urban populations created desire for SUVs intended more for passenger transport than off-roading, setting the foundation for the crossover SUV.

While these SUVs maintain the same versatility as the rest of the larger class, they lean towards use by urban commuters and professionals who need to get their families around. They’re often fuel efficient and larger in size than conventional SUVs, sporting stronger engines under the hood.

Announced January 2019, the Cadillac XT6 is the first in its line. Releasing in mid-to-late 2019, the XT6 promises to be a stellar showing from an automotive manufacturer who has proven their chops in the past.

The XT6 will be equipped with a 3.6-liter V6 engine that puts out 310-horsepower and 271 lb/ft of torque, resting comfortably under the hood of a sporty frame with three rows of seating. If previous SUV offerings from Cadillac are any indicator, the XT6 should have the maneuverability to navigate comfortably on the road. Plus, with the high horsepower, it should have no trouble accelerating. If you upgrade to the Sport, you’ll receive advantages like twin-clutch all-wheel-drive and sports accents made from high-quality carbon fiber. As far as fuel economy goes, we have yet to receive estimates.

Leather upholstery and other premium materials are paired with a touchscreen Infotainment system likely to contain a full suite of driver convenience features. Similarly, Cadillac’s suite of safety technologies will be applied to the XT6, ensuring that your ride is pleasant and safe in equal measure. The Luxury Premium trim boasts interior accents made from exotic woods and additional upholstery colors, making this a truly customizable and appealing crossover SUV.

Like the XT6, the 2020 Hyundai Palisade is the first of its class. Intended to replace the Hyundai Santa Fe XL, this crossover SUV will become available to the broader marketplace during summer 2019. Trims and pricing haven’t been released for the Palisade, but more information should become available as 2019 progresses.

The Palisade will feature a 3.8-liter V6 engine paired with an eight-speed automatic transmission. Boasting 291-horsepower, this crossover SUV comes standard with front-wheel-drive but will offer all-wheel options for the travel-minded. It’s one of the beefiest crossovers of the year. Therefore, you should expect it to handle accordingly. With that said, initial reviews indicate the steering is adequate for the class. As with the XT6, details on fuel economy for the Palisade are spotty at best.

The Palisade seats eight in three rows of bench seating, complete with power-adjusting middle seats to allow easier access to the rear row. Available in Nappa leather, these seats make the interior spacious and cozy, suitable for large families or road trips. Standard safety features include a high-tech collision avoidance system and “smart” cruise control that can even stop and start the vehicle.

Infotainment systems are expected to set a new standard for the class, fully digitized with the option of a 10.25-inch touchscreen that outmatches the vast majority of competitors.

There is more information on the 2020 Lincoln Aviator than the rest of the year’s releases. This wealth of information indicates that the Aviator will continue to meet the standards set by previous years. Paired with a twin-turbocharged 3.0-liter V6 and 10-speed automatic transmission, the Aviator sits comfortably at 400 horsepower, which is impressive for the class. A hybrid engine is releasing late summer 2019 with the Black Label Touring trim, which boosts an already substantial horsepower to 450 hp.

Fuel economy information will be released shortly before release, although Lincoln intends to limit access to the hybrid-only version’s statistics until the vehicle is released.

The Aviator comes standard with cruise control and an auto-dimming rearview mirror, as well as a wide range of other cabin advantages. It’s also equipped with one of the season’s largest standard touchscreens at 10.1 inches and ambient cabin lighting. Standard safety features include forward collision warnings and a rear-view camera that washes itself. One of the Aviator’s most notable features is that the navigation system will actually highlight nearby gas stations when the tank runs low, ensuring you never end up stranded.

First introduced as a concept in 2016, the Telluride has spent three years preparing for its spring 2019 release. Awarded the Best of Show at the 2019 Detroit Auto Show, SUV enthusiasts have been eagerly awaiting the release of this five-door SUV.

Equipped with a 3.8-liter V6 engine and front-wheel drive on most models, the Telluride is a cool and comfortable ride that accentuates the passenger-driven intentions of the class. The SX trim offers all-wheel-drive as a standard, while all other models will need to pay an additional $2,000 for the feature.

The Kia Telluride’s base model has been evaluated by the EPA for 20 mpg in the city and 26 mpg on the highway. These ratings set them at a relative class average, making the Telluride an acceptable choice for those who aren’t particularly prone to stressing over gasoline.

The interior of this luxury crossover SUV varies in specifics based on the trim in question, but all trims are outfitted with quality materials and a sufficiently roomy interior to fit at least eight people. A 10.25-inch infotainment touchscreen is available to navigate the suite of Kia driver assistance features, which include systems to amplify a driver’s voice to the rest of the car and speakers that only project into the front seat. Safety features are relatively standard for the class, boasting features like blind spot monitoring and highway lane assists.

Although exact information on the 2020 Ford Explorer‘s powertrains has yet to be revealed, the engines available are expected to sit between 300 and 400 horsepower. The standard offering is a 2.3-liter four-cylinder engine paired with a 10-speed automatic transmission, which offers adequate acceleration and powerful handling on the road.

The EPA has evaluated the hybrid model of the 2020 Ford Explorer and issued a combined rating of 23 mpg, fitting the industry standard and placing the Ford Explorer at a roughly average mark.

On the interior, however, the Ford is nowhere near average. Ford has proven their commitment to their customers with a suite of safety features under the Ford Co-Pilot360 banner, supporting drivers in their every effort as they navigate the roadways. 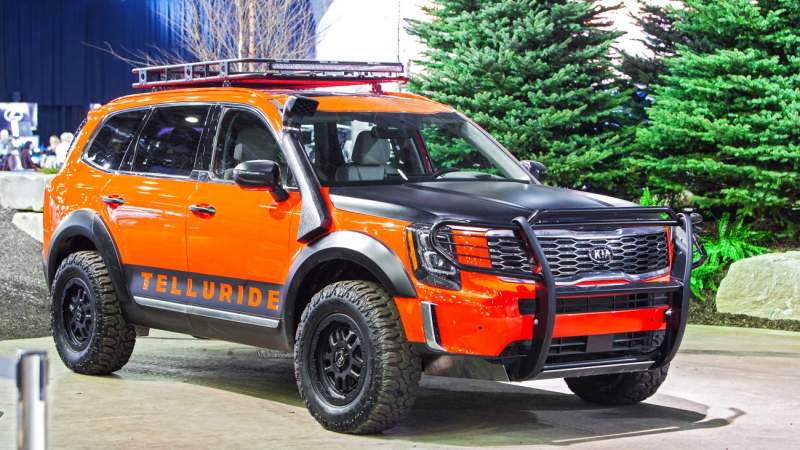