This New Ferrari Supercar Will Blow You Away

Ferrari has unveiled a new supercar called the SF90 Stradale, and it will blow you away. Critics have called it the “first Ferrari of the 21st Century” because of its innovative technology and engineering. But make no mistake, the SF90 Stradale is a Ferrari in every sense of the word. One look at its iconic design and trademark red color and it is obvious that this is a Ferrari through-and-through. This supercar really differentiates itself under the hood, and its performance is what makes it standout from the competition. Here’s what you need to know…

What has left many people in the auto industry gobsmacked is that the SF90 Stradale is actually a plug-in gas/electric hybrid vehicle. Many analysts and pundits doubted that a hybrid supercar could ever be made without sacrificing engine power and performance. With the SF90, Ferrari proves the skeptics wrong.

Despite being a hybrid vehicle, the SF90 Stradale still produces 986 horsepower thanks to an updated version of Ferrari’s famous twin-turbo V8 engine. The car gets an additional boost from three e-motors that crank out a combined 217 horsepower. An F1-derived Motor Generator Unit Kinetic engine is located between the engine and gearbox, and another two motors can be found on the front axle. This powertrain has enabled Ferrari to deploy torque vectoring and all-wheel drive performance in the SF90.

In terms of the battery, the SF90 has a 7.9 kWh lithium-ion battery that gives the car 16 miles of range in the all-electric mode. The bottom line is that this is a supercar that not only performs but is better for the environment too. Win-win.

It’s the Fastest Ferrari of All-Time

The innovative motor design and massive horsepower makes the SF90 Stradale the fastest production Ferrari of all time (obviously not counting their F1 cars or anything like that). That they have accomplished this in a hybrid model is mind blowing. Engineers at Ferrari say that the all-wheel drive capability and extra engines enable the SF90 to go from 0 to 62 miles per hour in just 2.5 seconds.

The car can hit 124 miles per hour in 6.7 seconds, and the SF90s top speed is 211 miles per hour. Ferrari engineers say the SF90 surpasses its next fastest production car, the Limited Series LaFerrari. Around a standard racetrack, the SF90 Stradale beats the LaFerrari by 64 metres per lap due to its incredible speed and torque.

The Aerodynamics Are Amazing

Another reason the SF90 performs so well is that its aerodynamics and downforce are unlike anything we’ve seen before. The SF90 Stradale produces a stunning 390 kilograms of downforce at 155 miles per hour, helping to keep the car firmly planted on mother earth.

This downforce has been achieved by Vortex generators, a wing-section front bumper and two diffusers ahead of the front wheels that combine to produce ample front-end downforce. In the rear, the engine cover features a suspended wing divided into two sections, the forward section of which can lower, acting as a gurney flap to increase downforce. Overall, the SF90 has incredible aerodynamics that allow it to tightly hug corners even at top speeds.

There Are No Door Handles

In terms of design elements, one of the more interesting choices made by Ferrari has been to do away with door handles. There are none on the SF90 Stradale. In their place, Ferrari has created an all-new key that allows for both keyless entry and exit from the vehicle. Ferrari has called the removal of door handles an “elegant solution”. To gain entry to the SF90, owners will have to approach the car with the key in their pocket, push their fingers through a panel on one of the doors, flick a pressure pad and voila. You’re in the car. Sounds reasonable.

A Lighter Weight Model is Available

The SF90 comes in two editions – a standard model and a lightweight model. The “Assetto Fiorano” pack reduces the car’s weight by 30 kilograms and boasts a more aggressive rear spoiler and blown forged wheels. The rims on the lightweight model have radial elements that increase the extraction of air from the wheel and make that air join the flow along the side of the Stradale to reduce the car’s drag, further enhancing its performance. It seems that with the SF90 Stradale, Ferrari has thought of everything.

Moving inside the car, Ferrari has developed what it calls a “Human Machine Interface,” that enables the driver to not only control the SF90 but to literally interact with the machine. The steering wheel contains an amazing number of buttons that may take some time to master — all the buttons in the SF90 are touch-sensitive rather than mechanical.

The starter button is located at the bottom of the steering wheel. Speaking of the steering wheel, it rests in front of all new 16-inch curved instrument screen that can be configured in many ways, including navigation. Oh, did we mention that the SF90 Stradale also features a head-up display that shows key information and vehicle diagnostics in real time? Impressive!

Millionaires rejoice. The Ferrari SF90 Stradale is priced to start $1.2 million (USD). That is actually relatively affordable compared to other supercars, and when you consider all that this vehicle offers in terms of style and performance.

Plus, unlike past Ferraris, the SF90 Stradale is not a limited series car. As a series production car, the SF90 will be available to anyone with the money to buy one. Take note though, orders are already backing up for the SF90. Ferrari has said that they have received in excess of 2,000 applications to buy the SF90 Stradale. So, act fast and get your order in today. Or just gawk at the pretty pictures of one, if you’re not part of the 1% that blows seven-figures on a flashy car. 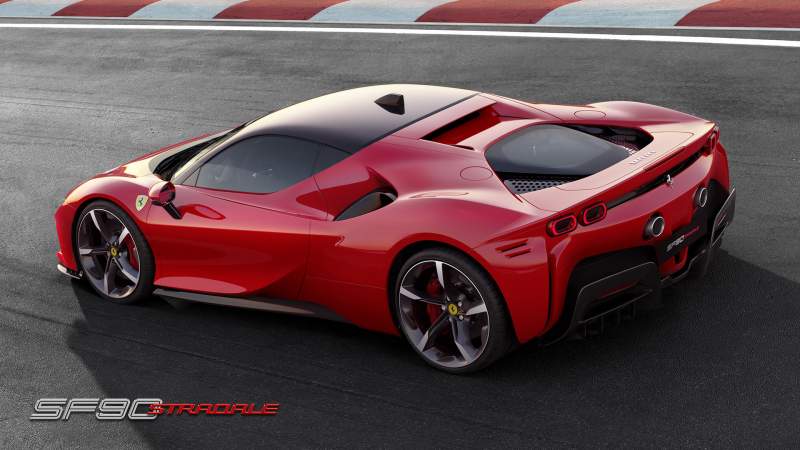