There’s a New Record Time For Driving Across America

You’ve probably heard of the movie Cannonball Run. Starring the iconic late Burt Reynolds, the movie is about an outlaw road race from Connecticut to California. What you might not know, however, is that teams of speed demons have been illegally performing the run in real life for decades. Every once in a while, a new record is set.

The team of Arne Toman, Doug Tabutt, and Berkely Chadwick are the new Cannonball Run champions. Together, they bested the previous record, which has stood since 2013. The previous record, held by Ed Bolian and Dave Black, was 28 hours and 50 minutes. Our daunting new trio smashed that time, coming in at less than 27 and a half hours.

The team drove a 2015 Mercedes-Benz E63 AMG sedan. The car boasted all-wheel drive, a bevy of anti-radar devices, and a custom fabricated fuel cell. We mentioned this kind of thing is illegal, right? The Benz also featured upgraded turbos, downpipes, intercoolers, and instakes. It also had brake light and taillight kill switches. They dumbed down the classy Mercedes appearance by covering up carbon fiber trim with vinyl. The mission was the make the car blend in as much as possible.

Of the three team members, Chadwick’s primary job was the be the spotter. In simple terms, they needed to avoid the cops if they were going to rocket across the country at 160 mph. They ran Waze on an iPhone, and were tracked by three separate GPS devices to prove their time. They also stashed a police scanner and a CB radio in the car. Literally every trick to avoid the law was used. And it worked. 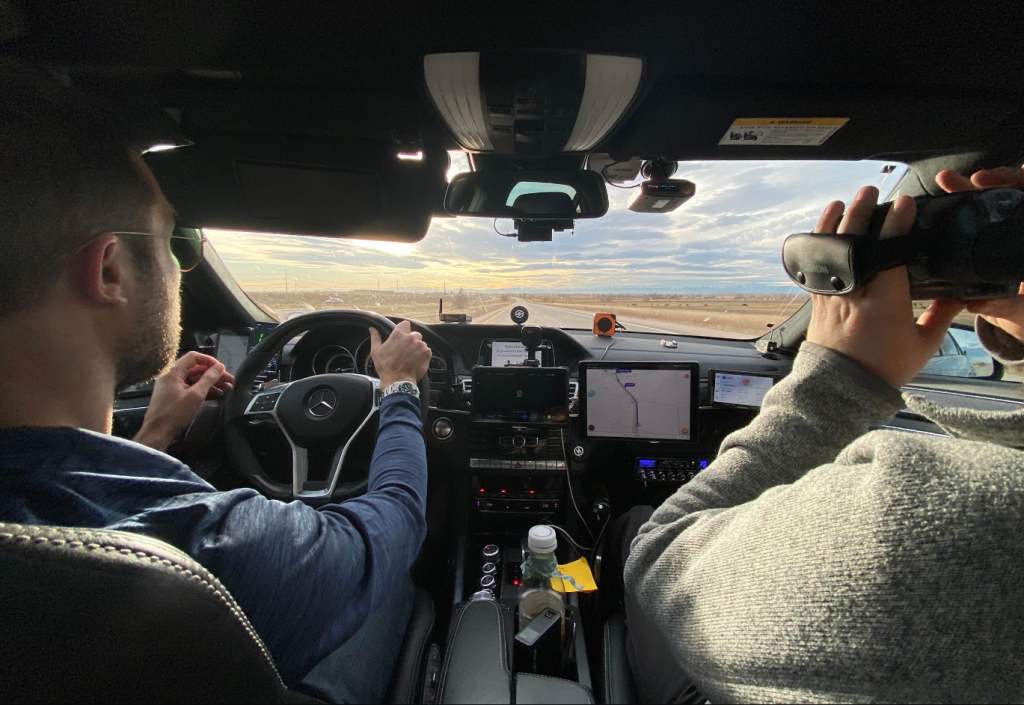 Using their network of friends, partners, former customers, and fans, the team also recruited 18 different lookouts along the run. These volunteers drove miles and miles of roads before the E63 AMG cruised through. If there was any police activity or road slowdowns due to accidents, the team could alter their route ahead of time.

Between careful planing (and a little bit of good luck), the team avoided any run-ins with police. In the end, they drove 2,825.3 miles from New York to the Portofino Hotel in Los Angeles in 27 hours and 25 minutes. They averaged 103 mph, hitting a top speed of 193 mph.

Incredibly, they were only stopped for a little more than 22 minutes the whole run. Obviously, those were refueling stops. However, the modifications made to the Mercedes beforehand meant these stops were ultra efficient. The car’s stock gas tank holds 21 gallons. Their extra fuel tank held another 41 gallons, bringing the total capacity to 62 gallons. United States’ law dictates that gas cannot be pumped faster than 10 gallons/minute. Since the team was only stopped for 22.5 minutes total, they could only pump — at most — 225 gallons into the car. The trip required roughly 270 gallons. Starting with a full tank, that means they only needed to stop for gas 3.4 times while driving from coast to coast. Insane!

Whether you believe Cannonballers to be reckless idiots who endanger other motorists, or heroic figures that test the limits of automotive (and human) endurance racing, the new record is one that should last for quite a while. But will it last forever?

“You have to start and end always with the idea that all records can be broken,” said Alex Roy, who previously set the Cannonball Run record back in 2006. “If you work backwards from there, anything’s possible.”

Here’s a video diary of the whole thing. It’s definitely worth a watch.