The Most Affordable Convertibles On The Market Today

There’s nothing quite like a convertible. Maybe it’s the rush of wind through your hair. Driving with the top down on a summer’s day is a unique and fun experience. Of course, it helps that the majority of convertibles sold today are variations on sport and muscle cars. Therefore, they tend to have extremely powerful engines. However, all that engineering comes at a cost.

Convertibles are not usually cheap. They’re a lot more expensive than traditional family sedans. If you shop around though, you can get your hands on one of the following convertibles. These models tend to be a bit cheaper. Here are the ten most affordable convertible cars on the market today.

The Nissan Roadster has been around for a while now, but it continues to be a bestseller. While it is the most expensive convertible on this list (with a sticker price of $41,820) it is still relatively affordable, It costs about as much as a well-equipped minivan. If you’re in the market for a sporty roadster with some heft and oomph, the Nissan 370Z Roadster is likely to fit the bill.

The 370Z Roadster also has among the most powerful engines on this list, with a 3.7-liter V6 under the hood. It also boasts legendary handling and is a popular car among younger drivers who have been known to use them for street racing. We recommend skipping the racing and instead taking this car for a cruise along the ocean shoreline.

BMW’s peppy 2 Series is the perfect car for a convertible. It’s sporty, nimble, and has great handling and responsiveness. It also looks great, is comfortable, and pretty darn fast. The 2 Series has a 2.0-liter twin-turbocharged four-cylinder engine, plus the excellent driving dynamics that are expected from German engineering.

It also has a lovely drop top that folds down or raises in a scant 22 seconds at speeds of up to 30 miles per hour. Not too shabby. As BMW says on its website, the 2 Series Convertible is for people who don’t like to slow down. We couldn’t agree more. Add in the latest technology and safety features and this is a convertible worth owning. It could be yours for under $40,000. This car is nicely equipped at a base price of $38,950.

Cabriolet is another word for convertible, and the Audi A3 Cabriolet is a convertible worth owning. For nearly the same price as the BMW 2 Series ($38,350), you get one of the finest Audis on the road today. The 2.0 liter turbocharged engine is quite fast, and the handling is exceptional.

The car also comes with 17-inch aluminum wheels, a responsive and user-friendly touch response infotainment system that has a large 10.1-inch touchscreen to control navigation, as well as an excellent 15-speaker Bang & Olufsen audio system. Apple CarPlay and Android Auto come standard, as does Audi’s “Virtual Cockpit” that provides a 12.3-inch digital gauge cluster that has won plaudits from critics. Did we mention the brushed aluminum and matte wood trim that is tastefully sprinkled throughout the cabin. We could go on.

Dropping down considerably in price, we come to the Buick Cascada. It starts at a competitively priced mark of $33,995. While it may not be the sportiest or fanciest luxury convertible on this list, the Cascada beats European competitors such as Audi and BMW on price and still largely equals them on comfort and features.

The Cascada is superior to many other convertibles on this list in terms of its cargo space. The trunk on this convertible can fit more than one golf bag, for example. Plus, the Cascada scores points for having among the quietest cabins of any convertible on this list. When assessing value, price and comfort, the Buick Cascada deserves consideration. And some respect.

Now we come to a convertible that is likely to be high on many people’s list to own – the Ford Mustang. You might be surprised to find out that they can get into a Mustang convertible for just over $30,000 — $32,990 to be precise. Many of the most hardcore car enthusiasts assume wrongly that this classic muscle car costs a lot more. It doesn’t.

The current generation of Mustang convertible continues the tradition of offering two awesome engines choices. There’s the more affordable EcoBoost model with a turbocharged inline four cylinder under the hood. Or spring for the upgraded Coyote V8 engine, available in the upgraded GT model. While the V8 engine is more popular, you can’t really go wrong either way when cruising with the top down in this convertible.

Standing right beside the Mustang in terms of both price and performance is its much-loved cousin – the Chevrolet Camaro. Just like the Mustang, the Camaro is a legendary muscle car that has legions of fans all over the world. You can slide behind the steering wheel of a Camaro convertible for $32,495. Affordable, to be sure. However, this is still a muscle car and the convertible version drives like one too.

Refreshed for the 2019 model year, the Camaro convertible too has an impressive engine. It features a turbocharged four cylinder in the lowest trim level. Much bigger and more powerful engines, including a V8, are available at higher trims. Unlike its Mustang rival, the Camaro still provides a V6 engine option. Buyers who don’t want to spend extra on a V8 love this choice. This is another powerful performance convertible that costs a lot less than people assume.

There’s quite a large cult forming around the Mini Cooper. The same foes for the Mini Convertible, which is often listed as one of the most fun cars to drive.That fun can be had for a relatively inexpensive entry level price of $27,750.

At that price, owners get a premium brand that is well-engineered, loaded with technology, and good on gas. Plus, the folding roof provides plenty of top-down fun. Reviewers cite the peppy engine options and slick interior when calling the Mini Convertible a “premium car.” For under $30,000, we call this convertible a damn good deal too.

Sadly, the iconic Volkswagen Beetle has been recently discontinued. The “Love Bug” was hoisted onto the chopping block by the bean counters at VW earlier in 2019. However, despite no longer being produced, there are still plenty of VW Beetle convertibles available to buy, including newer ones from the 2019 model year.

Priced at $26,890, it’s hard to go wrong with this car. A gently used one will be even less. Of course, being a VW Beetle, the convertible retains all of the retro 60s charm that people expect from this brand. It also has comfortable seats and is a smooth ride for its size. As with every Beetle, there isn’t a lot of cargo space and the back seats are a wee bit cramped. But at this price, these complaints can be easily overlooked.

The Crown for most affordable convertible goes to the Fiat 500C, which can be purchased new for $16,490. Now that is a bargain! Mind you, this car is not your typical convertible. Unlike the other entries on this list, the Fiat 500C is neither a sports car or a muscle car. It doesn’t have any of the style or power of some of the cars mentioned previously on this list.

With a slightly higher price point of $26,650 is the Mazda MX-5 Miata. Although it’s not the cheapest convertible on our list, it might be the best bang for your buck. That’s why we saved it for last. The Miata convertible been a fan favorite for decades. It’s one of the most popular convertibles around today – largely owing to its sleek style and low price point.

The current MX-5 version amplifies all the good points of the Miata that car enthusiasts love. A true roadster, the 2019 MX-5 comes with a revised engine that delivers more power and torque, plus a higher redline. The convertible also retains its style, handling, and comfortable interior. The 2019 model also has an impressive and intuitive infotainment system. While not a critical darling in some circles, the Miata convertible remains popular with Joe Public. Not a surprise, given the price. Plus the fact that, you know, it’s a convertible. 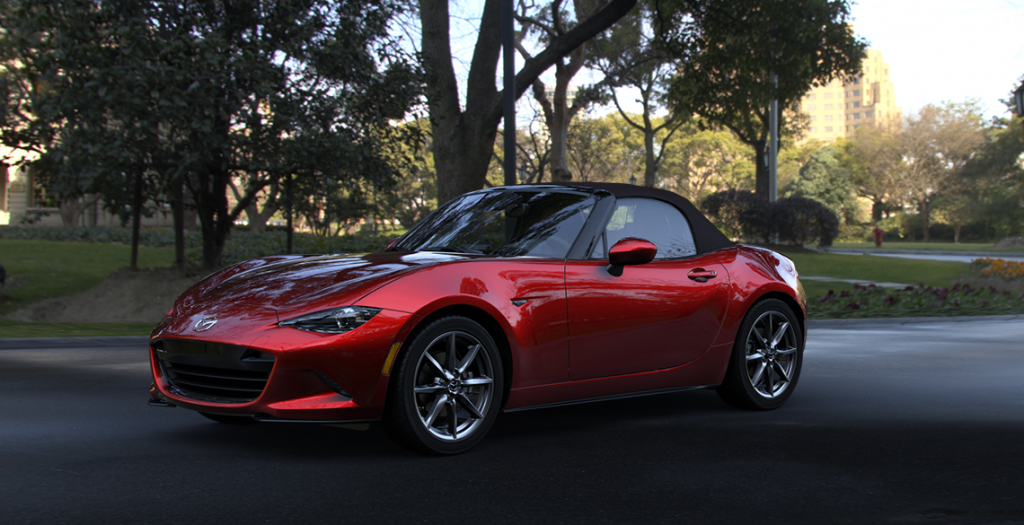