There are so many factors that must be considered when buying a car. The way it handles, fuel economy, safety features, trunk space. The list goes on and on. But sometimes, you just have to throw practicality out the window and focus on one all-important stat: speed. There’s a perception that the auto industry is moving away from high-performance vehicles in favor of practicality. To anyone making this argument, we’d simply like to ask: have you looked at new vehicles lately?

Manufacturers are still very much in the business of making fast cars. If anything, they’re actually becoming more affordable. While you’ll never find a Lamborghini or Ferrari for less than six figures, there are a surprising number of high-performance cars that can be had for under $100,000. If you’re looking for something that goes fast, you’ve come to the right place! Today, we’re counting down the fastest cars under $100K.

Note: For simplicity’s sake, the list has been arranged in order of fastest 0-to-60 miles per hour times, not price. In general, the fastest cars are the most expensive, but there are some surprising exceptions.

Originally released in 2009, Nissan’s 370Z has seen little real change in its 11 year existence. That isn’t necessarily a bad thing. From day one, the 370Z has delivered an outstanding driving experience at a modest price. The base model delivers over 300 horsepower for less than $30,000 but if you’re looking to really blow your hair back, the Nismo’s where it’s at. The Nismo’s naturally aspirated VQ 3.7 liter V-6 jumps to 350 horsepower, reaching 0-to-60 mph in 5.2 seconds. While the 370Z lags behind the competition when it comes to safety features and the “newness” factor, it’s still one of the best performance bargains out there.

At a base price just shy of $100k, the Porsche 718 Spyder just fits within the parameters of our little experiment. Realistically, this car will tip you over the $100k mark if you opt for anything other than the base model. However, the Spyder is just such a fine sports car that we couldn’t leave it off the list. With 414 horsepower output and a top speed of 187 mph, the Spyder is the most powerful Boxster Porsche has ever produced. While quite fast in a straight line (0-to-60 mph in 4.2 seconds), it’s the way the Spyder drives — the gearbox shifts like a dream — that makes it worth the admittedly high asking price.

After a decade of teases and false starts, Toyota finally brought back the legendary Supra last year. With impressive performance and sleek styling, this updated ride more than lives up to the Supra name. Perhaps the best part is just how much car you get for the price. Capable of reaching 0-to-60 mph in 3.8 seconds and hitting a quarter mile in 12.3, the Toyota Supra’s base price of just over $50K is hard to pass up. The lack of manual transmission is disappointing but it’s not a dealbreaker by any means. That being said, you could always hold out and hope the rumors of Toyota releasing a stick version later in the production run prove to be true.

Looking at the Lotus Evora GT, you’d never know it sports the same engine that powers the top-of-the-line Toyota Camry. While that kind of description might give you pause, it fails to convey what’s really going on under the hood of this striking green performance car. The Evora’s V-6 is supercharged and tuned to 416 horsepower. That gives it the ability to go 0-to-60 mph in 3.8 seconds. Now let’s see a Camry do that!

As the only Lotus model currently being offered in North America, the Evora GT is pretty much your only option if you don’t want to import. However, if you’re looking for a sports car that doesn’t compromise when it comes to the driver experience — Lotus pridefully boasts that the Evora GT is “practically imperfect” — this is the car for you.

Packing a twin-turbocharged 4.0 liter V-8, the Mercedes-AMG C63 is one of the most impressive sports sedans out there. The $73,000 asking price for the S class gets you a whole lot of car, as well as a suite of technological innovations including a large infotainment screen and nine-stage traction-control software. While the C63 has the look of your typical European luxury sedan, its 503 horsepower engine leaves no doubt this is one serious sports car. The S class is no slouch on the track, capable of doing 0-to-60 mph in 3.7 seconds and a quarter mile in 11.9.

Sadly, 2019 was the final year for the TT model. That’s a shame, since this diminutive Audi is one speedy beast. The TT RS is powered by a turbocharged 2.5 liter five-cylinder engine (no, that’s not a typo) with 394 horsepower. Combined with all-wheel-drive and sharp handling, the Audi TT RS is a fun drive —especially when you put the pedal down. The five-cylinder engine gets the TT RS from 0-to-60 mph in 3.6 seconds and down a quarter mile stretch in just under 12. Audi is replacing the TT with an electric sports car that promises to be just as zippy. However, if you crave the combustion engine feel, grab this beloved bubble car while you can!

There’s nothing subtle about the Hellcat. The most powerful version of Dodge’s Challenger muscle car, the Hellcat’s supercharged 6.2 liter V-8 engine with 717 horsepower was built for pure speed. Indeed, this car is terrifying in a straight line, hitting 0-60 mph in 3.6 seconds and the quarter mile in just under 11.

The Hellcat starts at $63,000 and climbs all the way to $80,000 for the Redeye Widebody. Although the Redeye pumps out an absurd 797 horses, it’s not worth the money. As Car and Driver point out in their review, the Redeye isn’t any quicker than the standard Hellcat. Instead, go with the $69,000 Widebody version, which not only looks cooler but offers improved handling.

The beastly Cadillac CTS-V is the fastest super-sedan you’ll find priced under $100k. Its supercharged 640 horsepower 6.2-liter V-8 will get you from 0-to-60 mph in 3.6 seconds. It also hits 0-to-100 mph in an impressive 7.5 seconds. The CTS-V drives like a muscle car wrapped in a luxury package. The steering is responsive and the numerous electronic safety features make this Cadillac manageable for drivers of all skill levels. However, the double-clutch automatic transmission is a bit rougher than what you’ll find in other sedans at this price level. Then again, if you’re in it for the speed, a rougher ride is more than worth the tradeoff.

The alpha dog of the Camaro family, the ZL1 drives as aggressively as it looks. This may have something to do with the fact this bad boy is saddled with a Corvette Z06 engine and delivers the kind of performance you’d expect from a ‘Vette. The 650 horsepower supercharged V-8 takes the ZL1 from 0-to-60 mph in an eye-popping 3.5 seconds. It will complete the quarter mile in 11.4 seconds. Best of all, the ZL1 costs considerably less than a new Corvette. Starting prices for the coupe are $65,000 and climb to $71,000 for the convertible.

Much like the 718 Spyder, a Porsche 911 Carrera can only be had for under $100k if you play your cards right. While it’s priced higher than any other car on this list, the 911 Carrera’s power and performance more than justify the cost. The base Carrera is armed with a 3.0-liter twin-turbo flat six engine pumping out 379 horsepower and can go 0-to-60 mph in under 3.5 seconds. Unfortunately, the 2020 model starts well over $100k. You might have to track down a 2017 Carrera to stay on budget.

When it comes to the new GT500, you just need to know one number: 760. That’s how much horsepower the 5.2-liter V-8 engine cranks out. That makes the GT500 the highest-horsepower Mustang ever produced. Actually, here are a few numbers you might want to know. The Ford Mustang Shelby GT500 can hit 0-to-60 in just 3.3 seconds and complete a quarter mile in 10.6. It also starts at an asking price of $74K, so it’s definitely not cheap. Then again, anyone looking for the most powerful Mustang ever is probably willing to fork over a little extra.

Let’s start by admitting that the Z06 isn’t the fastest Corvette money can buy. That would be the outrageous ZR1, which has a starting asking price of $121K. However, when it comes to cars priced under $100K, nothing beats Chevy’s latest Z06. American supercars are often derided for being all power and no performance, but the Z06 is different. Its acceleration and cornering capabilities are on par with the Porsche 911s of the world. And at a lower price to boot. The Z06 is also the only sub-$100K car that can hit 0-to-60 mph in less than three seconds (2.95 to be precise), making it the fastest car in its pricing tier. 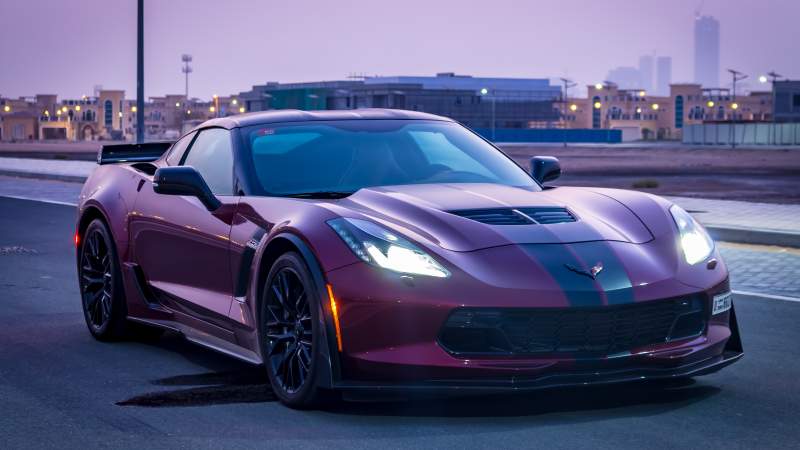