The 2018 Subaru Forester: An Affordable SUV More Capable Than Most

Over the past decade, Subaru has grown from a niche brand into a major force in the auto industry. A lot of the automaker’s recent success is due to the Forester, its largest SUV and second-best selling model. The Forester has been on a roll, with sales increasing every year since 2011. The crossover is beloved by many for its practicality, standard all-wheel drive, and affordable price.

If you’re in the market for a new SUV, here’s everything you need to know about the 2018 Subaru Forester.

Like all Subarus, the 2018 Forester is powered by a four-cylinder boxer engine. There are two engines on offer. The entry-level 2.5-liter unit makes 170 horsepower and 174 lb-ft of torque. This engine is standard on the 2.5i, 2.5i Premium, 2.5i Limited, and 2.5i Touring trims. The 2.0XT Premium and 2.0XT Touring get the turbocharged 2.0-liter from the WRX sedan, which pumps out 250 horsepower and 258 lb-ft of torque.

While the base engine is a bit underpowered, it’s more than capable of getting you from point A to B, if a bit sluggishly when fully loaded. However, if you plan to load the Forester up with people and cargo, you might want to consider the more powerful 2.0-liter turbo engine.

The 2018 Subaru Forester comes standard with all-wheel drive, or Symmetrical All-Wheel Drive as it’s officially called. Standard AWD has been the automaker’s edge for years. On the top-tier Forester — the 2.0XT Touring — the AWD is augmented by an active torque vectoring system. This feature limits understeer by automatically applying a bit of brake to the front inside wheel during cornering. This system is only available on Subaru Forester 2.0XT Tourings released after 2017.

In addition to AWD, Subaru offers an optional off-roading system called X-Mode. X-Mode is designed to increase traction on rough terrain and is paired with hill descent control. While the 2018 Forester is far from a true off-roader, these features, plus its standard 8.7 inches of ground clearance, easily enable it to head off the beaten path with confidence.

Despite its size, the 2018 Forester gets outstanding gas mileage. Foresters equipped with the 2.5-liter boxer engine get up to 32 mpg on the highway and 26 mpg in the city. The more powerful turbocharged engine returns numbers that are not nearly as nice but still respectable, 27 mpg highway and 23 mpg city. 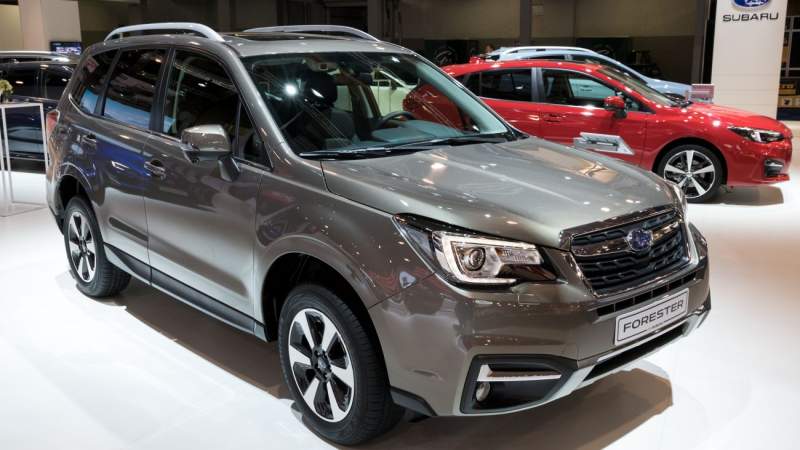 What Inside: Storage Space, Tech, And Cabin Quality

The 2018 Subaru Forester comes standard with seating for five. Thanks to its boxy design, the Forester offers a wealth of cargo space. There is 34.4 cubic feet of storage space with all seats up. That figure more than doubles to 74.4 cubic feet when the rear seats are folded up. These figures aren’t class-leading, but they are well above average and put the Forester’s cargo space within striking distance of some smaller three-row SUVs.

All 2018 Foresters come standard with a 6.2-inch touchscreen infotainment center. A larger 7.0-inch screen is also on offer. While the Forester’s touchscreen is nicely sized, both Apple CarPlay and Android Auto are not on offer. What the Forester lacks in entertainment tech, it more than makes up for with available safety tech.

With the exception of the entry-level Forester, all trims offer Subaru’s EyeSight suite of safety tech. EyeSight is made up of adaptive cruise control, pre-collision braking, and pre-collision throttle management. Unlike in other cars, the camera Subaru utilizes to power EyeSight is mounted inside on the windshield, which helps the system operate better since the camera isn’t obstructed by rain and debris.

The 2017 Forester received an updated version of EyeSight, which added lane-keep assist, blind spot detection, and rear cross traffic alert. For the 2018 model year, EyeSight is standard on the 2.5i Touring, 2.0XT Touring, and 2.0XT Premium trims. The tech is an available option on all other trims, save for the entry-level 2.5i model. The 2018 EyeSight-equipped Forester was an IIHS Top Safety Pick+.

One of the biggest knocks against the Forester is its cabin quality. Many reviewers have noted that it lets in too much noise at highway speed and also dinged Subaru for using cheap plastic throughout. While cheap plastic abounds, the SUV does offer some nice features. With the exception of the entry-level trim, all Foresters come standard with a panoramic moonroof. Available luxury features include heated leather seats, a power liftgate, power-folding rear seats, a heated steering wheel, voice-activated navigation, and a Harmon Kardon audio system.

The 2018 Subaru Forester has six trim levels to choose from and starts at $22,795 for the 2.5i model. The priciest trim is the 2.0XT Touring with a base price of $36,090. If you don’t care about an underpowered engine, the 2.5i Limited is the trim to go with. It starts at just under $30,000 and come standard with a leather interior, heated front seats, along with blind spot detection and rear cross traffic alert.

Should you want the more powerful 2.0-liter turbocharged engine, the 2.0XT Premium is the way to go. In addition to the bigger engine, the model also offers 18-inch wheels, heated front seats, and a leather-wrapped steering wheel and shifter, all for $29,495.

At under $30,000, the Forester is a pretty good deal. Going beyond that price point, which means purchasing either the 2.5i Touring (base price of $33,090) or 2.0XT Touring, and the Forester’s lack of luxury, tech, and underpowered engine become hard to ignore.

The 2018 Subaru Forester competes in a very crowded segment against the likes of the Honda CR-V, Mazda CX-5, Ford Escape, Toyota RAV4, Hyundai Tucson, Kia Sportage, and Nissan Rogue. When it comes to available technology and luxury, the Forester lags a bit behind the pack. While its 2.5-liter turbocharged engine is spirited, the 2.0-liter power plant could do with a bit more oomph. In a world of sleek, svelte, and curvaceous crossovers, the Forester’s boxy design stands out, and not always in a good way. Yes, EyeSight is a standout, but similar safety tech is offered by other automakers.

What makes the 2018 Subaru Forester so attractive are its capabilities and price. At $22,795, the entry-level Forester is cheaper and much more capable than almost all of its competitors, including the CR-V, CX-5, RAV4, and Rogue.

If you’re looking for a capable SUV with plenty of storage space, standard all-wheel drive, and affordable pricing, you definitely need to check out the 2018 Subaru Forester. 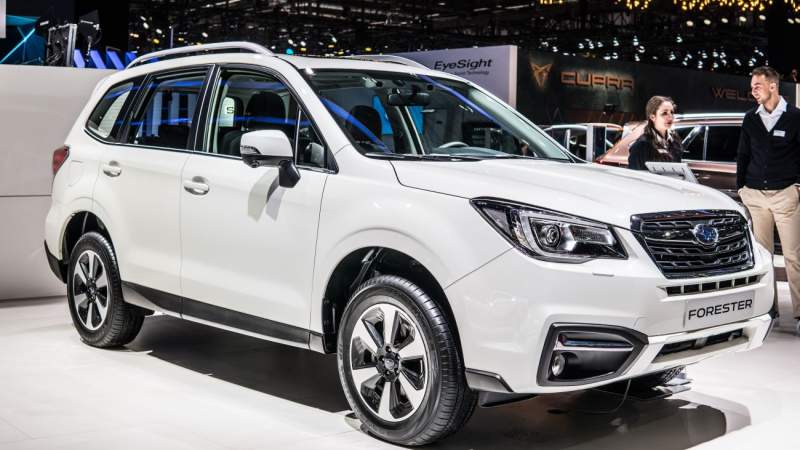