How To, Top Cars

The 10 Most Worthless Car Modifications

Today there seems to be no limit to the ways in which people can modify their cars. Commonly known as “car mods,” these are typically cosmetic alterations people can make to their car to customize and make it look cooler. The problem is that most car mods are actually pretty useless and a complete waste of money.

Studies show that car mods also tend to lower the value of a vehicle, since most people don’t want a car that has flames painted on the side or oversized tires and pimped out rims. Truth be told, most car mods leave other drivers scratching their heads and wondering “Why in the world would you do that to your car?” Here’s a list of the 10 most worthless car modifications.

This is the fluorescent lighting you see underneath a tricked out Mazda 3 or Honda Accord hatchback model. You know, the purple or pink glow that is beneath the car and illuminating the road. This undercarriage lighting is known as “Underglow” or “LEDGlow,” and trust us when we say that it is completely useless.

Undercarriage lighting on cars is completely cosmetic and serves no purpose whatsoever. As such, it is a complete waste of money. Yet this car mod is a popular item among young drivers who enjoy watching the Fast and Furious movies and pimping their rides. Sure, the added lighting makes the car get noticed—but for all the wrong reasons. Do yourself and the driving community a favor and avoid this modification. Better yet, save your money and move out of your parents’ basement.

Staying with the lighting theme for a minute, another waste of a car modification are Xenon headlights, or High Intensity Discharge (HID) lights. This lighting is growing in popularity as an alternative to halogen headlight bulbs that are known to produce excessive heat when on for extended periods.

These HID lights may produce less heat than halogen headlights, but the blue-white light emitted by Xenon bulbs is so bright that it has been known to impact the sight of other drivers. Worse, recent tests have shown that HID headlights do not improve road visibility by a significant margin, and that most HID headlights are not wired properly into vehicles. That can lead to the headlights actually being dim and useless. For the expense, this car modification is not worth it. Regular, factory installed headlights will do. We promise.

Another popular item for the car mod crowd is the super annoying spinner hubcap. Meant to turn independently of the wheel, spinner hubcaps are another item that serves no purpose other than to annoy every car you pass on the street. In fact, spinner hubcaps are so irritating that several U.S. States have passed legislative bills to ban them on the grounds that they could be distracting or disconcerting to other motorists, and, as such, represent a safety hazard.

Nevertheless, spinner hubcaps continue to be one of the bestselling items at specialty car modification shops. Some people are even buying them out of state and adding them to their cars even in jurisdictions where they are banned. Sad, but true.

Talk about delusional. Slapping a sticker onto your sedan isn’t going to turn it into a high-end performance model. That BMW 325i isn’t really an M3 just because you placed a sticker over the 325i etching on the rear of the car. Believe it or not, most people can tell it’s a phony.

Despite this fact, a staggering number of people continue to buy performance badges or stickers and slap them on their lower-end model cars. It’s supposed to make others think they are driving a higher-end version of their car, but it’s actually super tacky. We suppose that this is the most affordable way for people to live out their dreams. Nevertheless, it reflects badly on the owner of the car and is a sad, albeit more affordable, waste of money. Really, the only thing this car mod accomplishes is to make people feel sorry for the owner of the sticker covered car. You’re only fooling yourself!

Come on, people. We’re better than this. These are the fake vents, or scoops, that people buy and stick-on the hood of their car to, we assume, make it look like a racing model. Real hood scoops improve airflow through the vents, increasing efficiency of heat and air conditioning. Fake hood scoops are phony pieces of plastic glued on the car, that provide no actual performance boost. Air doesn’t go to the engine or anywhere else.

Yet sadly, stick on hood vents are a bestseller on eBay, where they can be purchased for as little as $5. We know that people want to make their car look cooler, but this is not the answer. In reality, many of these fake hood vents fly off when driving down the highway. Check YouTube and you’ll see the hilarious and pathetic fails when it comes to this cheap and unnecessary car mod.These stick-on hood vents are usually added to cars that are not, in any way, a racing vehicle. That Toyota Corolla does not look like a street racing vehicle with the fake hood vent stuck on it. Please just don’t.

Real car body kits serve a useful purpose. They decrease the weight of a car and make it more aerodynamic and more fuel efficient. This is the case on professional, custom-made NASCAR vehicles. On a Volkswagen Golf, however, a body kit serves no purpose. The reality is that body kits added to ordinary vehicles aftermarket usually end up increasing the weight of a car and make it so low to the ground that speed bumps become a serious hazard. In winter, that car becomes a glorified snow plow.

Most people who splash out for a body kit on their car end up spending an equal amount of money fixing the car after it scrapes the ground and essentially tears itself apart. And don’t get us started on the sparks that can be caused by body kits scraping along the road.

Tinted windows on the side and rear of a car can serve a purpose in that they reduce the glare of the sun and can protect the privacy of children. However, tinted windows everywhere else on a vehicle, including the windshield, are completely useless. They serve no purpose other than to make other people on the road assume you’re a criminal.

In most U.S. states there are legal limits to how dark a vehicle’s windows can be tinted. In some jurisdictions, it is illegal to tint the windshield at all. This is because some geniuses tint their car windows so dark that they are actually hard to see out of and lead to accidents. At night, tinted windows just seem ridiculous. While tinted car windows may look cool in video games or on MTV, they are not practical in real life. Plus, they are expensive—more than $1,000 in many cases. Save your money!

That Scion FR-S is not known for having an engine that roars. Or even purrs, for that matter. In lieu of upgrading the engine, people can add fake engine sounds to their car. For a decent amount of money, people can add a set of speakers under the hood to make it sound like the engine is supped up and ready to rumble.

The car will sound like a boss. Nobody will even know you’re full of it — until you engage in a street race and the limits of your car’s power are exposed. In most instances though, your car will sound like a powerhouse thanks to the fake engine sounds. You’ll also be able to annoy the people beside you at red lights. This car mod is completely unnecessary, useless, and silly. But whoever said being cool required people to be practical or smart, right?

Why? Really, why does your car need bigger than normal wheels? In most cases, the oversized wheels look out of place. In many instances, they expose rusting brakes. Even cosmetically, big wheels don’t look good or add much to a car. A set of 18-inch wheels on a Honda Civic looks ridiculous and adds nothing.

Also known as “low profile tires” these larger tires add nothing of value and need to be stopped. As always, there are laws and limits to how big the tires on a vehicle can be — for safety reasons, of course. That hasn’t stopped many people from trying to cram the absolute biggest tires possible onto their car. Sure, big wheels do get noticed, but always for the wrong reasons. Be smart and stick to the recommended tire size for your car, especially if it is a regular vehicle such as a Honda Civic. Honestly, it’s a Honda Civic.

Is there anything worse than wings on the trunk of a car? If there is, we can’t think of what it would be. Also known as a “spoiler,” the purpose of car wings is to decrease the slope of the airflow path down the back of the car, which purportedly decreases drag, increases mileage and keeps the rear window clean.

In reality, wings and spoilers only serve to make it more difficult to open the trunk. Wings and spoilers look trashy and serve no purpose on most vehicles. The larger the wing or spoiler, the more stupid it looks! Of course, that hasn’t stopped this atrocity from being among the most popular car modifications around. Stop the insanity! 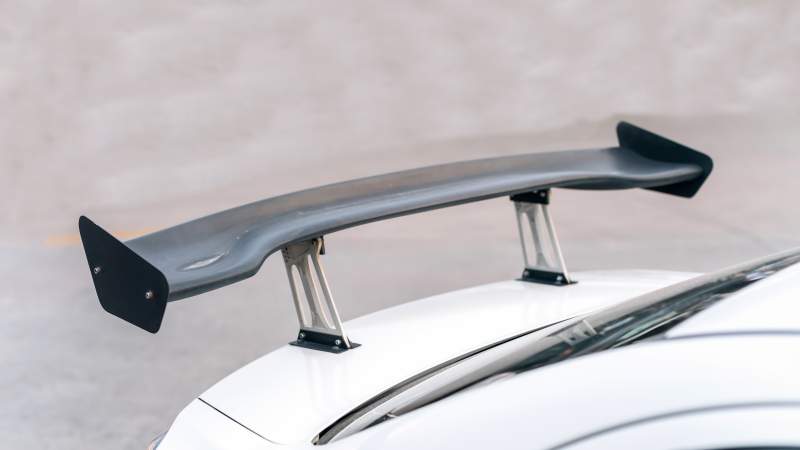