The 10 Best Cars From The New York Auto Show

This year marks the 117th edition of the New York International Auto Show, which has been taking place each spring since 1900, and this year’s show has not disappointed. A number of impressive muscle cars, SUVs, and electric cars are on display in the Big Apple this week. In all, nearly 1,000 cars and trucks are being showcased at the New York Auto Show, which runs until April 23rd. Here’s a look at some of the best cars and biggest trends being featured this year.

Ford unveiled the first new Lincoln Navigator SUV in a decade at this year’s New York Auto Show, and it definitely turned heads. The Navigator was the leading full-size luxury SUV two decades ago, but Ford had let the brand languish for ten years as the company focused on small and mid-sized SUVs. Now, the Navigator is back and seemingly better than ever.

True to its roots, the new Navigator is focused on all manner of luxury, and contains lots of cool features and technology. For example, when a person approaches the new Navigator, the headlights literally “wink” hello. The interior of the SUV is roomy and contains many comfort features, notably 30-way heated and cooled power front seats, and twin rear video screens and a built-in 4G LTE WiFi system.

Throwing a bone to dog owners, Nissan unveiled a new SUV that is aimed squarely at people who love their pets. Called the Nissan Rogue Dogue, it has a number of features aimed at Fido, including clip-in harnesses and non-spill water dispensers, as well as a rear ramp that makes it easy for the family dog to enter and exit the SUV.

Nissan seems to have thought of everything with this new SUV, even going so far as to build in a doggie shower and drying system into the vehicle. Marketed as a “special edition” SUV, it remains to be seen how popular this dog-focused SUV will be with pet owners. It certainly has novelty appeal and garnered a lot of attention at the auto show.

Still referring to it as a “concept” only, Subaru displayed its Ascent SUV in New York, the largest vehicle it has ever designed. A three-row SUV that promises to have plenty of room and comfort, the Ascent also has many luxury features. Subaru sees this vehicle as being the one to help it compete in the highly competitive full-sized SUV market when it rolls off the production line in 2018.

Company executives have promised that the Ascent will be lavish in style and well-equipped with technology, including a rear entertainment system designed to keep the family happy while parents drive. Plans are for the Ascent to be built at Subaru’s production plant in rural Indiana.

Honda is keeping its focus squarely on the environment, introducing three models of its green machine, the Clarity FCV sedan. One of only a few hydrogen-powered fuel-cell vehicles currently available in the U.S., the Clarity is mostly being sold and used in California, because of a lack of hydrogen infrastructure elsewhere in North America.

In an effort to help the Clarity catch on and overcome the infrastructure problem, Honda announced this week that it is manufacturing two additional versions of the Clarity to appeal to different segments of the green machine market. The Clarity Electric, a pure battery-electric vehicle with a modest 80 mile range per battery charge, and the Honda Clarity Plug-in Hybrid, which can travel up to 40 miles on a single battery charge before its gas engine fires up.

One of the biggest stories at this year’s New York Auto Show has to be the new line of hybrid police cars unveiled by Ford. The Ford Police Responder Hybrid sedan, which has been adapted from the popular Ford Fusion Hybrid car, has a 2.0L Atkinson-cycle engine that hosts a lithium-ion battery and electric motor.

That makes the hybrid Responder very economical. It gets 38 mpg, which is quite impressive compared to the 18 miles per gallon of gas used by most conventional Ford Police Interceptors. Ford said in a news release that the new hybrid police cars should save local law enforcement departments about $4,000 a year in gas based on a vehicle that drives 20,000 miles per year, runs two shifts per day, 365 days per year, idles 4.9 hours per 8-hour shift, and is fueled at an average gas price of $2.50 per gallon.

One of the most impressive vehicles being showcased in New York is the world’s fastest electric car. Known as the Buckeye Bullet 3, this electric car was manufactured by Ohio State University’s Center for Automotive Research and Venturi Automobile, a boutique European electric car maker. How fast can this car go? The 38-foot long carbon fiber car has reached a record breaking top speed of 358 miles per hour.

This speed record was made possible thanks to 80 lithium ion batteries and four electric motors that, combined, generate 3,000 horsepower. Developers behind the Buckeye Bullet 3 have been showing the car off to New York area students, and have said in interviews that their goal is for the electric car to eventually surpass 400 mph.

Toyota showed that it is serious about expanding further into the SUV market in an effort to capitalize on the renewed popularity of utility vehicles, particularly in the United States. In New York, Toyota unveiled a concept for its new FT-4X SUV, a sturdy looking sport utility vehicle that the company says is aimed at urban road warriors and millennials who want something rugged and tough that is still compact and nimble enough to drive on urban streets.

Essentially, the new FT-4X is designed to be used in the city during the week and then in the wilderness during the weekend. According to Toyota, FT-4X stands for “future truck, all-wheel-drive.” Nifty features included with this vehicle are a center armrest that conceals a sleeping bag, dome lights that transform into flashlights, and a back hatch that swings open like twin barn doors.

While it normally focuses on showing off its performance sedans, this year Mercedes-Benz took the opportunity to focus attention on a new sub-brand of race cars it has developed. Called the Mercedes AMG GTR, the performance race car was developed as part of Mercedes’ new sub-brand labeled AMG, which was started by two former employees who wanted to make faster cars.

Now, there are AMG versions of almost every Mercedes model. The executives and engineers at AMG were showing off a track-ready version of the GT coupe in New York. The Mercedes AMG GTR can produce 577 horsepower and create 520 pound feet of torque while reaching 200 mph with ease. Another sign that this year’s New York Auto Show is all about the horsepower under the hood.

Tesla Motors may have surpassed GM to become the world’s most valuable auto maker, but there are clear signs at the New York Auto Show that Tesla will be facing some stiff competition in the electric car market. This point was driven home by the display of the Lucid Air, an electric car that is aimed squarely  at competing with Tesla. It’s expected to be in full production by 2019.

Boasting a 113-kilowatt-hour lithium-ion battery, executives at Lucid Motors said that they anticipate the Air to have a range of more than 400 miles on a single battery charge. Additionally, the twin electric motors under the hood of the Lucid Air can produce 1,000 horsepower, enough to hit 60 mph in about three seconds.

A prototype of the Lucid Air recently reached an impressive 217 mph, proving that when it comes to electric cars, the focus remains on power. Inside, the Lucid Air is roomy and comfortable, with more interior space than a Mercedes-Benz S-Class. Plus, the Lucid Air is loaded with high-tech features, including a laptop computer-sized touch screen display monitor that allows the driver to operate most of the vehicle’s functions with the touch of a finger. The Lucid Air is expected to sell for about $60,000.

It wasn’t just the ominous name that had people at the New York Auto Show checking out the new Dodge Demon. Journalists, industry executives, and the adoring public have been impressed by the fact that the Demon is the quickest factory-built model ever, producing an incredible 840 horsepower and reaching 60 mph in just 2.3 seconds.

If that weren’t enough, the Demon also has the distinction of being the first street-legal production car certified by the Guinness Book of World Records as being capable of performing a wheelie. Originally designed for race tracks, the Demon is also capable of being used on conventional roads and highways. However, potential buyers should take note that the Dodge Demon comes with only a driver’s seat in the base model. Passenger and rear seats need to be specially ordered separately. 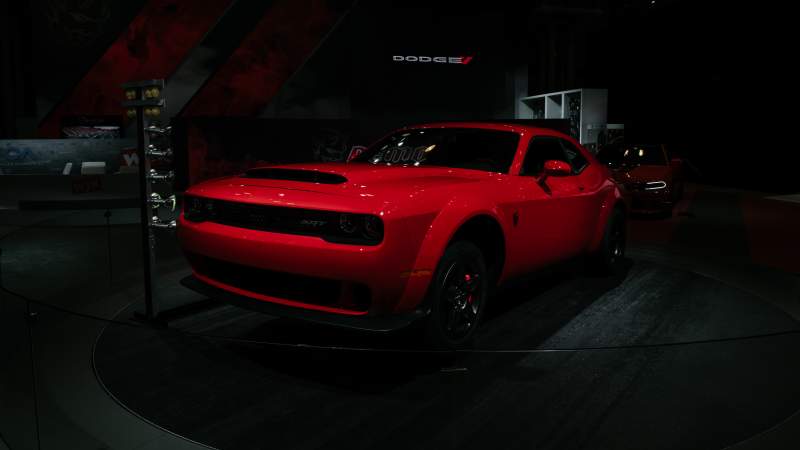