Acura is a manufacturer and seller of luxury sedans, sports cars, and SUVs across the world. The line of vehicles was first introduced with the 1986 model year and has continued to grow in popularity with consumers.

With the 2019 model year, Acura will once again impress consumers and auto critics.

The Acura ILX is a small luxury car that was first introduced in 2013. There is only one base trim with the ILX, which starts at $25,900. However, drivers can choose between a variety of different technology packages that can push the price of the Acura to over $31,500.

There is only one engine option with the 2019 ILX, which is a four-cylinder engine that produces just over 200 horsepower. Despite the power of the ILX, drivers can expect to receive fuel efficiency of 34 mpg when on the highway and 24 mpg when driving in the city.

Starting with the 2019 model year, a wide variety of features were included as standard with the ILX. Some of the basic safety and entertainment features that come with the 2019 ILX are the AcuraWatch safety suite — including a rearview camera and a variety of collision protections — smartphone connectivity, and an upgraded infotainment system. It has a seven-inch touchscreen display to control the car’s features and to act as the rearview camera display.

The Acura TLX is a luxury midsize sedan. The 2019 model year can come in two different trim options: the base and SH trim. With either trim, you can choose between the four or six-cylinder engine, front-wheel-drive or all-wheel-drive, and a good number of different technology packages. While the base trim starts with an MSRP of $33,000, it can cost as much as $44,000 with all options selected. For the SH trim, it can cost up to $46,000.

There are a variety of standard features with the base trim. This includes a seven-inch touchscreen display with infotainment controls, a seven-speaker sound system, smartphone connectivity, and USB inputs. There are also a variety of safety features that are part of the Acura Watch system, including a rearview camera, lane keep assist, forward collision warning, and lane departure warning.

The Acura RLX is a large luxury sedan that is popular for its style and engine performance. The 2019 RLX can come as either the standard sedan or as the Sedan Sport Hybrid. The base sedan has a starting MSRP of $55,000, while the hybrid option starts at about $62,000.

When you purchase the RLX, it comes standard with plenty of tech and luxury features. This includes a standard navigation system, rearview camera, an impressive 14-speaker audio system with HD radio, and smartphone integration. Controlling all these features is a two-screen system with a seven-inch touchscreen. Drivers will also enjoy the AcuraWatch safety package, which provides you with additional safety and control.

One of the most popular Acura vehicles each year is the MDX, which is a luxury midsize SUV. The 2019 model year has a variety of features that will make it popular with drivers. Like other Acura vehicles, the MDX only has one trim. Despite the lack of trim options, buyers have a wide selection of extras to consider, including whether to upgrade to all-wheel-drive, pick a higher technology package, or more entertainment features. The base model of the MDX starts at just over $44,000. However, with all the upgrades, it can cost more than $60,000.

There are a variety of safety, tech, and entertainment features that come standard with the MDX. This includes two display screens, including a seven-inch touchscreen display, six USB ports, and eight-speaker audio system, and Apple CarPlay and Android Auto. Drivers will also enjoy the standard AcuraWatch safety package that includes a rearview camera and a variety of other safety features.

Another Acura SUV option for drivers is the Acura RDX, which is a smaller luxury SUV. The SUV received a major overhaul for the 2019 model year and now includes a variety of new features and functions. The RDX has a starting price of around $37,400 with the one standard trim level. However, buyers can also purchase several tech, entertainment, and safety upgrades that could drive the MSRP up to $48,000 or more.

The 2019 RDX comes with one standard engine option, which is a turbocharged four-cylinder engine. This engine produces an impressive 272 horsepower and is coupled with a 10-speed automatic transmission. This provides drivers with plenty of speed and control. Along with this engine performance, the RDX gets an acceptable fuel efficiency of 26 mpg on a blended basis.

The 2019 RDX has a variety of new features that were not included in the prior model year. This includes a very impressive 10-inch touchscreen display, a moonroof, Bluetooth, a nine-speaker audio system, and HD Radio. Some of the standard safety features include the AcuraWatch suit, which includes cruise control, forward collision warning, blind spot monitoring, and a rearview camera.

The Acura NSX is a luxury sports car that provides drivers with plenty of performance and style. The car is best known for its twin-turbocharged V6 and three electronic motors, which allows it to produce over 570 horsepower and still provide around 20 mpg in fuel efficiency on a blended basis. This engine performance is very similar to other top supercars and sports cars on the market today.

The NSX starts at $157,500 but can cost more based on additional features that are selected. Some of the base features include the seven-inch touchscreen, two USB ports, an ELS Studio premium audio system with HD Radio, and Bluetooth. There are also a few safety features including a multi-angle rearview camera and emergency brake assist. 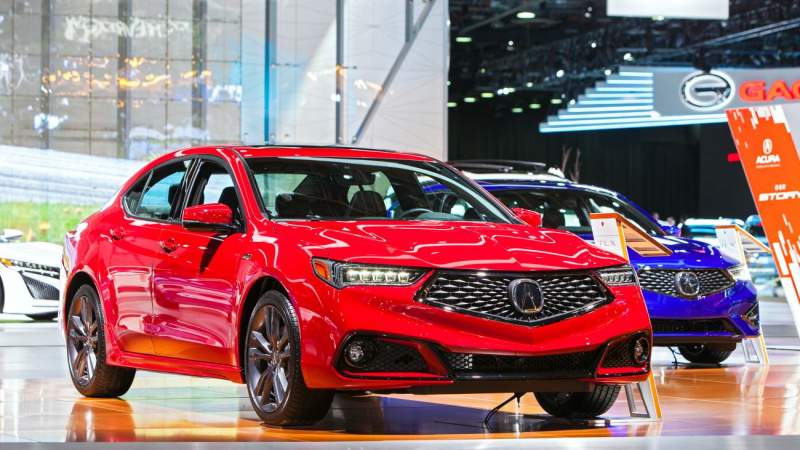