Sneak Peek at the 2020 Toyota Corolla

For years, the Toyota Corolla has remained a fixture among the best-selling cars in America. While the Corolla’s bulletproof reliability and everyday practicality have helped it to remain a highly recommended compact sedan, performance had become an afterthought. Expect the all-new 2020 Toyota Corolla to deliver a far improved driving experience. A striking exterior design and an upgraded interior make the redesigned Corolla even more appealing. According to sources, prices will start at a reasonable $19,500.

Let’s take a sneak peek at the next-generation Toyota Corolla.

Toyota’s durable 1.8-liter, four-cylinder engine will remain the base power source. For 2020, it’s been tweaked to make just a bit more power. Toyota rates the revised engine to develop 139 horsepower. An automatic CVT will be paired with the engine. Despite the mild boost of power, drivers are unlikely to notice a big jump in performance.

For good reason, many Toyota fans will be interested in the new 2.0-liter. Developers tuned it to develop 169 horsepower and 151 pound-feet of torque. The additional power definitely makes the new Corolla a more responsive performer on the street. There’s no denying its quicker acceleration. It has an estimated zero to 60 time of 7.3 seconds, which is far quicker than the outgoing model. When merging onto a fast-moving interstate and making passing maneuvers, you’ll especially appreciate the more potent engine. An available six-speed manual transmission further aids the Corolla Sport’s ability to please driving enthusiasts. Rev-matching technology helps you to shift gears with precision.

Drivers looking to maximize their fuel savings will be interested in the newly available hybrid engine. It’s rated to produce a total of 121 horsepower. Although the hybrid-powered Corolla may not seem like a powerhouse on paper, ample low-torque enables it to deliver an enjoyable real-world performance.

What really makes the 2020 Toyota Corolla special is its more polished road manners. Automotive journalists praise the Corolla for its solid handling, which can be attributed to a new multi-link suspension. Toyota also designed the steering system to provide more road feedback. No longer does the Corolla feel clumsy around corners. A smoother ride also helps make the new model a comfortable daily driver.

Like so many of today’s other new cars, the 2020 Toyota Corolla is focused on delivering improved fuel economy. Models equipped with the base engine have the ability to return an estimated 30 mpg in town and 38 mpg on the highway.

Amazingly, Toyota’s larger 2.0-liter engine actually rewards you with additional fuel savings. Anticipate getting up to 40 mpg with the automatic CVT. Manual-equipped versions of the Sport trim will be a bit less efficient. For the ultimate fuel savings, go for the new Corolla Hybrid. It will reward you with a combined 52 mpg.

The previous-generation Toyota Corolla was already one of the safest cars in the segment. You can expect the new 2020 Toyota Corolla to remain among the class leaders in impact protection.

A plethora of advanced driver-assist technologies are included in the Corolla’s standard Toyota Safety Sense 2.0 package. This year, Toyota has added Road Sign Assist to the package. Aside from helping you to avoid getting costly speeding tickets, this feature also makes you more aware of upcoming highway exits. You’ll now benefit from Lane Tracing Assist as well, which can actually keep the Corolla centered in its lane. Other notable safety tech includes automatic emergency braking with pedestrian detection, dynamic radar cruise control, and automatic high beams. Available as an option, blind-spot monitoring seeks to make highway commuting more secure.

Toyota further refined the 2020 Corolla’s interior. It’s clearly loaded with more technology. Hands-free Bluetooth, a 7.0-inch touchscreen, and Siri Eyes Free all come standard. Even more upgrades are found on the higher trim levels. Because the display is now mounted atop the dash, drivers won’t need to take their eyes off the road. You will definitely appreciate the upgraded 8.0-inch touchscreen, which includes built-in apps for navigation and remote vehicle access. For the first time, a 4G Wi-Fi hot spot will be offered in the Corolla. This is great news for the drivers who spend a lot of time on the road. Meanwhile, music fans are bound to fall in love with the available 800-watt JBL audio system. A powered subwoofer ensures especially deep bass.

How It Stacks Up to the Competition

When shopping for a new compact car, you may also be considering the recently refreshed Hyundai Elantra. Unfortunately, only the 2020 Toyota Corolla comes standard with an advanced safety package. Greater rear-seat legroom gives the Corolla another edge. Passengers riding in the Corolla will have just a bit more room to spread out.

Possibly the Best-Looking Corolla Ever

Over the years, the Corolla was often criticized for its rather cheap-looking interior. Fortunately, Toyota has made big improvements to its top-selling compact sedan. It now has a more refined feel on the inside. Families will especially appreciate the Corolla’s redesigned seats, which provide far better support. You also can’t forget about the updated Entune infotainment system. It’s faster, simple to use, and provides easier smartphone integration.

More Engaging to Drive Than Before

In the past, very few people bought a Toyota Corolla for its fun factor. It was simply a dependable, fuel-efficient car. Although the new Corolla is still far from a sports car, it’s certainly more engaging to drive. You’ll enjoy the redesigned Corolla’s balanced handling and smooth ride. Upgrading to the new 2.0-liter engine is definitely well worth the extra money. Look forward to experiencing stronger acceleration and enhanced fuel efficiency. 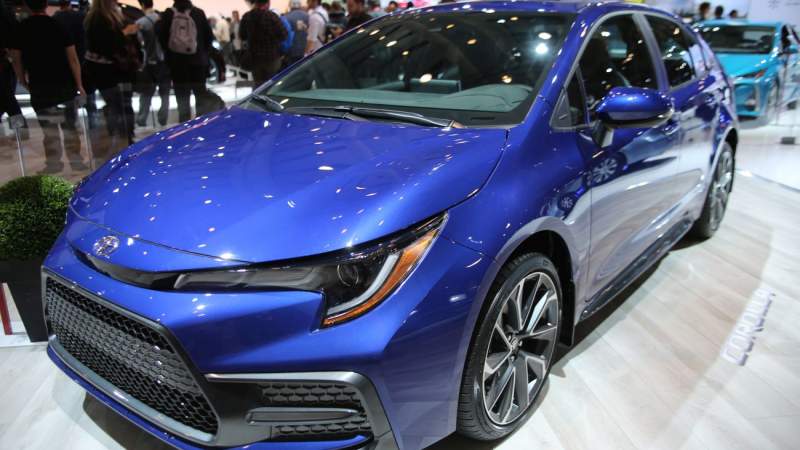