The NASA Perseverance rover has safely landed on Mars. After a long 292.5-million-mile journey from Earth, it’s already sent back its first images from the Red Planet. If you’re wondering why we, a site obviously all about vehicles, are posting about a NASA rover on Mars, well, we just think it’s really frickin’ cool. Or, if you insist, this is just another news article about a different kind of vehicle. The vehicle in question just happens to be a technology packed rover exploring a distant planet.

Percy, as the rover is called at NASA mission control, sent back its first images of the landing site after touchdown. They showed the rover’s shadow on the surface of its landing spot at Mars’ Jezero Crater.

The rover has been on a nearly 300-million-mile journey since it left Earth more than six months ago. Now that it has safely landed, the Perseverance rover is tasked with exploring for the possibility of life on the mysterious planet. Perseverance is programmed to search for signs of ancient life on Mars and record sounds.

The most sophisticated rover NASA has ever built has a packed agenda for the next few years. The rover will explore Jezero Crater, the site of an ancient lake that existed 3.9 billion years ago. Percy will search for microfossils in the rocks and soil. Follow-up missions will return these  samples to Earth by the 2030s.

Along for the ride with Perseverance is an experiment to fly a helicopter (called Ingenuity) on another planet for the first time. Perseverance is NASA’s ninth landing on Mars. It marks the agency’s fifth rover to explore the planet. Most recently, the Curiosity rover landed in August 2012 and is still active. The Opportunity rover landed in 2004, but NASA lost contact with it in 2018.

To land, Percy had to go through the infamous “seven minutes of terror.” The time it takes for radio signals to travel from Earth to Mars is about 11 minutes. That means the seven minutes it takes for the spacecraft to land on Mars occurs without any help or intervention from NASA teams on Earth. This rover is the heaviest one that NASA has ever attempted to land, weighing in at over one metric ton. The spacecraft hit the top of the Martian atmosphere moving at 12,000 mph. It then had to slow down to 1.7 mph seven minutes later when it softly landed on the surface. Thankfully, it was a success.

The spacecraft’s heat shield endured peak heat of 2,370 degrees Fahrenheit while entering Mars’ atmosphere. Perseverance targeted a 28-mile-wide ancient lake bed and river delta. According to NASA, it was the most challenging landing site yet for any Mars landing. Rather than being flat and smooth, the small landing site is littered with sand dunes, steep cliffs, boulders, and small craters. The spacecraft has two upgrades — called the Range Trigger and the Terrain-Relative Navigation — to navigate this difficult and hazardous site.

Amid the rugged terrain, the rover managed to avoid all of the hazards, according to NASA. The NASA Mars Reconnaissance Orbiter relayed data from the rover throughout landing.

Now that the rover has successfully landed, Perseverance’s two-year mission begins. Here on Earth, we can follow its journey using an interactive map found on NASA’s website. Any raw images sent back by the rover will also be available to the public on NASA’s website. The mission team is expecting the first new images on February 26. 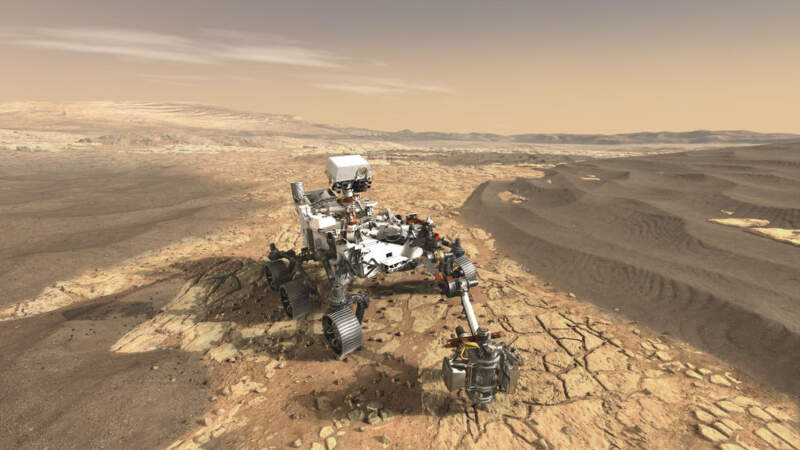