Inside The 2021 Ford Bronco: A Legend Reborn

The Ford Bronco is a truly legendary vehicle. First produced back in 1965, the Bronco is credited as being one of the first ever SUVs. It has retained a special place in the hearts and minds of gearheads the world over. Sadly, Ford discontinued the Bronco back in 1996 after five consecutive generations and 30 years of continuous production. Of course, the Bronco is also infamous for that O.J. Simpson moment, broadcast live to 95 million TV viewers.

Now, Ford is bringing back the much-admired Bronco. The Bronco returns to the Ford product line-up as a 2021 model after a 25-year hiatus. The sixth-generation Bronco will be sold as a mid-size SUV for the very first time. Understandably, the return of the Bronco has generated a lot of excitement. Here’s everything we know so far about the 2021 Ford Bronco.

Based on details released by Ford (and some timely leaks), the reincarnated Bronco will be a boxy shape. The retro styling is designed to appeal to those who have an affinity for this classic vehicle. It will be available with either two or four removable doors. A removable roof positions it to compete with similar rugged vehicles like the Jeep Wrangler.

The overall design is pretty cool. It plays nicely on the Bronco’s heritage. However, the new Bronco is a bit smaller in overall size than previous incarnations. It’s actually classified as a mid-size SUV now rather than full-size SUV. Regardless of its size, the exterior style of the new Bronco should appeal to fans of Ford trucks. Or anyone else who pines for their old classic Bronco.

There’s been a lot of speculation about what will be under the hood of the 2021 Bronco. All that Ford has said to date is that the Bronco will share a platform with the next-generation Ford Ranger pick-up truck. We therefore can surmise that the Bronco will likely have similar engine options as the Ranger. That is, a turbocharged 2.3-liter four-cylinder as well as a twin-turbo 2.7-liter V6 that’s available on the Ford F-150.

Additionally, the Bronco engine could be paired with a seven-speed manual transmission with a “crawler gear” that can be used when driving off-road. Ford has confirmed that the Bronco will eventually offer a hybrid powertrain engine, although the exact timing of when that will happen remains to be confirmed. Expect official announcements to happen soon, as Ford was originally expected to debut the new Bronco at the cancelled New York Auto Show.

Pricing for the 2021 Ford Bronco hasn’t been officially unveiled by Ford. They also haven’t given any details on the potential trimlines for the vehicle. However,  we do know that the Bronco will be available with two or four doors, have removable roof panels, and offer multiple powertrains. With this in mind, it’s reasonable to assume that the new Bronco it will come in multiple trimlines and a wide range of prices.

That sounds similar to the Jeep Wrangler lineup, which is the main competition for the Bronco. Many analysts have speculated that Ford is likely to try and capitalize on the hype surrounding the re-imagined Bronco by announcing a starting price that is a little higher than the Jeep’s, which starts right around $30,000.

The interior of the Bronco is the biggest unknown at this point. Aside from the removable doors and roof, not much else has been shared regarding the Bronco’s interior. Ford’s public relations department has hinted that the Bronco’s interior will have extra-durable parts, including waterproof components for sensitive electronics such as those that power the seat adjustments. Photos leaked online have shown a large central touchscreen as well as some toggle switches for auxiliary equipment above the rear-view mirror. There appears to be a rotary knob for selecting different drive modes behind the gear selector. However, exactly how comfortable the Bronco will be or how much storage capacity it will have remain a mystery for now.

It’s a safe bet that Ford’s in-dash Sync4 software will almost certainly power the large touchscreen that is embedded in the middle of the Bronco’s dashboard. This set-up would allow for over-the-air update, can connect to the cloud, and sync your smartphone wirelessly and seamlessly. The infotainment system will also surely support a host of common features. We expect features like Apple CarPlay and Android Auto compatibility and a subscription-based WiFi hotspot. There likely will be optional upgrades such as built-in navigation and a more powerful audio system that Ford offers on other models.

In terms of safety features, Ford hasn’t revealed many details. We don’t know the exact driver-assistance technologies that might come standard or optional on the Bronco. However, it’s safe to assume that features such as adaptive cruise control, automated emergency braking, lane-keeping assist, and more will be available. Ford does have a reputation for providing ample standard safety features on its pick-up truck and SUV line-ups. So you can take comfort knowing the new Bronco will be safe and reliable.

No fuel economy information is available yet and won’t be until the 2021 Ford Bronco is officially unveiled later this year. For the sake of guessing, the FWD 2020 Ford Ranger averages about 23 miles per gallon combined. The AWD Ranger gets 22 MPG combined. If the new Bronco does have the same (or similar) engine, you can probably expect similar numbers.

If the Bronco adopts the V6 engine option that Ford uses in the F150, those numbers could drop to 20 MPG or below.

Much about the 2021 Ford Bronco remains speculative at this point. What we do know about the resurrected classic is that it’s sure to impress with its retro style combined with modern technology and safety features. Whether all the hype is justified won’t be truly known until Ford officially unveils the new Bronco. It remains to be seen exactly when that will be, given the unprecedented state of the world right now. However, based on what’s been leaked online and the statements made, to date, by Ford themselves, there’s reason to be excited about the return of the legendary Bronco. 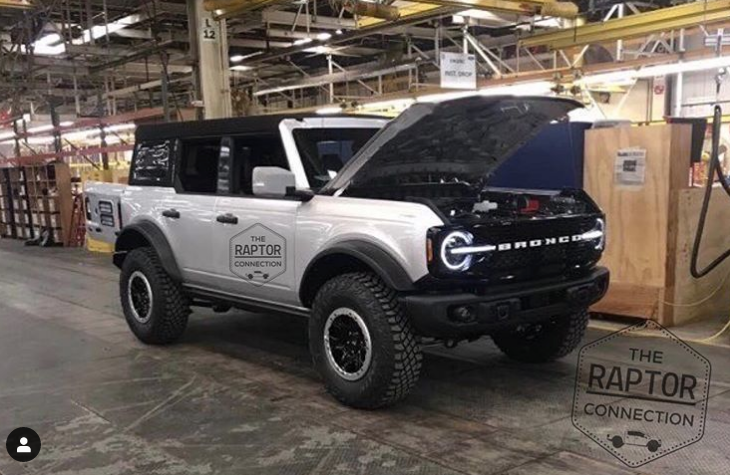