Inside The 2020 Toyota GR Supra: A Legend Reborn

The Toyota Supra is back from the dead. For the year 2020, Toyota has revived one of its most legendary cars – the Supra. Originally produced from 1978 to 2002, the Supra has been on an extended hiatus for close to two decades. Now, after nearly 10 years of teasers and concept models, the production GR Supra made its debut at the Detroit Auto Show this past January. Now it’s hitting showrooms all over the world.

Many critics are already putting the revived Supra on their “best of” lists as 2019 draws to a close. That’s because the 2020 GR Supra has a turbocharged six-cylinder engine that knocks out 335 horsepower. The overall styling and performance of this car have been similarly praised, making the new Supra a worthy addition to any garage.

The brand new Supra is stylish as hell. The car’s exterior has impressive details like a double-bubble roof and a pair of big-bore, chromed exhaust pipes that stand out. Additionally, the Supra has an overhanging nose reminiscent of muscle cars from the 70s. The new version also boasts direct air intake for the radiator and extended slit-like head lights that are visually striking.

Make no mistake, the 2020 Supra looks like a retro cool sports car. Oversized tires and long, cool lines only add to the car’s slick design. Standard paint colors include red, white, blue, silver, and black. For an additional $400 though, you can upgrade the Supra’s exterior paint to “Nitro Yellow.” A bright yellow Supra is sure to turn heads everywhere it goes.

The 2020 Toyota GR Supra’s engine has been hailed as smooth and powerful. The 3.0-liter inline six-cylinder engine is paired to an automatic transmission and has been called a pleasure to drive on both roads and racetracks. If there is one criticism of the new Supra’s performance, it’s the lack of a manual transmission option. That’s a real shame for such a beloved car.

Regardless of trimline, all Supra models come with an eight-speed automatic transmission that is paired to rear-wheel drive. Those elements shouldn’t be too troublesome for most people though, when you consider that the Supra can hit 60 mph in 3.8 seconds. And it rockets to 100 mph in just 9.5 seconds. That puts the Supra in the same category as a Corvette and the Porsche Cayman GTS.

The Supra’s suspension is also quite forgiving and the steering has been praised for being responsive and accurate. As for the manual transmission, there are rumors that Toyota will provide the Supra with a stick shift later in its production run. Here’s hoping.

The 2020 GR Supra comes in three trimlines, with three distinct prices. There’s the base 3.0 model, which starts right around $50,000. The mid-level trim is called the 3.0 Premium, costing at least $54,920. The top trimline is the Launch Edition, which will set you back $56,180. Most reviewers seem to agree that the mid-range “3.0 Premium” trim offers the most value for money.

The mid-range Supra comes with several impressive features that are unavailable in the base model. These include a larger 8.8-inch infotainment touchscreen, Apple CarPlay capability, a 12-speaker JBL stereo system, head-up display, and heated leather seats.

If there is any area where the 2020 GR Supra falls short, it might be the interior. Those who have given the Supra a test drive complain that the cockpit is a bit tight. Although the double-bubble roof provides additional headroom, taller drivers are likely to feel a bit cramped. Cargo space has also been described as a bit light, noting that it would be difficult to fit even one set of golf clubs in the hatchback area. Then again, if you wanted ample storage for road trips, you’d be looking at an SUV, not the revamped Supra.

Other criticisms of the Supra’s interior include obstructed outward views. It should be noted that a lot of the Supra’s interior is shared with the BMW Z4. Both sports cars are manufactured in Austria. So many of the complaints about the Z4’s tiny interior apply to the new Supra as well. The good news is that most people will buy the Supra for its performance, not its cargo space.

As you would expect, the infotainment system and technology in the 2020 GR Supra are all very impressive. The standard touchscreen system that comes in all trimlines features a 6.5-inch display. A larger 8.8-inch display with navigation and Apple CarPlay is an available upgrade – for an additional cost, of course.

A 12-speaker JBL audio system is optional on the base 3.0 Supra and standard on the other versions. The latest Supra also comes outfitted with a number of driver-assistance safety features, which come standard across all editions. These include automated emergency braking with pedestrian detection, lane-departure warning, and automatic high-beams. Additional safety features, such as adaptive cruise control and blind-spot monitoring, can be added via a “driver assistance package” for an extra $1,195.

The 2020 GR Supra is surprisingly fuel efficient for a performance vehicle. It’s more fuel efficient than competing sports cars like the Chevrolet Corvette, Porsche Cayman GTS, or the BMW M2. The fuel economy ratings for the Supra are 31 miles per gallon for highway driving, 24 mpg of city driving, and 26 mph of combined highway and city driving. A fuel-efficient sports car. Who knew?

Anyone looking for a sports car that is stylish and has a great engine could do a lot worse than the new 2020 Toyota GR Supra. Few cars on the market today are more powerful or look as good. The fact that the Supra is also good on gas and comes loaded with standard safety features should make this car even more attractive to potential buyers.

The lack of interior space or cargo room really shouldn’t bother you. After all, you’re shopping for a sports car, not a pick-up truck. Small, quick, and nimble is the name of the game. If your main concern while car shopping are things like “will the kid’s car seats fit?” or “can I cram my hockey bad in the trunk?”, perhaps you should be looking at minivans instead of the excellent 2020 GR Supra. 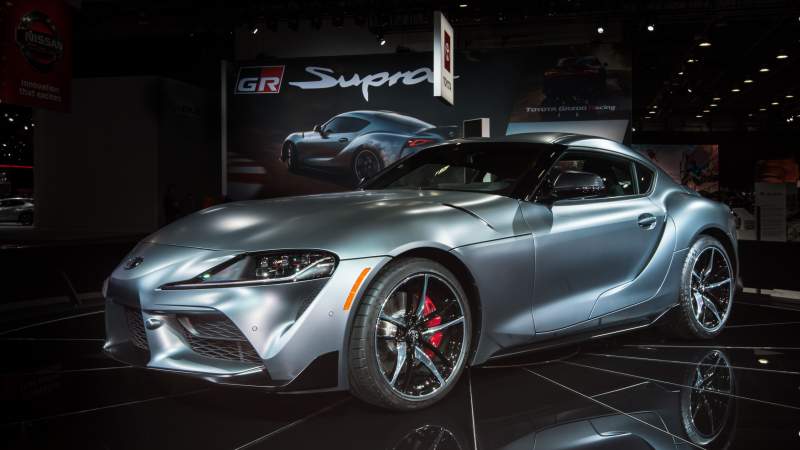