When it comes to SUVs, the 2020 Mercedes-Benz GLS is the king of the mountain. Previous model years of the GLS were critical darlings. Now, the entirely redesigned SUV is getting even more hype for being both spacious and luxurious. The only question is which model of the GLS you should choose – the six-cylinder 450 or the eight-cylinder 580. Each is impressive in its own right. Both are also available with optional electric-assist hybrid powertrains. Here is what you need to know about the 2020 Mercedes-Benz GLS.

The worst thing about the newly redesigned GLS is its exterior styling. However, that’s not a bad thing. The exterior of the GLS isn’t flashy, but remains stylish and commanding. Engineers at Mercedes have favored a more practical and functional exterior instead of a sleek style. While some reviewers have described the exterior as “boxy” and “Volvo-like,” the reality is that the new GLS is a functional and spacious full-size SUV.

Mercedes has put all the bells and whistles on the inside the vehicle, instead of rounding the headlights or enlarging the wheel wells. While some may quibble with the outside appearance of the GLS, we don’t think it’s a serious detraction. The rest of the SUVs features more than compensate for a somewhat pedestrian exterior.

The GLS 450’s turbocharged 3.0 liter inline-six engine has been described as “silky smooth.” It produces 362 horsepower when combined with its electric motor. As for the upgraded 580, it’s even more powerful. It cranks out 483 horsepower from its twin-turbocharged 4.0 liter V8 engine. Both are paired to an automatic nine speed transmission. Most reviews seem to agree that you can’t go wrong with either engine choice.

If you plan to drive the GLS off-road or take it outside the city, you would be best to get the more powerful 580. It’s just worth it. The GLS 450 can reach 60 miles per hour in 5.9 seconds, while the 580 can hit that mark in 5.2 seconds. Both demonstrate exceptional acceleration and power. You really can’t go wrong either one.

In terms of the handling and overall driving experience, the GLS is easy and smooth. It can handle bumpy, winding roads and comfortably absorbs shocks and bumps. This is owing to the fact that each GLS model comes standard with an air suspension system. Also, it offers a brand-new system called “E-Active Body Control.” Mercedes says it utilizes a forward-facing camera to scan for bumps ahead and adjusts the suspension accordingly. The end result is that drivers will swear they’re driving on even pavement, even when they’re on a dirt road. The steering is sensitive and precise. Its brakes have been called tight and responsive. In short, the GLS is a dream to drive.

They aren’t cheap, but it’s comparable to other luxury SUVs in the same class. Add in a few options in terms of engine upgrades and additional safety features and the price can be pushed well up over six figures. Keep in mind that the standard engines in the GLS are more than sufficient. Both the 450 and 580 models come well-equipped in standard mode.

Part of the redesign of the GLS involves a much more modern interior dashboard and cockpit. The 450 and 580 models are both more impressive inside than the 2019 model. It’s worth mentioning the two large 12.3-inch digital displays that fill most of the space on the dashboard. One screen is exclusively for the driver, while the other serves as the infotainment center. It runs all-new MBUX software that features a virtual assistant.

The cabin can also be configured to seat six or seven people, with optional second-row captain’s chairs available. Passenger space has been called “generous” in the first and second rows. The much-maligned third row, while not quite as roomy, can accommodate adults with less discomfort than is typically found in a full-size SUV. There is certainly more leg room than in rival SUVs, according to mose reviewers. There is plenty of storage space for luggage and other cargo, too.

As mentioned, the technology in the 2020 GLS is very impressive. Mercedes’ infotainment can be considered best-in-class. It’s actually won numerous awards. The navigation system really stands out — the augmented reality overlay and turn-by-turn directions in the instrument cluster and head-up display are nothing short of amazing. You might feel like you’re on the bridge of USS Enterprise in the cockpit of this SUV.

Both Apple CarPlay and Android Auto compatibility come standard in the GLS.  All three rows of seating come with USB-C ports. A standard wireless charging pad sits between the front seat cupholders. The driver assistance features are also impressive. The adaptive cruise control is among the best on the market today. If you need only one reason to buy the Mercedes-Benz GLS, the included technology is probably it.

The GLS isn’t cheap at a starting price of $75,000. However, the cost is obvious when you see the interior. You can really feel the expense in the driving experience. To help protect your investment in either the 450 or 580 GLS, Mercedes provides a four-year, 50,000-mile bumper-to-bumper warranty. That coverage is about average for the luxury SUV class. Not spectacular but not bad either. Sadly, Mercedes does not provide complimentary scheduled maintenance.

In terms of fuel economy, the Environmental Protection Agency has pegged the 2020 GLS450 at 21 miles per gallon combined city and highway driving. That’s an impressive rating for a big, full-size SUV. The more powerful GLS580 version naturally performs a bit worse, getting a combined MPG of 18.

The 2020 Mercedes-Benz GLS improves on an already spectacular SUV. In terms of full-size luxury SUVs that offer comfort, technology, and roominess, you can’t do much better. Both the 450 and 580 models are extremely impressive. While the 580 comes with a more powerful engine, the 450 is more than sufficient when it comes to performance, safety, and overall enjoyment. If you can afford the price tag, we highly recommend the newly redesigned Mercedes-Benz GLS-Class. It’s one purchase you won’t regret. 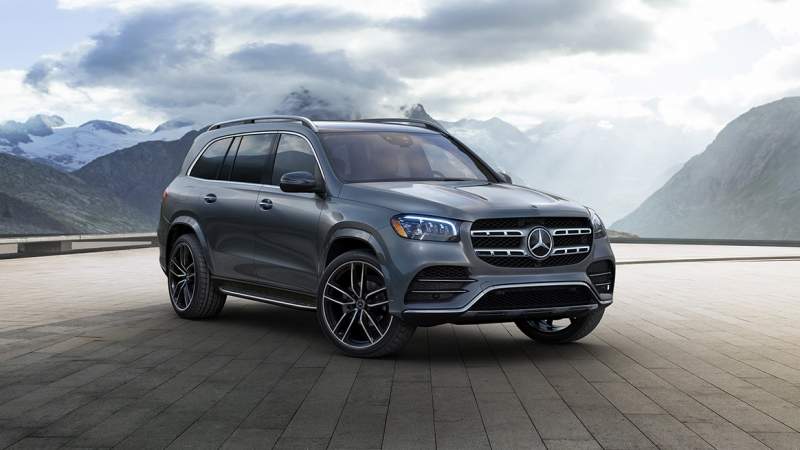