Inside the 2020 Kia Optima: Who Needs an Accord or Camry?

The affordable mid-size sedan segment is mostly defined by two cars: The Toyota Camry and the Honda Accord. Of course, there are a lot of cars that do things just as good (or better) than those two. In fact, there’s one car that’s almost an equal to the two segment standard-bearers. We’re talking, of course, about the Kia Optima.

The Optima is not longer just the default choice for budget buyers. It’s evolved into a serious threat to the Camry and Accord thanks to its attractive styling, pricing, and features. The Optima might not be the gold standard for affordable mid-size sedans just yet. However, it’s certainly a compelling option that shouldn’t be ignored.

The Optima lineup gained a new trim level for 2020.The “S” model now slots between the existing “LX” and “EX” trims. It’s a nice option if you’re on a budget. We’ll have more information on the trims and prices in a minute.

Exterior Styling: Wait, Is That Really a Kia?

The Mazda 6 is the best-looking affordable mid-size sedan on the market, full stop. However, the second-best looking model just might be the Optima. Its “Tiger Shark grille” is bold, giving the sedan just a hint of edge. Meanwhile, the sloping roofline suggests the designers who penned the car gave form just as much consideration as function. However, if you’re hungering for a sporty sedan, you will want to look elsewhere. The Optima trends more toward suave than sport.

What’s Under the Hood: So. Many. Engines.

The 2020 Optima is available with a whopping five different powertrains. There are three gas engines to pick from, along with two hybrid options. The traditional options start with a naturally aspirated 2.4-liter four-cylinder engine found in the base model. This powerplant makes 185 horsepower and 178 lb-ft of torque and sends power to the front wheels via a six-speed automatic transmission.

The Optima is tuned more for comfort than performance. CarandDriver says it sits a few rungs down the performance ladder from the Accord and Camry. Reviewers also agree that despite being the more advanced transmission, the seven-speed dual-clutch doesn’t shift nearly as smoothly as the six-speed automatic.

That being said, the consensus is that the Optima handles itself competently on winding roads. You’ll probably still find the car’s limit quicker, though, than if you were driving a more performance-focused sedan like the Mazda 6. The fastest Optima features the turbocharged 2.0-liter engine and six-speed automatic transmission. It makes the sprint from 0-to-60 mph in 6.8 seconds.

The most fuel-efficient Optima is obviously the hybrid. It achieves an EPA estimated 40/45/42 mpg (city, highway, combined). The plug-in hybrid can achieve an 41 mpg, but also has an all-electric range of 28 miles. Of the three gas-powered variants, the turbocharged 1.6-liter engine mated to the seven-speed dual-clutch is the least thirsty, averaging an estimated 27/37/31 mpg.

CarandDriver noted in their review that the plug-in Optima hybrid didn’t hit its EPA estimated fuel economy numbers. Their testing saw the Optima fall short by 2 mpg. On the other hand, the 2.0-liter turbo actually exceeded its stated fuel economy figures by 4 mpg.

What’s Inside: A Spacious Interior and Safety Come Standard

The Optima’s rakish roofline would suggest that taller passengers sitting in the back might have a tough time with headroom. However, that’s not the case according to reviewers from U.S. News. While the Optima can’t fit half a basketball team in its second row, its cabin is spacious enough to seat four taller adults comfortably. While the interior design may be a bit pedestrian to some, CarBuzz said that the cabin’s high-touch surfaces feel like they’re made from high-quality materials.

A cloth interior is standard, as is an eight-way power-adjustable driver’s seat with two-way lumbar support. Available luxury features include perforated leather seats, heated and ventilated front seats, heated rear seats, and a panoramic sunroof. Kia doesn’t really do options packages. That means most available luxury features are unlocked when you step up to higher-priced trim levels.

The 2020 Optima isn’t exactly the smartest car around, but it does offer competitive standard features. Kia’s anti-a-la-carte approach to upgraded features means you won’t have to shell out money on expensive options packages to unlock better tech. You will, however, need to strongly consider which trim is the best bang for your buck.

Available safety features includes a 360-degree panoramic parking camera, adaptive cruise control, and automatic headlights/high beams. Kia offers one of the most comprehensive suites of standard safety tech in the mid-size sedan class. That means you don’t have to choose between saving money or being safe when shopping for an Optima.

Pricing and Trim Levels: Who Said Anything About Breaking the Bank?

The cheapest Optima packs plenty of tech and driver’s assistance aids, although it does pack the weakest engine on offer. Performance and fuel economy issues aside, the LX is a smart choice for those looking to get the most out of a base model mid-size sedan.

What makes the Special Edition so special? Well, it takes the S package and adds a panoramic power sunroof, interior LED lighting, leather seat trim, and a heated and leather-wrapped steering wheel. All of this extra luxury rings starts at $26,390.

The available 1.6-liter turbocharged four-cylinder, which is mated to a 7-speed dual-clutch transmission, sits under the hood of the Optima EX. Along with the peppier engine, this trim also comes with dual-zone climate control system, adaptive cruise control, a wireless charging pad, and wood grain accent trim. The Optima EX starts at $27,190.

As its name indicates, this trim level is all about premium features. Said features include a 12-way power-adjustable driver’s seat with four-way lumbar support, an upgraded Harman Kardon sound system, a heated steering wheel, panoramic sunroof, navigation, and ventilated front seats. The EX Premium is the first Optima to cross the $30,000 threshold and starts at $30,190.

The most expensive Optima on offer starts at $32,1900. It’s the only one that packs the lineup’s most-powerful engine, the turbocharged 2.0-liter four-cylinder. In addition to having the biggest engine, the SX Premium is also equipped with sport leather-trimmed seats, red brake calipers, LED fog lights, and LED auto-leveling headlights.

The hybrid and plug-in hybrid Optimas are available in just one trim level, the EX. They start at $29,310 and $36,090, respectively. Aside from the plug-in hybrid Optima, no trim level really breaks the bank. That’s somewhat impressive given that “economy” cars can get expensive quickly, especially mid-size sedans.

If it were our money, we’d be tempted to go all out and select the SX Premium. It’s still a few thousand dollars cheaper than the top-tier Camry XSE and Accord Touring. That said, the EX is also a tempting option given its upgraded engine, adaptive cruise control, wireless charging pad, and dual-zone climate control.

The 2020 Kia Optima is an incredibly complete car. It’s affordable, packs a wealth of standard features and tech, and is still stylish. It’s not the most powerful or engaging mid-size sedan out there and could do a bit better at the pump.

Still, it checks all the right boxes. It’s a real competitive alternative to the Camry and Accord. Really, the only reason to not consider the 2020 Optima is the fact that the completely redesigned 2021 version is right around the corner. 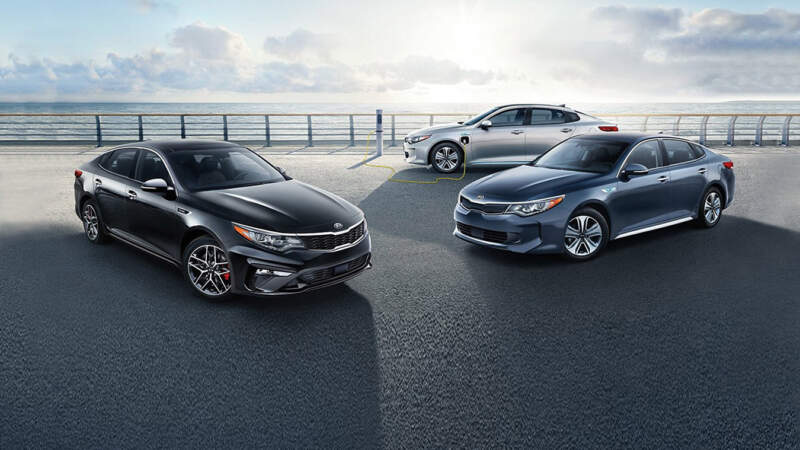