Ford has unveiled its all new 2020 Mustang Shelby GT500, and the car has drawn both praise from fans who love the design and criticism from analysts who balk at the steep price. To be sure, at a base price of nearly $75,000, the Mustang Shelby GT500 is considerably more expensive than the rival Chevrolet Camaro ZL1 (which has a starting price of $64,695), and even more than the Dodge Challenger Hellcat Redeye (starting at $73,440). Still, fans claim that the gorgeous exterior design and loaded interior features justify the cost. Here’s what you need to know about Ford’s latest version of the legendary Mustang.

The Most Expensive Mustang Ever Produced

It’s hard to talk about the new Mustang Shelby GT500 and not keep circling back to its price. That’s because the GT500 costs more than $90,000 fully loaded and with a “Carbon Fiber Track” package thrown in, making it the most expensive factory produced street-legal Mustang ever made by the Ford Motor Company.

No Mustang has ever cost north of $90,000 straight from the factory floor. The item really driving the price so high is the Carbon Fiber Track package, which costs $18,500 and includes carbon-fiber wheels, Michelin Pilot Sport Cup two track tires, an adjustable carbon-fiber wing, and a rear-seat that is removable.

While not everyone will want (or need) the Carbon Fiber Track package, Ford is selling it as the be all and end all of Mustang performance cars. For Mustang purists, and anyone wanting to race the Shelby GT500, it might be worth the investment.

The Engine is a Monster

Of course, this wouldn’t be a Mustang without a powerful engine, and the Shelby GT500 packs a monster under the hood. Each of the new  GT500s comes equipped with a supercharged 5.2-liter V-8 engine that produces 760 horsepower and 625 pounds per feet of torque.

The engine is controlled by a seven-speed dual-clutch automatic transmission. Ford’s promotional material for this muscle car claims that it can cover a quarter mile in less than 11 seconds, and that the top speed is 180 mph. The good news is that you get the same engine in the Mustang Shelby GT500 whether you purchase the base model or the most tricked out version of the car.

The 2020 Shelby GT500 has an optional technology package that is quite impressive. It comes with an upgraded audio system and state-of-the-art infotainment system that can be used with Android Auto or Apple CarPlay. However, the technology package also comes with several impressive safety features designed to protect Mustang drivers and their occupants. These include blind-spot warning, rain-sensing wipers, and even puddle lamps that project a Cobra logo.

While impressive, the technology package is not cheap, tacking another $3,000 onto the final bill. At least you get a lot of features for the money you pay. There’s also an optional handling package for $1,500 that adds adjustable strut top mounts, removable splitter end plates, and a Gurney flap to the car. If you must choose between the two, we recommend the tech package.

It Comes in 11 Different Colors

As for the exterior of the new GT500, it’s flat out awesome and more than meets the expectations of fans. This muscle car also comes in a choice of 11 different colors, making customization and personalization fun and easy. Available colors include lime green, red, black, blue, yellow, and metallic grey to name only a few. Further customization can be accomplished with side stripes and different colored roofs.

Inside the Shelby GT500, the standard seats are leather with micro-suede trim and are power adjustable, while the optional manual adjustable Recaro seats (standard on the Carbon Fiber Track package) are trimmed in leather. Another standalone option is a carbon fiber instrument panel, which is included in the track package for $18,500.

If there’s one bummer with the 2020 Mustang Shelby GT500 it’s that the price includes a $2,600 gas-guzzler tax. That tax helps push the base model price of the GT500 $12,460 higher than what consumers paid for the previous model – the Mustang Shelby GT350.

As mentioned, the Shelby GT500 is the most expensive Mustang ever produced. Add in the technology and Carbon Fiber Track packages and this Mustang easily tops $95,000. Throw in a few more bells and whistles and this car could cost six figures. The GT500’s closest competitor, the Chevrolet Camaro ZL1, starts at $64,695 but offers only 650 horsepower from its supercharged V-8 engine. Probably more comparable is the Dodge Challenger SRT Hellcat Redeye, which produces 797 horsepower and has a starting price of $73,440.

The 2020 Mustang Shelby GT500 more than meets the expectations that Ford has set for its premier muscle car. It combines power, style, and performance in one hot package that will turn heads everywhere the car goes. The technology and safety features are just icing on the cake.

However, owning a car this nice will cost you a fair chunk of change. The price range of $75,000, upwards to $100,000 puts this Mustang out of reach for most people. But take heart, in a few years you might be able to get one on resale for a little less money – fingers crossed. 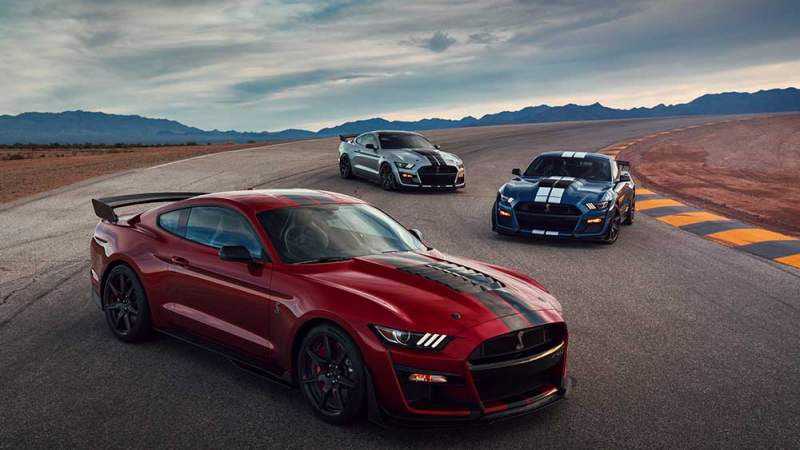