With around 4.5 million units sold in the 40-plus years since it was first introduced, the BMW 3 Series is the best-selling luxury vehicle in the world. It’s among the most universally known and instantly recognizable models on the market. However, it’s also a model that’s been on a downward trend in recent years. The last 3 Series generation, introduced in 2011, ushered in several changes that some felt robbed the line of its unique spirit.

It’s safe to say that the Bavarian manufacturer was listening. With an all-new generation scheduled to roll off the line beginning in 2019, the seventh iteration of the series has been hailed as a return to form. BMW has clearly put a lot of effort into trying to rekindle the magic that so often made the 3 Series a joy to drive and to own, but is it worth the starting MSRP of $40,250?

For all its luxurious comfort and cutting-edge technology, a BMW 3 Series isn’t really a 3 Series without outstanding performance. Fortunately, the 2019 model line nails it. BMW has pared down its offerings in order to sharpen its focus. The 2019 BMW 330i is motivated by a 2.0-liter turbocharged four-cylinder engine that’s been reworked to boost output to 255 horsepower and 295 pound-feet of torque. Rear-wheel drive is standard, but you can also opt for BMW’s xDrive all-wheel drive. The entry-level BMW 320i, which featured a toned-down version of the same engine, will be cut from the American market.

If you’re a serious performance enthusiast, of course, your attention is more likely to be drawn to the 330i’s bigger brother. Now available exclusively as part of the automaker’s “M Performance” line, the BMW M340i features a 3.0-liter inline-six with a twin-scroll turbocharger that puts out a delightfully satisfying 382 horsepower and 369 pound-feet of torque. As with the 330i, the M340i is available in rear-wheel and xDrive all-wheel configurations. Manual transmissions have been left on the cutting room floor, so both models employ a slick-shifting eight-speed automatic. Both vehicles have also undergone extensive suspension tuning and recalibration that, according to BMW engineers, is aimed at “getting everything to work together more beautifully.”

A performance-oriented sedan like the 3 Series is never going to boast hybrid-like efficiency, but BMW has nonetheless devoted attention to improving fuel economy. One key feature is the carmaker’s “intelligent” transmission. The brainy gearbox uses GPS and other data to read the road ahead, factoring in everything from topography to road conditions to the radius of an upcoming curve in the road to automatically select the gear that optimizes power and efficiency. The car’s Eco Pro mode, which takes these ideas further and even strategically decouples the engine and transmission for maximally efficient coasting, can reportedly improve efficiency by as much as 20 percent.

With so many fuel-saving features, the 3 Series turns in very respectable efficiency across its lineup. The base 330i sedan checks in at 26 mpg city and 36 mpg highway. With the xDrive drivetrain, those numbers dip slightly to 25 mpg and 34 mpg, respectively. The 330i xDrive sports wagon registers numbers of 23 and 33 mpg. Opting for the M340i and its turbocharged straight-six will get you around 20 mpg during city driving and 29 mpg on the highway.

As you might expect, the 2019 BMW 3 Series is loaded with advanced technologies. Base models feature a 5.7-inch digital gauge cluster and an 8.8-inch infotainment display but upgrading to BMW’s Live Cockpit Professional package offers a huge 12.3-inch cluster display and a 10.3-inch infotainment screen. There’s also a heads-up display that puts a great variety of information right in front of you by projecting it onto the windshield. Perhaps most exciting is the innovative BMW Intelligent Personal Assistant, which offers voice controls and provides all sorts of useful information.

The BMW 3 Series has long been the standard-bearer in the luxury sports sedan segment. It’s good to be the king, but it also means that competitors are always coming for your crown. Automakers from around the globe have jumped into the market with strong offerings. Still, as has been the case for over two decades now, BMW’s fiercest competition comes from its own backyard.

If unmatched luxury is your primary concern, the 2019 Mercedes-Benz C-Class presents a compelling case. The current C-Class generation is in its fourth year, but it features a plush interior and a refined aesthetic. However, it falls short of the sheer breadth and depth of available tech the 3 Series can offer. Some of the C-Class models can also be rather costly, and arguably none of them offer quite the same experience behind the wheel as the BMW sedan.

Audi’s decision to stick with a more conservative design language in recent years is clearly reflected in its A4 sedan. It’s certainly attractive, but a side-by-side comparison highlights the more aggressive lines and stylish flair of the BMW 3 Series. Inside the cabin, the 2019 Audi A4 is arguably a bit more comfortable. Unlike BMW, Audi also includes standard smartphone integration. However, the A4 simply can’t match the 3 Series’ sporty performance. You’ll catch a bit of a break on its starting price compared to BMW’s flagship sedan, but the reduced sticker price still comes at a cost.

It’s not quite perfect, but the 2019 BMW 3 Series is undoubtedly a satisfying return to form for the venerable luxury sedan. Stalwart BMW enthusiasts will appreciate a driving experience that’s more befitting the badge than in years past. The new generation also retains enough luxury touches and high-tech features to appeal to newcomers.

A lot has changed in the four decades since the BMW 3 Series first hit the market. One thing that hasn’t changed, however, is the Bimmer’s status as the king of the luxury sedans. There are plenty of great options from which to choose, but if you need a car that’s as comfortable and stylish as it is fun to drive, it’s hard not to put the 2019 BMW 3 Series near the top of the list. 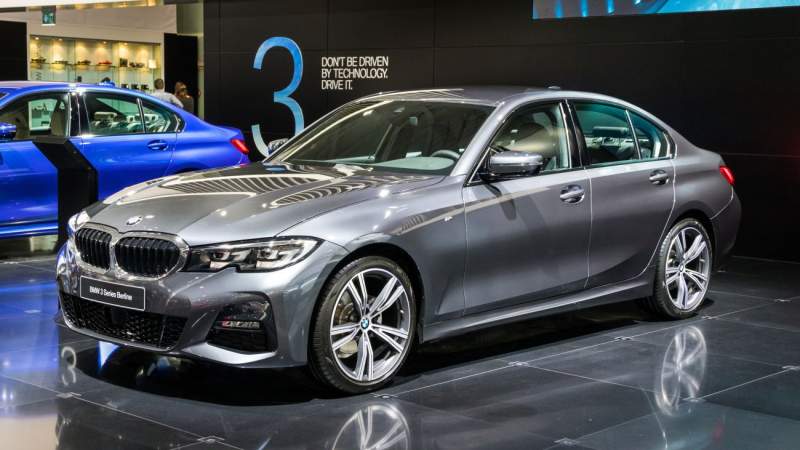