The long wait for the 2021 Porsche 911 GT3 is almost over. The prototype pictures look promising, and the automaker claims that the production-ready GT3 will be styled a bit differently from the outgoing 991.2 model while still carrying on many of the defining features that have made the track-ready sports car an icon across the globe.

Porsche has attempted to incorporate many of the suggestions that car enthusiasts have given for the new GT3, and so this new race car is sure to be more rewarding to drive, especially for those who have been behind the wheel of a GT3 before. That being said, the most exciting aspect of the new 992 GT3 is arguably the fact that it will generate over 500 horsepower.

The finishing touches are still being put on the 992 GT3, but Porsche has released enough details to get us excited for its newest hardcore model. Here’s everything we know so far about the 2021 Porsche 911 GT3 so far.

Porsche’s head of GT cars, Andreas Preuninger, appeared on Carfection’s YouTube channel and Top Gear to discuss the GT3’s upgrades. He claims that while the new GT3 is bigger, Porsche engineers worked tirelessly to reduce its overall weight. According to Road & Track, the new 992 GT3 Cup race car is expected to weigh just 2,778 pounds dry, or without fluids or gas. Expect the road-going GT3 to be heavier, but not by much.

The GT3 has cut weight thanks in part to its lightweight exhaust system, which is lighter despite the fact that it is fitted with gas-particle filters to meet government regulations. Despite being lighter and more eco-friendly, Preuninger told Carfection that the exhaust note will be, “emotional, acoustically present, and louder.”

While the 911 GT3 is based off a track car, its styling isn’t nearly as aggressive as, say, the Subaru WRX STI. Honestly, that’s not such a bad thing. The 2021 992 GT3 will feature a standard carbon fiber hood with deeper air intakes for improved airflow into the engine bay. Its front bumper will also integrate a wide central air intake that is larger than that of the outgoing model. The new GT3 will also have a new rear diffuser and be fitted with bigger, wider wheels and tires for enhanced road grip, which will be matched with bigger brakes for solid stopping power.

While all of that sounds pretty standard, the new GT3 does have one controversial exterior design element: its huge “hung” rear wing. According to Preuninger, this atypical rear wing design achieves less drag and more downforce. It also complements the GT3’s track-focused look. Along with the rear wing, the new GT3 will also have a new rear diffuser that has a much less controversial look. These and all the other aerodynamics-focused features on the exterior of the new GT3 are expected to achieve 50 percent more downforce than the outgoing 991.2 GT3.

There Will Be 510 Horsepower on Tap — And a Manual

GT3s have always been naturally aspirated, and thankfully, Porsche managed to keep it that way with the 2021 model. Porsche massaged its naturally aspirated, rear-mounted 4.0-liter straight-six engine, making it produce up to 510 horsepower, all without the aid of a single turbo. This high-revving engine will be offered with a 7-speed manual transmission or an 8-speed dual-clutch PDK transmission. Whether you are racing the shift stick or manual PDK transmission, the GT3’s infotainment system alerts you when to change gears to maintain peak power.

The new, upgraded 510-horsepower engine is expected to rev up to 9,000 rpm, just like the engine it is replacing. Porsche tried to squeeze out as much power from the older engine while meeting strict regulatory standards. Top speed is expected to be limited to approximately 198 mph. Expect quicker times than the 3.6-second 0-60 mph time of the outgoing 991.2 GT3. The new GT3 offers an improved launch control system that enables it to get off the line quicker, although we don’t know how quick just yet as the official straight-line performance times have not yet been revealed.

The Suspension Is Inspired By the 911 RSR

Porsche has given the new 911 GT3 a new double-wishbone front suspension inspired by that of the 911 RSR, Porsche’s hardcore endurance racecar. Its multi-link rear suspension has been enhanced to keep up with the upgrades in the front. As a result, the new 911 GT3 comes alive in the corners, has sharper steering, and delivers precise handling. The upgraded suspension is especially important for those looking for a turnkey track car that doesn’t need a ton of modifications to post competitive lap times.

The Interior Is Less Livable, but Still Luxurious

The new GT3’s interior is essentially a 911’s interior but less luxurious. It is stripped down to the bare minimum for weight savings, with everything that is not required for racing removed, such as the rear seats. The luxurious power-adjustable seats on the regular 911 have been replaced with lightweight carbon fiber sport seats to save weight. Don’t be shocked if Porsche offers leather strap door handles as an optional extra to replace the aluminum ones to further cut weight.

The 911 GT3’s interior will be barebones, but there will still be some creature comforts on offer, such as Porsche’s infotainment system. However, it is unclear whether it will be fitted with extras such as a stereo, Android Auto, and Apple CarPlay as standard. If anything, those features may be relegated to the options list.

Don’t Expect It to Be Cheap

Porsche has not released any details regarding the pricing of the 2021 911 GT3. CarAndDriver is predicting an MSRP of about $145,000, which would be a slight bump over the current 991.2 GT3’s MRSP of $143,600. Of course, with options the new GT3 will cost much more than whatever its sticker price reads. Speaking of, Porsche has teased a GT3 Touring package that is more practical and less track-focused (it loses the massive rear wing).

Porsche Put a Ton of Money Into Meeting Regulations

The new GT3 is a testament to Porsche’s innovation and unmatched desire to stay ahead of the curve. Preuninger told Edmunds that 80% of the GT3’s development budget was spent on meeting regulations on efficiency, emissions, and noise. While this has pushed competitors to turbocharge and electrify their models to get more power, Porsche stuck to its guns with the GT3. 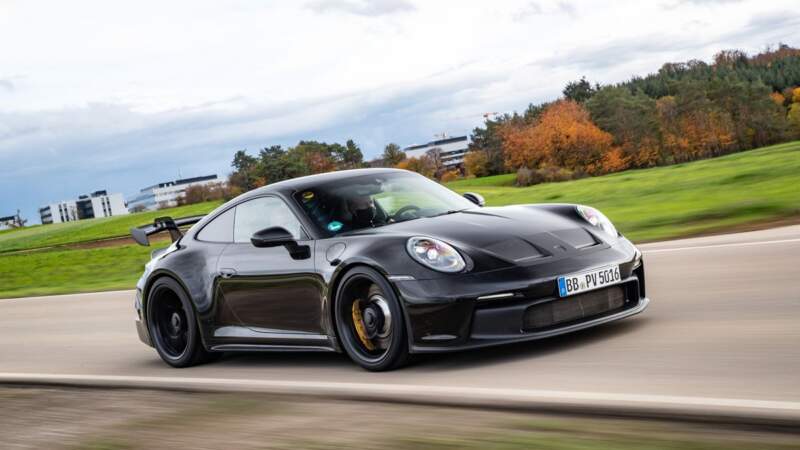