Crossover SUVs are the hottest vehicles on the road today, and there are more being made each day. However, it’s getting tough to tell which crossovers are the best of the bunch.

A midsize crossover like the 2019 Honda Pilot makes perfect sense for many drivers. In production since 2002, the latest Pilot models are seeing a few changes to styling, an updated infotainment system, and new active safety tech standard. Let’s take a closer look and find out if the 2019 Honda Pilot is the perfect solution for you.

Naturally, drivers who need to transport people will weigh the practicality and versatility of a minivan against the desirability of an SUV. In that respect, the 2019 Honda Pilot has a massive advantage over a minivan.

The Pilot is infinitely better-looking than even the most stylish minivan on the market. For 2019, the Pilot got new LED headlights, a revised front grille design that sits above a faux skid plate, updated tail lights, and more chrome. The overall silhouette of the Pilot isn’t far from that of a minivan, but it’s more than enough when combined with the front and rear fascias that are 100 percent SUV.

These new updates make the Pilot a pretty stylish way to transport up to eight people.

Honda keeps things nice and straightforward when it comes to the 2019 Pilot powertrain. All models get the same engine, a 3.5-liter V-6 that develops 280 horsepower and 262 lb.-ft. of torque. Base LX, EX and EX-L models see that engine mated to a six-speed automatic transmission. Touring and Elite trim levels get a nine-speed automatic instead.

While more is often better, in this case, a test drive might make you choose the six-speed auto. The nine-speed isn’t bad, but it can feel a little jerky when it shifts. The nine-speed also has a button interface that might not be to your liking.

All models other than the range-topping Elite are standard front-wheel-drive with all-wheel-drive available. The Elite is standard all-wheel-drive. If you intend to do some towing with your 2019 Pilot, front-drive versions can tow up to 3,500 pounds. The extra capability of all-wheel-drive takes the tow rating up to 5,000 pounds.

Though nobody would consider the Pilot to rival to the Jeep Wrangler in off-road capability, the Honda is actually more capable when the pavement runs out than most of its rivals. A higher ground clearance than most of its competitors, a four-mode traction control system with a hill-hold function, and an optional all-wheel-drive system that requires no driver intervention all make the Pilot pretty useful.

The Pilot starts off very well in passenger comfort, largely thanks to an interior that’s bigger than it looks. Not only is there plenty of room for eight people, but there’s also plenty of room for hauling stuff too. Excellent use is made of the interior space with clever storage solutions throughout the Pilot’s cabin.

Every Pilot beyond the entry model gets a 10-way power driver’s seat, and models with leather upholstery also get a memory function. The second-row seat accommodates three people comfortably, and the bench can be swapped for a pair of captain’s chairs in Touring and Elite trim levels.

If you have safety high on your agenda, there isn’t a vehicle with better safety credentials than the 2019 Honda Pilot.

A suite of advanced safety features that are now standard across the 2019 Pilot range includes Road Departure Mitigation, Collision Mitigation Braking, adaptive cruise control, traffic sign recognition and plenty more. Needless to say, the peerless list of standard safety kit included with the Honda Pilot led NHTSA to give it a full five-star rating for overall safety, and the IIHS awarded it the coveted Top Safety Pick+ rating.

There’s no shortage of vehicles that offer three rows of seats, especially in the SUV market. However, the majority are full-size crossovers or old-school, truck-based SUVs.

While the 2019 Honda Pilot doesn’t quite deliver the same capability and functionality of a minivan, it comes closer than most of its midsize rivals. There are cooler, sportier and more desirable midsize crossovers with better performance out there, but if you need more than five seats on a regular basis, the 2019 Honda Pilot is a great choice. 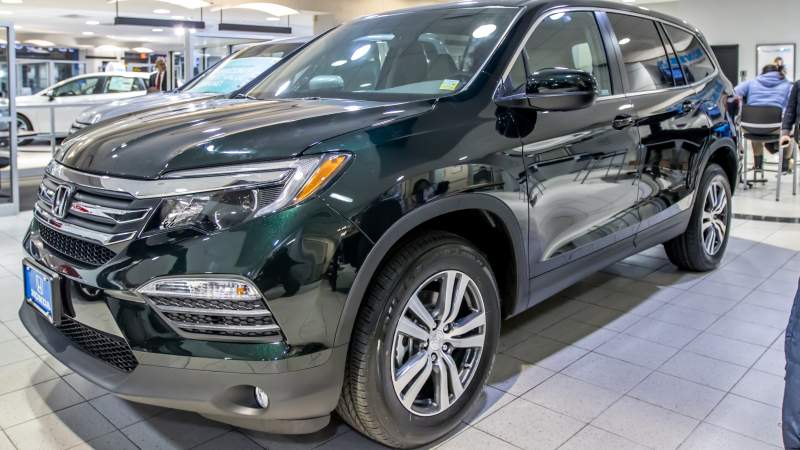