2018 Toyota Rav4 Hybrid: The best hybrid compact CUV out there, but not for long

The compact crossover segment is booming, as is the market for hybrid cars. Considering that fact, you’d think that there’d be a huge market for affordable hybrid compact crossovers as a result, right? Well, not exactly. Buyers who want a hybrid CUV don’t have many options, at least not right now. There’s the Toyota Rav4 Hybrid, Nissan Rogue Hybrid, and Mitsubishi Outlander PHEV. That’s it — at least for now.

Of these three, the Mitsubishi Outlander PHEV is the newest, but an all-new Rav4 Hybrid is set to hit dealer lots in January of 2019. The new Rav4 Hybrid will feature a completely redesigned, interior and exterior, and will reportedly be able to travel 600 miles on a single tank of gas. There’s a lot to get excited about, even if you aren’t a fan of hybrids.

That said, there are still a few reasons to be excited about the 2018 Toyota Rav4 Hybrid, as we recently learned after spending a week behind the wheel of one (provided by the automaker).

All Rav4 Hybrids come equipped with a 2.5-liter four-cylinder engine, which is paired to two electric motors. One motor provides extra power to the two front wheels, while the second motor sends power to the rear wheels when all-wheel drive is called upon. The only transmission on offer is a CVT, which features an imitation self-shifting mode. The combined power output of the Rav4 Hybrid is 194 horsepower, which tops the gas-powered model’s 176 ponies. Of course, that extra power doesn’t come without a cost. The 2018 Rav4 Hybrid is heavier than its gas-powered stablemates. The hybrid has a curb weight of 3,925 pounds, which is 295 pounds heavier than petrol-powered Rav4 SE equipped with AWD.

Despite weighing just under two tons, the Rav4 Hybrid doesn’t feel heavy when you’re behind the wheel. Power is delivered smoothly and on-demand, provided you aren’t in Eco Mode. There’s plenty of pickup, whether you want to beat someone off the line at a red light or if you’re trying to make a last-minute lane change on the highway. The Rav4 Hybrid isn’t going to win you any pink slips, but it’s 0 to 60 mph time of 8.1 seconds is a full second faster than the Nissan Rogue Hybrid.

Other than not being the slowest of pokes, there’s not much more about the Rav4 Hybrid that drivers will love. The electronic steering is numb and offers little to no feedback to drivers. The suspension is tuned to comfort, but the cabin can still be easily shaken by medium-sized bumps in the road. While the 2018 Rav4 Hybrid isn’t a driver’s car, it is a practical one for sure, which is exactly what Toyota is selling.

The Rav4 Hybrid’s real strengths lie in its impressive fuel economy figures and spacious cabin. The EPA gives the hybrid an mpg split of 34/30/32 (city, highway, combined). Our tester averaged 28.1 mpg, with driving split pretty evenly between in-city trips across Chicago and a round-trip trek from the Windy City to Milwaukee. Had we stayed in a single driving mode and not mashed the accelerator at every chance, it’s highly likely our combined mpg average would have broken into the 30s. 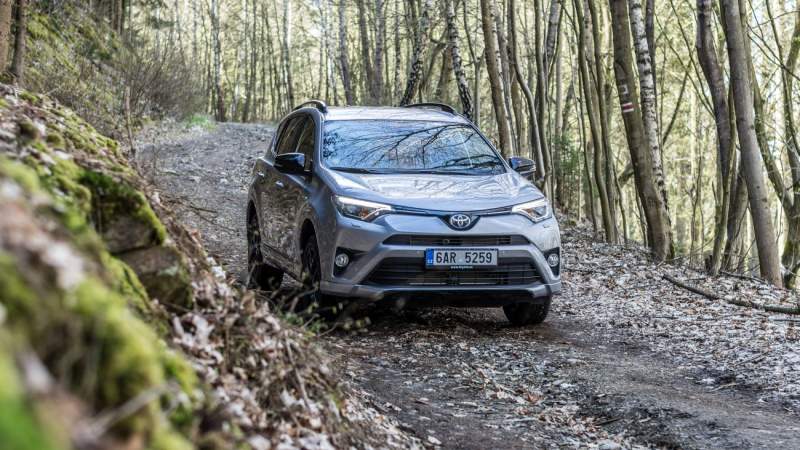 While the Toyota Rav4 Hybrid does comes equipped with an electricity-only driving mode, we found it to be next-to-impossible to use. You’ll encounter two issues when trying to use this driving mode. The first is that the battery won’t have enough juice to even enter electricity-only mode. If you do have enough of a charge, you’ll need to watch how hard you hit the accelerator. If you try to do more than five or 10 mph, EV mode will instantly disengage. This mode is basically useless and left us wondering why Toyota’s engineers even included it in the first place.

Automakers like Mazda have proven that even affordable cars and crossovers can feature elegant cabins. Meanwhile, the Rav4 Hybrid has a ho hum look featuring a lifeless dashboard design and a center stack that has way too many buttons. The good news is that the bland seats are pretty comfortable, with the driver’s seat featuring power adjustable bolsters and lumbar support. The rear seats offer plenty of leg and headroom, even when sitting behind front passengers who stand over six feet. Seating three adults in the back might be doable, but it will definitely be a tight squeeze.

Standard features on the SE trim include a 6.1-inch touchscreen infotainment screen, a steering wheel wrapped in leather, dual-zone climate control, and 18-inch five-spoke alloy wheels. The Rav4 has a pretty boring exterior design, but the wheels paired with our tester’s Electric Blue Storm paint did add a bit of pop. There are two options packages available, and our tester came with the cheaper of the two. The $1,310 Entune Premium JBL Audio with Integrated Navigation package ups the size of the infotainment screen to seven inches, adds navigation and Toyota’s Entune App Suite, Siri Eyes Free compatibility, and an 11-speaker JBL GreenEdge sound system complete with a subwoofer.

We recommend passing on this package as the added features don’t really do much, except drive up the total cost of the car. The upgraded audio system didn’t blow us away with its quality and the navigation system is capable at best and frustrating at worst. Toyota’s tech and infotainment system are in desperate need of an upgrade, which makes the fact that Android Auto and Apple CarPlay aren’t on offer even more of a glaring omission.

While the entertainment tech leaves a lot to be desired, Toyota did not skimp on the safety technology and driver’s assistance aids. Toyota Safety Sense-P is standard and features automatic high beams, a pre-collision system with pedestrian detection, radar cruise control featuring lane tracing assist, and a lane departure alert. Blind spot monitoring and rear-cross traffic alert are also standard on the SE trim, as is a backup camera. Front and rear parking sensors and a 360-degree surround view camera are also available as part of an options package that runs $2,785.

The Rav4 Hybrid’s radar cruise control deserves a special shout out. It’s not quite self-driving tech, and the system is a bit too quick on the brake when traffic starts to stutter, but Toyota’s tech is more than capable of keeping the CUV in between the lane lines, which makes mid-speed slogs on busy freeways much easier to deal with.

When it comes to the competition, the 2018 Rav4 Hybrid doesn’t really run away from the Rogue Hybrid or Outlander PHEV. The Nissan offers more style and tech — Android Auto and Apple CarPlay are now standard — but the two cost about the same and the Rogue Hybrid is down on power. Also, for some reason the Rogue Hybrid isn’t available at Nissan dealerships in the Northeast. Weird. As for the Outlander PHEV, well, it’s pricier, with a starting MSRP of $34,495. But it does offer more storage space and can drive about 20 miles on electricity alone. The space will soon become more crowded as more automakers seek to boost their compact CUV sales figures by adding hybrid variants, but for now, the 2018 Rav4 Hybrid is this small segment’s leader, if only by a nose.

Really, the bigger question is if better fuel economy is worth a higher sticker price. Our verdict is “yes.” For example, the entry-level Rav4 LE Hybrid starts at $27,385. A base Rav4 optioned with all-wheel drive checks in at $26,060. That’s not a terrible markup. Our tester, with its options package included, rang in at $34,580, a figure which includes the $995 delivery fee. A gas-powered Rav4 SE comes standard with AWD and is just $2,000 cheaper than the SE Hybrid.

That being said, we still think it’s worth waiting until early 2019 when the new Rav4 Hybrid is released. Yes, it’ll more than likely be pricier, but you’ll get a much better looking CUV with an upgraded interior and more modern technology. If you can’t wait, then the 2018 Rav4 Hybrid is a fine buy, but do yourself a favor and try to hold out just a little longer. 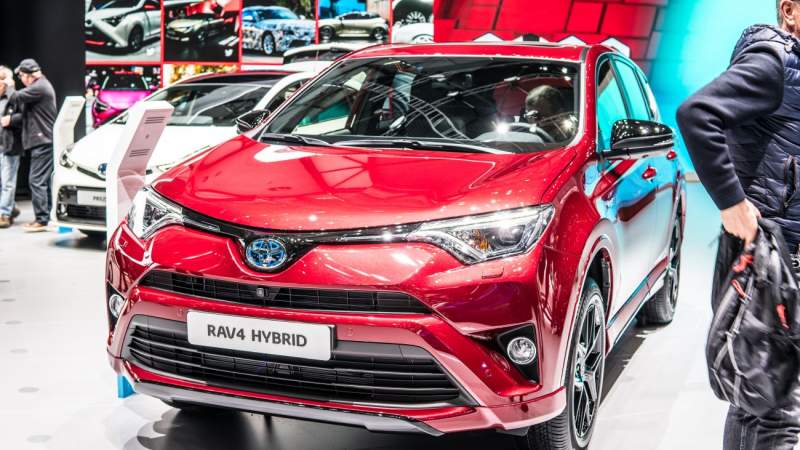