German luxury automotive manufacturer Audi gave its lineup quite the refresh a year ago, adding sharper lines and creases to the otherwise surprisingly aerodynamic looks the marque is known for. The 2018 Audi Q7 still sports a trio of rows for up to seven passengers. With a choice between two capable powertrains and of course a slew of upgrade options, Audi’s Q7 is a strong contender for those looking for a comfy ride, respectable power, and a sense of prestige only Audi can offer.

If you’re considering the 2018 Audi Q7, take a gander at what we’ve compiled on the model. Audi isn’t quite the cream of the crossover/SUV crop, but the brand does price its models affordably. Let’s begin with the powertrain options.

For those looking to put their Audi to work, the 2.0-liter engine is capable of towing up to 4,400 pounds, while the powerful V6 hauls up to 7,700 pounds. Not bad for an SUV most owners will probably never drive off-road. But the capabilities are there if you need them.

Customers can purchase the 2018 Audi Q7 in the following colors:

Kelley Blue Book (KBB) claims that no matter which engine your 2018 Audi Q7 comes equipped with, they both achieve a 19 city and 25 highway EPA-estimated mpg rating. All-wheel drive — or quattro, in Audi-speak — is standard on all models. Given this, KBB still ranks the 2018 Audi Q7 at 10th out of 18 competitors. So, while the mpg rating is about standard for an all-wheel drive, three-row SUV, it lags behind the competition.

All the same, the 2018 Q7 does post respectable numbers. However, the fierce competition of the SUV segment means that any marque wanting to stand out should focus on a complete package. Audi nears that mark with their 2018 Q7. 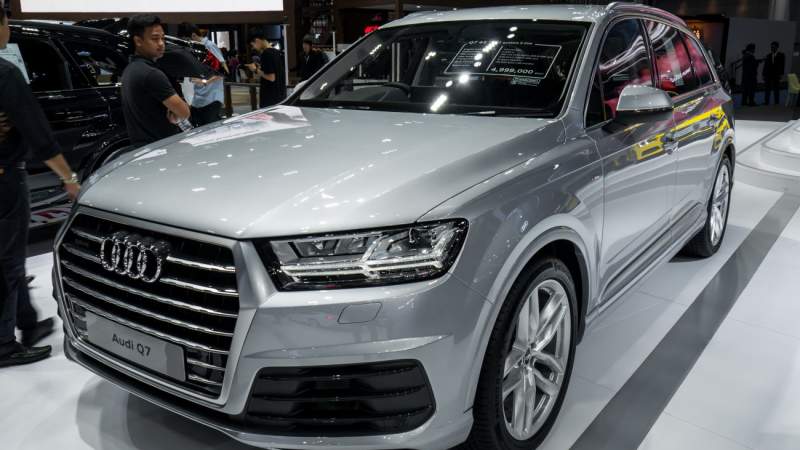 The National Highway Traffic Safety Administration (NHTSA) awarded the 2018 Audi Q7 a full five stars for crash test, side barrier, and side crash ratings. For the frontal crash and rollover rating, it received four out of five stars. According to Edmunds, the Insurance Institute for Highway Safety (IIHS) gave the 2018 Q7 a “Good’ rating in all categories. J.D. Power rated the SUV above average.

Audi offers the 2018 Q7 in the three following trim levels:

Other notable features on the 2018 Q7 include a 12.3-inch instrument display, Bluetooth, and a seven-inch infotainment screen. Safety features like night vision assistant, active lane assist, and rear cross traffic assist complement Audi’s Pre-Sense City, which detects objects in front of the vehicle and warns the driver. Android Auto and Apple CarPlay are also available on the 2018 Audi Q7.

Audi has continually spent as much time on their technology as their interior quality. Options in both categories are this marque’s strong suit, but they don’t necessarily leave other aspects of their vehicles behind. Audi offers a more refined package than most competitors, while still leaving room for more upgrades.

The Audi Q7 competes in one of the toughest segments of the entire automotive industry. Amongst small crossovers that meld sedan-like handling with the capabilities found in most three-row SUVs, not to mention the rest of those very two- and three-row automobiles, the Q7 makes its mark with the Audi stamp: luxury, relative affordability, and style.

Kelley Blue Book ranked the 2018 Audi Q7 low on the list of the most powerful SUVs and crossovers on the market today. All the same, the competition doesn’t necessarily sport the most refined and sophisticated interior as only Audi can. This is perhaps where Audi made the best of both worlds, putting an engine pair with decent amounts of power into an SUV that prides itself on comfort.

Competitors include the Volvo XC90, the Volkswagen Atlas and Touareg, Acura’s MDX, the Land Rover Discovery, Lincoln’s MKX, Jeep’s Grand Cherokee, BMW’s X5, and the Infiniti QX60. While each competitor offers their own set of options and trim levels, Consumer Reports puts it best: “you get what you pay for.”

While it’s true that Mercedes-Benz, Jaguar, and Alfa Romeo offer stylish SUVs that command just a tad more automotive respect, Audi holds a strong position among the middle of the pack. Mercedes stocks strong power and upscale interior materials in their SUVs. While Jaguar and Alfa both put forth highly-capable powerplants, they all come with a price tag to match. Lower-end models like those offered by Volkswagen, Acura, and Lincoln don’t bring much in terms of competition for the Audi Q7.

Audi continues to offer the complete package, from their sporty and stylish sedans to their capable and comfortable SUVs. The 2018 Audi Q7 is no exception. If you’re looking for the perfect crossover to get you across town and keep you feeling like you’re in your favorite armchair at home, check out the 2018 Audi Q7. 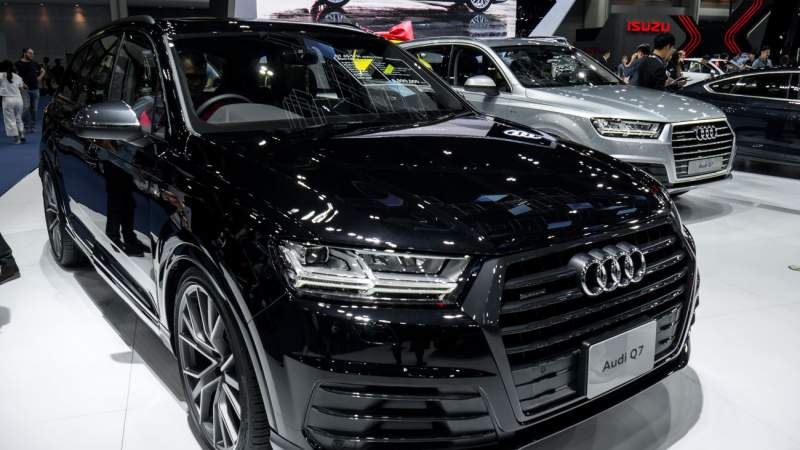