When it comes to electric vehicles, range matters. How far an EV can travel on a single battery charge is critically important for any potential buyer, especially given the lack of public charging stations available in most cities and towns. The EV infrastructure is slowly increasing, but hardly fast enough for automakers who are trying to convince customers to make a drastic change.

Most analysts agree that car owners would be much more enthusiastic about EVs if they could travel further distances before requiring a battery charge. Automakers are well aware of this fact and are working to improve the range of their electric vehicles all the time (along with putting money into increasing the number of places you can charge an EV). But for now, in 2019, here are the 10 electric vehicles that can drive the furthest on a single battery charge.

Another car that’s not setting the world on fire in terms of its range is the BMW i3. At 193 miles per charge, it remains a good option for people who want a reliable EV that is suitable to run errands in and can be counted on to get you to the grocery store and back on a single charge. A Range Extender hybrid edition pushes the range to over 200 miles, but that somewhat defeats the purpose of buying an all electric car.

Plus, it’s still a BMW. And it looks like a BMW in terms of its style, handling, and interior features. The automaker recently announced plans to keep the i3 alive with planned improvements in an all-new 2020 model. However, you’re also be paying like it’s a BMW, since the i3 starts at about $44,000. There are EV options with more value, but they won’t be a Beemer.

It doesn’t have the greatest range per battery charge at just 186 miles, but the Renault Zoe does have some things going for it. Namely the fact that it is one of the most affordable electric vehicles at a starting price of around $25,000. Unfortunately, the Zoe is primarily sold only in Europe, which makes them difficult (if not impossible) to find in North America.

It also is known for having one of the fastest battery charging times at under two hours. While it isn’t breaking any records in the distance category, the Renault Zoe is a good option for people who just want a compact runaround car that is good for the environment. If you never really leave your city with your car, the Zoe is a great affordable option.

While 226 miles may not see like a long distance, keep in mind that the 2019 edition of the Nissan Leaf expanded the range that this vehicle can go on a battery charge from 150 miles previously. That additional 76 miles is a big improvement for the Nissan Leaf, which has long been the electric vehicle of choice among millennials and urban dwellers who tend to keep their driving within city limits.

A compact car, the Nissan Leaf remains the little electric car that could with aspirations for greater driving distance in the future. It also starts at around $30,000, making it one of the cheaper EVs on the market for those who want to jump on the green bandwagon early. Unfortunately, you’ll have to pony up a bit more cash to get the Leaf S Plus model if you want the full range. The base model only gets about 150 miles per charge, with it’s smaller battery.

The Jaguar iPace is one of the more intriguing electric vehicles on the market today. Not only is it Jaguar’s first ever EV, it’s also a midsize crossover SUV. And a luxury one at that, complete with all the bells and whistles one would expect in a Jag.

While the driving range on one battery charge may seem a little lacking at 234 miles, the iPace has other qualities to recommend – namely the 395-horsepower engine and can reach 60 miles per hour in 4.5 second. Who says electric vehicles are timid? On the other hand, the starting price hovers around $70,000, which is on definitely on the high end for a car that needs recharging after three or four hours.

Like the Nissan Leaf, the Chevy Bolt has proven to be a sturdy, reliable, and well-regarded electric vehicle – popular among urbanites and drivers under age 40. And at 238 miles of range per battery charge, people could certainly do worse than pick the Bolt as their EV of choice.

Chevrolet continues to see big possibilities in the Bolt and plans to discontinue the gas/electric hybrid version of the car in 2019 – leaving only the fully electric version available for consumers. This seems like a natural evolution. People who are interested in the Bolt should act quickly to get one, as U.S. federal tax credits on the car are being phased out in 2019.

Audi is hoping to entice customers to go electric with its new E-Tron, a luxury sedan that seats five people comfortably and boasts all-wheel drive. While not cheap at more than $75,000, the E-Tron nevertheless has a powerful engine and a range of 248 miles on a battery charge.

The all-wheel drive capability allows the E-Tron to go over terrain most electric vehicles can only dream of. It performs better than many other EVs too, going from 0-to-60 mph in just 3.5 seconds. The 800-volt charging system can also refill the battery to about 80 percent in just 20 minutes.

People looking for a more affordable electric SUV, albeit a compact one, should consider the Hyundai Kona Electric (not to be confused with the normal hybrid model). Also new for 2019, Hyundai is betting that consumers will like the Kona’s range of 258 miles on a single battery charge, as well as the fact that it can be purchased for around $30,000.

That’s for the base model though, and you’ll almost certainly want to grab one of the more featured models, that can run closer to $40,000. While not as luxurious as the other electric SUVs on the list, the Kona has garnered positive reviews for its range and sturdiness, for a bit of a cheaper price. Best of all, it doesn’t look like an electric car — something that turns off some potential buyers.

You knew we were eventually going to get the Tesla vehicles on this list. To their credit, all three of their models are at the very top end of EV range. We start with the Model X, currently the best-selling Tesla, thanks in large part to the fact that it’s an SUV rather than a sedan. It also boasts gullwing doors and state-of-the-art technology features and infotainment system.

At nearly 300 miles per battery charge, the Model X has one of the most impressive driving ranges of any electric vehicle on the market today. The Long Range model actually extends the Model X’s range to about 325 miles. But act fast, as the U.S. federal tax incentive on this vehicle will end in 2019. It’s among the priciest EV models too, with the Performance Edition (plus Ludicrous Mode) costing well over $100,000. Even the base model starts at around $85,000.

It is “just a sedan,” but don’t hold that fact against the Tesla Model 3. With the ability to go 310 miles on a single battery charge, the Tesla Model 3 is about as good as any electric vehicle out there when it comes to distance. And, Tesla has finally delivered on its long-held promise to get the cost of the Model 3 down to $35,000.

The combined price and distance per battery charge should give the Model 3 the benefit of the doubt among consumers. This electric vehicle is certainly worth consideration. Now if only Tesla could actually get them off the assembly line in a reasonable time frame, to meet customer demand.

We should note that the standard Model S is only rated for 285 miles (which would still put it in the top three of this list), but the Long Range and Performance versions extend that range to 370 miles and 345 miles, respectively. How long the Model S holds the title for longest range remains to be seen. But in 2019, it is the top choice for anyone wanting an electric vehicle that can go the distance. Like the Model X, though, it will cause a serious dent in your wallet, with a starting price of about $75,000 — before any upgrades in trim, range, or other features. 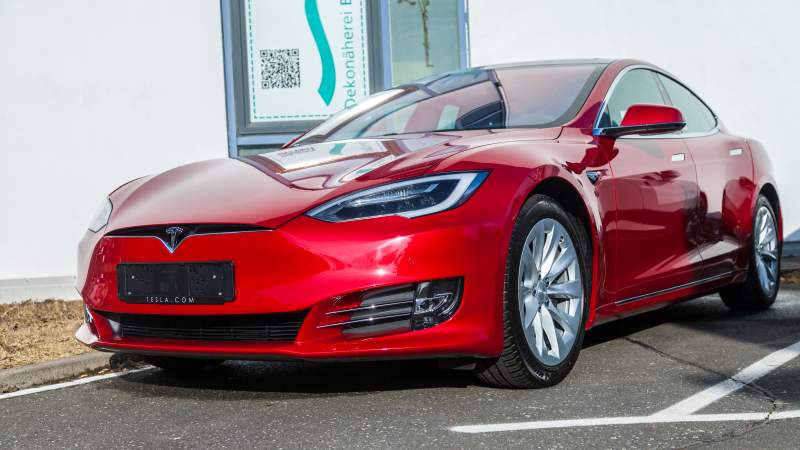