Why Cars Rust (And The Best Ways to Prevent It)

Nothing strikes fear in the heart of a car owner as much as rust. Okay, maybe that’s a bit of an exaggeration. There are plenty of worse things that can happen to your car than a spot of iron oxide. However, it’s understandable why the sight repulses us.

Rotting metal is not only unsightly, but it can also be dangerous in large enough quantities. Large patches of rust will affect a vehicle’s structural integrity. Rust can also hurt a car’s resale value, as buyers generally try to stay clear of rusted cars.

Given enough time, oxygen, and water, any iron mass will eventually completely rust and disintegrate. But why do some new vehicles rust in less than two years, while some can go decades without so much as a spot? There are a variety of factors that can affect a vehicle’s susceptibility to corrosion. Before jumping to how to prevent rust, we must understand why it happens in the first place.

On a super basic scientific level, rust is another name for iron oxide. Iron oxide forms when a metal that contains iron (such as steel) is exposed to oxygen and moisture for a long period of time. Automobile bodies are typically made from steel because it’s strong, durable, and readily available. Unfortunately, steel contains iron, which means it’s susceptible to iron oxide.

Since all vehicles are susceptible to rust in one way or another, there are significant gaps in warranty coverage. While outer metal panels will generally be covered as long as you take your vehicle in for regular inspections, there are lots of parts in your vehicle that may not be. Internal components such as fuel and brake fluid lines can corrode over time. You may not even know it’s happening, either.

Newer vehicles are, in general, much less susceptible to rust than their older counterparts. The paint used on new vehicles offers some protection, as does the use of galvanized steel. Under the right circumstances, galvanized steel can last up to 70 years without corrosion occurring. However, during manufacturing, galvanized steel is bent, cut, drilled, and heated. That can compromise its integrity. This is why areas made from this steel, such as doors and body panels, are more likely to rust.

Rust only requires an anode, cathode, and electrolyte to form. The metal in your car supplies the anode and cathode, while water is the electrolyte. This is why rust is more likely to form in more humid climates. Living near the ocean is an especially good way to attract rust, due to the high salt content of humid ocean air.

Speaking of salt — it’s especially good at generating rust. Salt water is much more effective at carrying electrons than water with a low salt content. It’s also more effective at eating away at your car. The situation gets even worse if you live in a colder climate where road salt is used to get rid of ice and snow.

Other than living in a dry climate, rustproofing is your best defense against iron oxide. However, whether it’s worth the investment depends on your situation. If you live in the desert, it’s probably not necessary. On the other hand, if you live in a northern climate and plan to keep your vehicle for the long haul, rustproofing is definitely worth looking into. The problem is, there are a few different methods available. Which one works best is a matter of some heated debate in auto circles. Ultimately, you’ll want to consult a technician before making the investment. However, here’s a breakdown of how the various rustproofing methods work.

One of the newest rust protection methods on the market, electronic modules are also arguably the most controversial. Essentially, it’s a small device sold by dealers that must be installed in your vehicle (by a professional, of course). By emitting a weak current through a vehicle’s body, electronic modules prevent reactions with oxygen. That, in turn, prevents rust from forming. At least, that’s the idea. There is much dispute over whether electronic modules are truly effective. That makes them an unreliable form of rustproofing, according to many. Buyer beware.

Originally introduced in the 1950s to make car rides quieter, tar-based sprays or “undercoating” are a noninvasive and affordable rustproofing option. A technician applies a black, tar-like coating to the floor pans, wheel wells, and other exposed parts of your car’s underbody. Once the substance hardens, it acts as a permanent shield against elements like moisture and salt.

The downside to this method is that moisture can still seep in under the seal over time and eat away at the metal underneath. It can also crack, allowing water to get in. For this reason, it’s best to get yearly inspections if you use a tar-based spray. That will add to your annual maintenance costs.

Much like a tar-based spray, dripless oil rustproofing protects your car’s underbody by forming a moisture seal. In this regard, a dripless oil spray does a more thorough job, as it covers more surface area, including some interior regions of the car.

Unfortunately, dripless oil sprays are more invasive than tar-based sprays. In order to maximize the area covered, holes need to be drilled into the frame of the vehicle. This is why you should absolutely let a professional handle this rustproofing method, as they’ll be able to drill discreetly. Much like a tar-based spray, it’s recommended you get an annual reapplication to maximize the effectiveness.

As implied by its name, a drip oil spray is similar to a dripless spray but with more leftover residue (read: dripping oil). They’re applied in the same way as dripless oil sprays too, with holes being drilled into your car’s body. It’s arguably a more effective method, as the oil can get to parts of your car that the dripless oil can’t. For this reason, drip oil sprays are the most popular and trusted form of rustproofing.

The only real knock is that drip oil sprays leaves a bit of a mess. The oil will drip off your car for about two days after application. If you don’t want oil stains on your driveway or garage, it’s best to park your vehicle somewhere else. Most people opt to leave their vehicles on the road or anywhere you won’t mind leaving some oil stains. Yet again, it’s best if you get a drip oil spray reapplied annually.

Other Ways To Prevent Rust

Rustproofing is your best line of defense against corrosion, but it’s not 100% effective. Unfortunately, there’s no way to guarantee your vehicle won’t develop rust, but there are things you can do to greatly minimize the risk. If you don’t live in a warm, dry climate, the following tips can help prevent rust from forming.

Where and how you park your vehicle can be a major determining factor in whether or not rust forms. Since your vehicle likely spends most of its idle time parked at home, you should take whatever prevention steps you can. Park on a paved surface if you can, as this will expose your vehicle to significantly less moisture than a surface covered by grass, dirt, or snow. Cracked asphalt surfaces can also expose your car to unneeded moisture, so apply some sealer or even consider repaving if your driveway is in rough shape.

Keeping your vehicle parked in a garage is also a great idea, but it’s not as effective as you might think. Believe it or not, if your car is coated in salt and slush and you park it in a warm garage, it will rust faster than if you were to leave it out in the cold. This is why it’s also important to…

Remember how we mentioned that your car’s paint acts as a moisture seal? Well, it’s important to take care of your car’s paint job so it can maintain rust prevention. The best way to do this is to keep your vehicle clean. You should wash it at least every two weeks and apply a wax coating once a month. You’ll also want to ensure you’re washing the underbody, especially if you live in a harsher climate.

All that road salt and other grime collects underneath your vehicle and can become a serious problem if it’s left to fester. If you’re able to jack the vehicle up, you’ll be able to clean the undercarriage more thoroughly. However, as long as it’s a trusted business, a car wash service with an undercarriage cleaning option can get the job done too.

As for the previously mentioned slushy winter garages, they need cleaning too. If you want to prevent your car from growing ugly brown spots, make sure to shovel or sweep out the excess snow/sand/salt regularly during the winter. If you’re being extra careful, knock off those gross snowy buildups behind the wheels before you park your beloved ride inside.

What If My Car Already Has Rust?

If you find yourself in a situation where rust has started to form on your vehicle, don’t panic. There are a few options available. If the rust damage is extensive, it’s probably best to bring it to a mechanic. However, if it’s still minor you can repair rust damage with some tools and a little know-how. This guide from How Stuff Works provides more thorough directions but some of your options include:

The final thing to keep in mind is that if your vehicle develops rust, it’s not the end of the world. There are methods available to keep the rust from spreading and turning your car into a scrap bucket. By following these tips and examining your vehicle regularly for signs of rust damage, you’ll give your vehicle the best chance of not falling victim to corrosion. 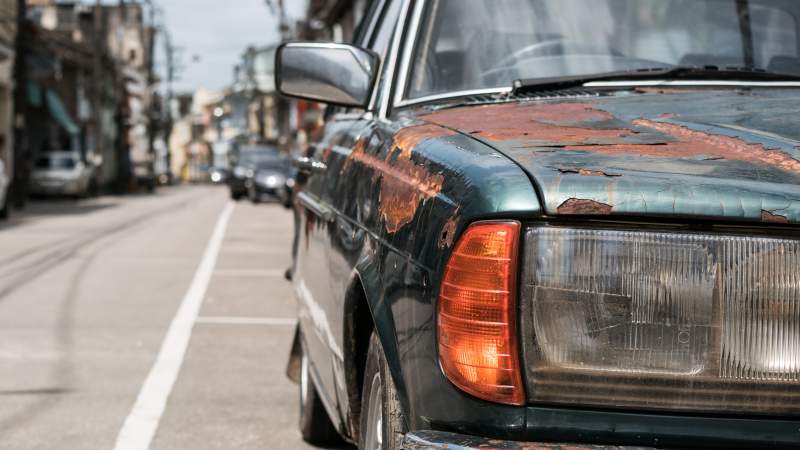