Ford has been exciting consumers for years with their trucks. For 2017, they have added new styling and features to the cars in their lineup, rivaling other top companies like Honda and Toyota. One of the most talked about vehicles in their arsenal is the 2017 Ford Fusion. As a favorite with car buyers since its inception in 2006, the Fusion continues to incite conversation amongst automobile fanatics.

The Fusion is a four door, five passenger sedan with a six speed automatic transmission. In addition to the features that made the Fusion a household name, there are plenty of new options and engine choices. The abundant choices mean the Fusion has something for everyone. The car is available in five trim levels – S, SE, Titanium, Platinum, and Sport. All models have updated styling, backup cameras, push-button ignitions, and additional safety features.

Some trim levels have new options like LED headlights, an enhanced automated parking system, and the Syn3 Infotainment System, which replaced Ford’s My Ford Touch interface. The new system isn’t as visually appealing as the previous one, but it’s much more efficient with its smartphone and tablet-style menus.

In addition to the customizable packages, there is plenty of optional equipment that can be added. Any trim level of the Fusion can add a cross-traffic alert system, inflatable seat belts, a collision warning system, blind-spot monitoring, and a drowsy driver warning system. A sunroof and satellite radio are optional, as well.

Despite the new additives, there are some pitfalls to the new Fusion. The new styling of the roof leaves little headroom in the backseat, which would make it an unpleasant ride for anyone who wasn’t quick enough to call shotgun. Plus, Ford is behind the times when it comes to automatic braking — there isn’t even an option to add this feature. One of the biggest drawbacks is the lack of a manual option. So, you are out of luck if you prefer a manual transmission. 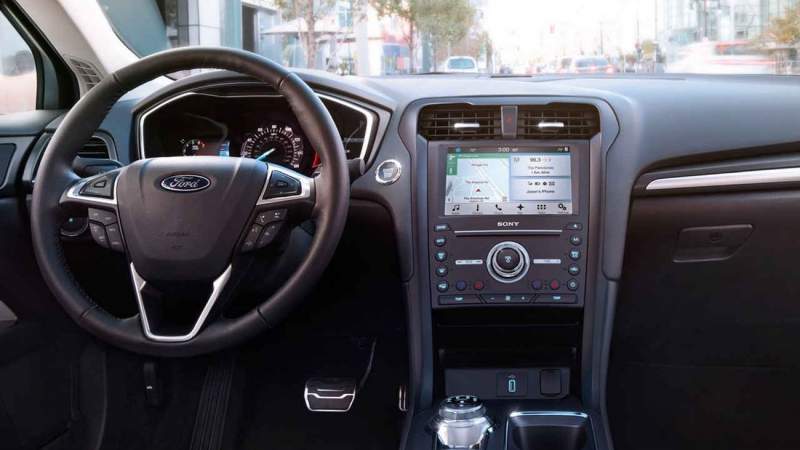