When it comes to cars, a lot can change in a year. Take the Ford Mustang, for example. For 2018, Ford has given its iconic muscle car a makeover. The Mustang has a new look, updated engines, a new transmission, new tech — you get the picture. If you’re in the market for a new sports car and are considering American muscle, here’s everything you need to know about the 2018 Ford Mustang.

In addition to performance gains, the 2018 Mustang does slightly better at the pump. The EcoBoost model gets an EPA estimated 21 mpg city and 31 mpg. The GT gets 15 mpg city and 25 mpg highway.

One thing worth noting is that the track-oriented Mustang Shelby GT350 and GT350R were not updated for 2018. Those models still maintain the previous year’s body styles and engines, which isn’t such a bad thing considering that the 5.2-liter V8 engine these models share is good for 526 horsepower and 429 lb-ft of torque.

Optioning the Performance Package is required if you want to equip the 2018 Mustang with MagneRide dampers. Previously, the only Mustangs available with magnetically adjustable dampers were the GT350 and GT350R. Spec’ing MagneRide adds an extra $1,695 onto the 2018 Mustang’s total. Other performance options of note include an active exhaust, which costs $895 and lets you adjust the sound level of the Mustang GT’s exhaust note.

If you’re not planning on taking your Mustang to the track for hot laps, it’s probably best to pass on the Performance Package and MangeRide suspension system. Both packages drive up the final price and won’t make a noticeable difference in day-to-day driving. There is, however, one performance option that all Mustang owners should consider – the 10-speed automatic transmission.

The 10-speed auto offers better shift times than the six-speed manual. All 0-60 and quarter-mile times quoted by Ford were hit in Mustangs equipped with a 10-speed auto. In addition to boosting performance, the automatic also increases fuel economy. At $1,595 the 10-speed doesn’t come cheap, but it is one of the most advanced automatic transmissions on the market. It’s also the only performance option offered on the 2018 Mustang that makes a noticeable difference both on the track and in traffic.

One of the most noticeable features of the 2018 Mustang is its new front-end design. The hood has been lowered and the hood vents have been repositioned. The grille design has also been tweaked. For the first time LED lighting is standard on every Mustang, from the headlights to the turn signals and taillights.

The redesign is a little less noticeable when viewed from the rear. The 2018 Mustang has revised LED taillights and a new bumper. Models optioned with the Performance Package get a new decklid spoiler too. A dual exhaust is standard on all EcoBoost Mustangs, with a quad-exhaust standard for all GT models.

The biggest new interior feature on the 2018 Mustang is the optional 12-inch digital gauge cluster, which can be customized, and offers three different views. The center console remains mostly the same, but there is a new hand-stitched wrap on it. Other additions include padded knee bolsters and door handles, rings, and bezels finished in aluminum. The key fob has also been redesigned and an optional heated steering wheel is available. 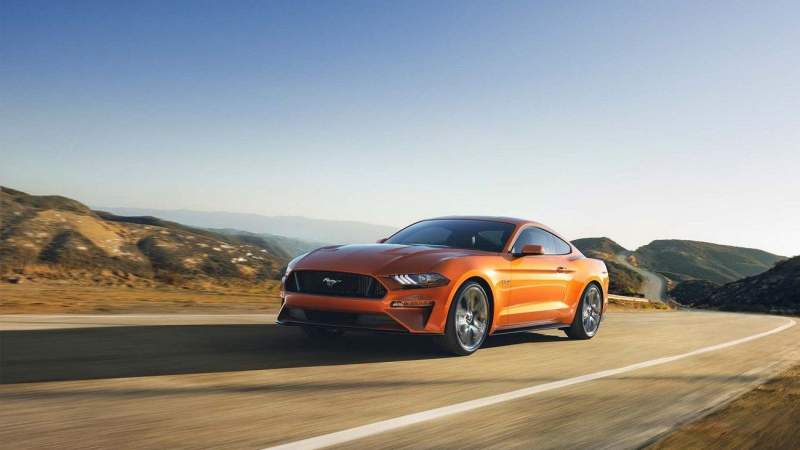 Like in 2017, the 2018 Mustang has only two trims to choose from: standard and Premium. Select the Premium trim and you’ll get an 8.0-inch touchscreen equipped with Apple CarPlay, Android Auto, and Ford’s Sync 3 infotainment technology. This package also includes heated and cooled front seats trimmed with leather, selectable driving modes, aluminum interior trim, and 18-inch wheels (EcoBoost models only).

The Ford Mustang’s biggest competitors are the Dodge Challenger and Chevrolet Camaro. The Challenger hasn’t seen a significant update in years, yet is still very popular with buyers thanks to an old school design and variety of V8 engines to choose from. It’s also the only muscle car available with all-wheel drive.

The Challenger certainly steals sales from the Mustang, but the two muscle cars appeal to very different buyers. Ford has made a concerted effort to make the Mustang handle better around bends, whereas Dodge only seems to care for straight-line speed. For this reason, the Mustang’s closest competitor –– both in sales and design –– is the Chevrolet Camaro.

The Camaro was completely redesigned for 2016, and like the Mustang it offers a turbocharged four-cylinder engine and a burly V8. Unlike Ford, Chevy left the Camaro’s V6 intact. In terms of performance, the turbocharged Mustang is more powerful than the turbocharged Camaro (310 hp vs. 275 hp) and the Ford V8 puts out more grunt than the Chevy’s (460 hp vs. 455 hp).

The 2018 Ford Mustang is a solid buy if you’re looking for affordable power and performance. The Mustang hasn’t yet pulled away from the competition completely, but with this redesign it’s certainly put some more space between itself and America’s other muscle cars. 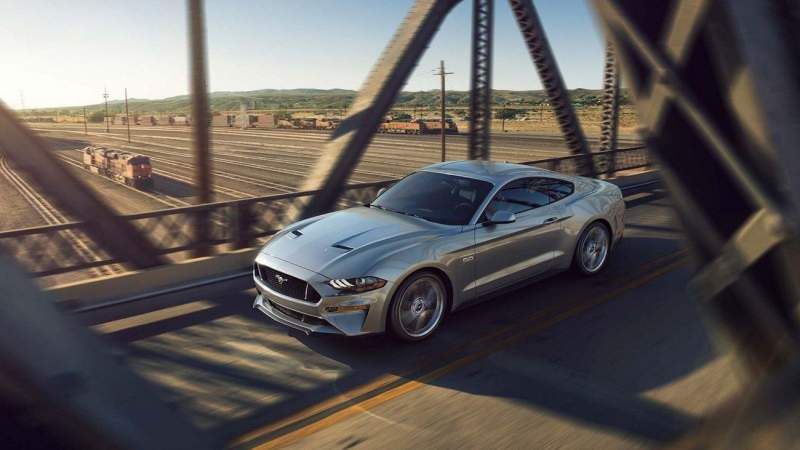