Under the Hood: 2017 Chevrolet Malibu

The auto industry may be obsessed with making crossovers and SUVs, but that doesn’t mean they’ve stopped focusing on sedans. Consumers still go crazy over them, especially mid-size sedans. In this crowded segment, the Chevrolet Malibu was the strongest sales gainer in 2016, with total sales jumping 16.9% to 227,881 units. That was good enough for fifth place for the year.

It’s easy to see why consumers like the Malibu. It looks good and is priced right. It packs a ton of tech and safety features, and there’s even a hybrid model. If you’re in the market for a mid-size sedan and are considering the Chevrolet Malibu, here’s what you need to know.

The Malibu Was Completely Redesigned In 2015

Chevrolet debuted the current-gen Malibu at the 2015 New York Auto Show. While there were major updates to the sedan inside and out, the most noticeable change from past generations was the car’s look. The new Malibu was designed to be much more upscale with its tight lines and fastback(ish) profile. Higher trim levels further enhance this image with squared dual exhaust ports and LED lights.

Chevy redesigned the Malibu’s interior completely with a new dashboard and center stack. The result is a cabin that looks less cluttered. The center console has less buttons and the dashboard is no longer bisected by what looks to be — but isn’t — an air vent. A seven-inch touchscreen is now standard on all models, save for the entry-level L trim. Unlike in the previous Malibu, the screen is raised not recessed, giving it a modern look. The gauge cluster has also been given a slick new design and the steering wheel can now be equipped with many more buttons, although not all drivers may see that as a good thing.

Overall, the current Malibu is longer than the model it replaced but not wider. The result is a roomier cabin and a car that doesn’t look any bulkier for it. There’s 38.1 inches of rear legroom, which is better than average. All that legroom eats into the trunk space, though, as the Malibu only offers 15.8 cubic-feet of storage space, which is average for the segment.

The Malibu has a five star overall crash test rating from the National Highway Traffic Safety Administration. A whopping 10 air bags are standard, and up to 11 safety aids are optional. These include features such as forward collision alert, lane keep assist, and blind spot monitoring. Then there’s Teen Driver, a mode which allows parents to limit the stereo volume and max speed when teens are behind the wheel. One thing to note is that not all Malibu trims can be optioned with these safety features.

The Malibu is front-wheel drive only and is offered with two gasoline engines. The base engine is a turbocharged 1.5-liter four-cylinder making 163 horsepower and 184 lb-ft of torque. It’s mated exclusively to a six-speed automatic transmission. That engine is the only option on the L, LS, and LT trims. If you want something more powerful, you’ll need to opt for the Malibu Premier powered by a turbocharged 2.0-liter four-cylinder. That engine makes 250 horsepower and 260 lb-ft of torque, and is paired with a nine-speed automatic transmission.

The Malibu is underpowered for its segment, and that’s because the sedan is more about practicality than performance. The 1.5-liter engine in the 2017 model gets an EPA estimated 27/36/30 (city/highway/combined) mpg. The 2.0-liter engine returns figures of 22/33/26 mpg. Those numbers make the Malibu one of the most fuel-efficient cars in its class.

There’s A Hybrid Malibu Too

Speaking of good gas mileage, the hybrid Malibu returns an mpg split of 49/43/46. It’s powered by a 1.8-liter four-cylinder engine paired to a 1.5-kWh battery pack, with the gas and electric engine combining to make 184 hp. The only transmission on offer is a CVT that features a manual shifting mode for those who want to pretend like they’re driving a standard. While the Malibu Hybrid isn’t designed for performance, Car and Driver called it a “pleasure to drive” in its review.

The biggest knock on the Malibu Hybrid is its tiny trunk. Chevy chose to put the battery back there which reduces the trunk to around 11 cubic-feet of space. The hybrid’s other glaring issue is its lack of pure electric range. Since the battery pack is so small, there’s only enough power for less than five miles of all-electric driving. Those are small issues, though. The Malibu Hybrid is one of the most fuel-efficient hybrids in its class, it looks great, and it’s priced competitively with an MSRP of $28,750. 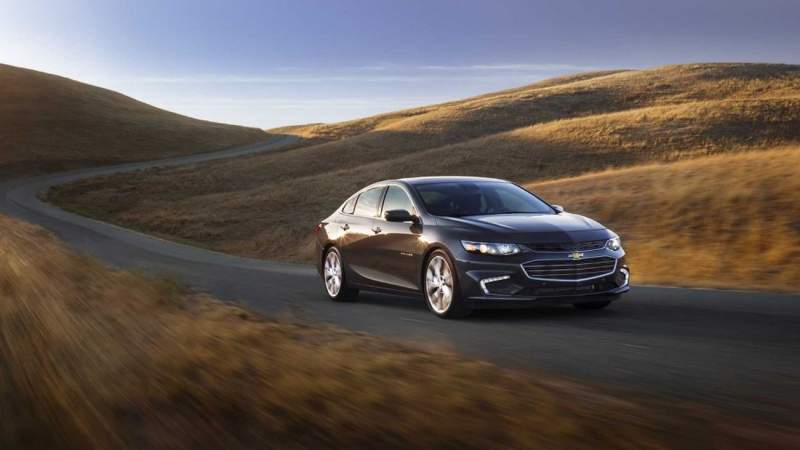 The L is the cheapest of the five Malibu trim levels with an MSRP of $22,555. It is the only trim level to not offer a touchscreen and it lacks general refinement overall. The smarter move is to spend a bit more on the Malibu LS. The LS starts at $24,100 and comes standard with more tech, like a seven-inch touchscreen, built-in WiFi hotspot, and Android Auto and Apple CarPlay compatibility.

At $26,000, the LT is the mid-level Malibu trim level. It comes with all the tech of the LS, but offers swankier standard exterior features, including heated side mirrors and 17-inch aluminum wheels. There are a handful of packages available for the LT, including the safety-focused Driver Confidence Package which adds features like front and rear park assist, forward collision alert, and low-speed front automatic braking.

With an MSRP just under $30,000, the Malibu Hybrid is perhaps the best buy. It doesn’t have as many standard luxury features as the top-tier Premier trim but it still comes standard with a seven-inch touchscreen, eight-way power adjustable driver’s seat, and dual-zone climate control.

If luxury is your goal — and if you’d like a bigger engine — then the Malibu Premier is the model to target. It’s the only trim that can be had with the 250 hp 2.0-liter turbocharged engine and nine-speed automatic transmission. Standard features include heated front seats and a heated steering wheel, leather interior, and remote start. On the tech front, there’s an eight-inch touchscreen, wireless charging pad, and Bose nine-speaker audio system. With a starting price of $31,850, the Malibu Premier is not cheap, but you certainly get what you pay for.

How It Compares to The Competition

The Chevy Malibu is a solid mid-size sedan that’s not quite at the top of the pack yet. It gets high marks for its exterior design, smartly appointed interior, and tech. However, it’s still low on the power front when compared to just about every other offering out there. It’s lacking a V6 and all-wheel drive may be an issue for some as well. But those are mostly subjective complaints.

Not every driver wants to shift their own gears, but Honda makes a manual Accord for those who do. Some consumers could not care less about sportiness, but Ford makes the 325-horsepower all-wheel drive Fusion Sport if you do.

Two big things to consider are the 2018 Honda Accord and 2018 Toyota Camry. Both have been completely redesigned inside and out. The Accord’s new look is a bit polarizing and it’s no longer offered with a V6, but it does have tech that’s not even available on an Acura yet. Meanwhile, Toyota has been hard at work ensuring that the new Camry is more Neapolitan than vanilla. The sedan is available with a 3.5-liter V6 making a whopping 301 horsepower. Honda is waiting until fall of 2017 to release the new Accord, but the Camry is available now.

If you want the newest mid-size sedan on the market, Honda and Toyota are where to look, at least right now. But if you’re looking for a fuel-efficient car that’s a good value and stylishly designed inside and out, the Chevrolet Malibu won’t disappoint. 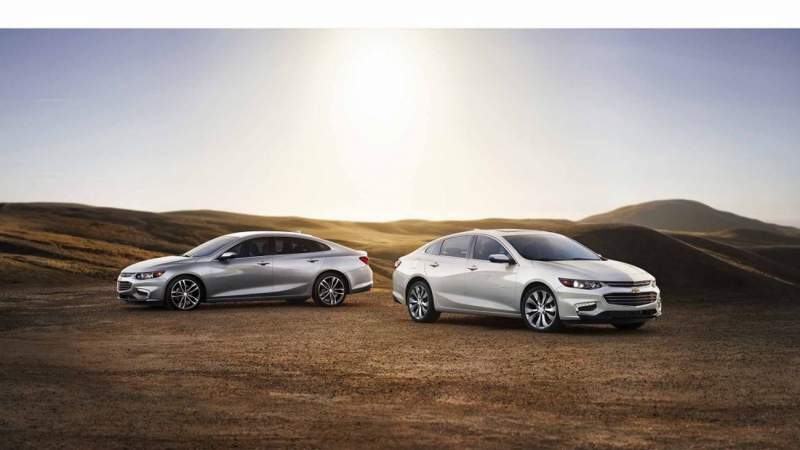