If you’re a luxury car lover, the 2020 model year should trigger a great deal of excitement. While some models are engineered to deliver a thrilling performance, others are built to offer the ultimate degree of passenger comfort. These new rides will also offer a wide range of cutting-edge technologies, including hands-free driving aids.

Without further delay, here are the top luxury cars of 2020.

Most drivers will be completely satisfied with the base turbocharged six-cylinder engine. It develops a fulfilling 335 horsepower while returning up to 29 mpg. On the other hand, a 523-horsepower output enables the twin-turbo V8 engine to deliver more driving excitement. Although the hybrid model is built for efficiency, it still manages to produce an enjoyable 389 horsepower. Under the hood of the mighty M760i model sits a 600-horsepower 12-cylinder engine.

A lot of exciting technology is available for the new 7-Series. Voice assistant software enables you to verbally command the car to perform certain functions. Several advanced safety technologies are offered as well. Designed to reduce driver fatigue in congested cities, Extended Traffic Jam Assistant enables the 7-Series to essentially drive itself at low speeds.

Over the last few years, class-leading warranty coverage and a laundry list of standard features have helped the G90 to remain a standout value. Expect the redesigned 2020 Genesis G90 to better compete against its European rivals. You’ll love the new G90’s improved interior and more upscale styling. Expect the new G90 to be just a bit more expensive than the current model, which has a starting MSRP of $69,395.

Genesis decided to carry over the G90’s engine lineup. While the standard twin-turbo V6 engine packs a competitive 365 horsepower, the optional V8 engine develops a more muscular 420 horsepower. Both engines are mated to an eight-speed automatic transmission. A standard adaptive suspension system aids the sedan’s smooth driving dynamics. Don’t expect a big change in fuel economy. EPA estimates for the 2019 model stand at 17 mpg in the city and 24 mpg on the highway.

Upgraded materials are found inside the new G90, including quilted Nappa leather upholstery and natural wood trim. The interior controls have also been simplified for easier use. While the 2020 Genesis G90 features the same 12.3-inch infotainment display, it now boasts sharper graphics and quicker response times. Meanwhile, a new Intelligent Car Management Service uses advanced technology to keep tabs on the sedan’s maintenance needs. Many drivers will be interested in the new Blind-Spot View Monitor, which shows a camera view of the sedan’s blind spots.

Toyota has not produced a high-performance sports car since the 1990s. For good reason, the all-new 2020 Toyota Supra has generated a great deal of excitement. With an estimated starting price of around $50,000, the Supra is poised to become one of the hottest vehicles of the year. Only two main trims will be offered: 3.0 and 3.0 Premium.

Powering this rear-wheel-drive coupe is a turbocharged inline six-cylinder engine. According to Toyota, it will generate a pleasing 335 horsepower and 365 pound-feet of torque. Unfortunately for the drivers who love shifting gears, an eight-speed automatic gearbox will be the only available transmission. On the bright side, standard launch control technology will ensure powerful acceleration. A zero to 60 time of 4.1 seconds makes it the quickest sports car in Toyota’s storied history. This means the Supra can easily compete against the more expensive Porsche Cayman and the Jaguar F-Type.

Mercedes-Benz vehicles are typically on the expensive side. Drivers who aren’t looking to spend big bucks should check out the redesigned 2020 Mercedes-Benz CLA-Class. This compact luxury sedan is anticipated to have a starting price of less than $35,000. You’ll enjoy the CLA-Class’ coupe-like styling and lively performance. While the new CLA-Class is indeed more affordable than the average German luxury car, it does not sacrifice any quality. Some of the primary competitors include the BMW 2-Series and the Acura ILX.

Powering the new CLA-Class is a boosted four-cylinder engine. Mercedes-Benz tuned it to develop 221 horsepower and 258 pound-feet of torque. A seven-speed automatic transmission is found throughout the lineup. With a zero to 60 mph time of 6.3 seconds, the CLA-Class is quick enough to ensure a fun morning commute. Fuel economy should at least match last year’s rating of 24 mpg in the city and 37 mpg on the open road.

While the 2020 Mercedes-Benz CLA-Class isn’t big on the inside, it provides impressive front-seat comfort. You’ll also be surrounded by the automaker’s latest technologies. Instead of a traditional gauge cluster, the CLA-Class features a pair of 7.0-inch digital screens. However, larger 10.25-inch screens are optional. Drivers will also enjoy the Mercedes-Benz User Experience infotainment system, which recognizes natural-language commands. Available as an option, the Driver Assist Package transforms the CLA-Class into a smarter car. With the help of camera and radar functions, it’s able to actually adjust your speed around curves.

In the land of world-class performance cars, the Porsche 911 has long stood atop the mountain. However, expect the redesigned 2020 model to offer a better driving experience at the track and on the street. While the base Carrera S model may have a high MSRP of $113,300, very few sports cars prove to be as versatile.

The performance will obviously be a strong point for the new 2020 Porsche 911. Motivation comes from a powerful flat-six engine. A redesigned turbocharger and improved intercooler help increase production to 443 horsepower. Zero to 60 mph flies by in a scorching 3.5 seconds with the standard PDK eight-speed automatic transmission. However, Porsche will offer a seven-speed manual gearbox later in the model year. Handling will be as good as ever. Updated adaptive suspension dampers and a wider body help the legendary coupe to stay balanced around corners. Porsche Stability Management provides a greater sense of control. While the EPA has yet to evaluate the new 911’s fuel economy, some car reviewers have averaged a solid 23 mpg.

On the inside, the new 911 has the look and feel of a classic Porsche sports car. However, there’s no ignoring the car’s new technology. A new 10.9-inch touchscreen gives the interior a more luxurious character. Meanwhile, Porsche Entry and Drive eliminates the need to take the keys out of your pocket. 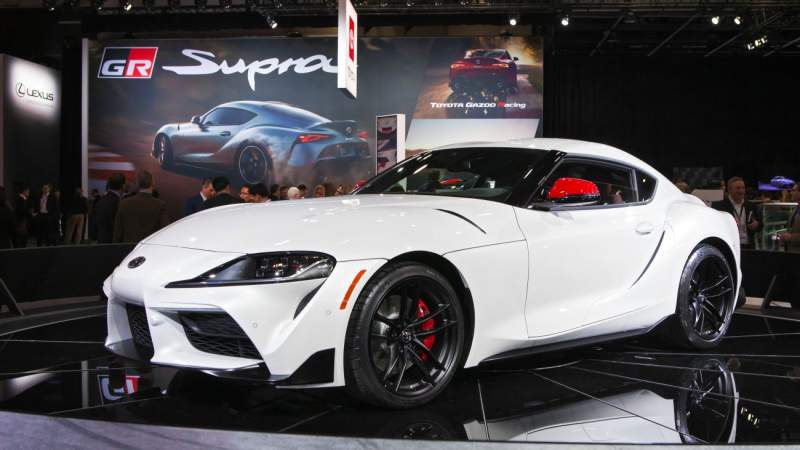