The Insurance Institute for Highway Safety (IIHS) is one of the top vehicle safety rating agencies in the United States. They recently came out with its “Top Safety Pick” awards for all 2016 model vehicles. As always, the picks have generated some heated debate in auto circles. However, if you are the kind of driver who factors in safety when choosing a vehicle to buy, the IIHS ratings are like scripture. Here is a list of the 2016 model vehicles that the IIHS has rated as among the safest to drive.

It’s not a particularly flashy car. The Kia Optima isn’t known for its speed and torque. However, it did earn top grades for safety and reliability. Not only did the vehicle score well on IIHS’s various crash tests, but it has been lauded for its optional front crash prevention system. That feature is industry leading and ahead of the automotive pack.

“The new model’s ratings are an improvement over the 2015 Optima, which earned only an acceptable rating,” said the IIHS in awarding the 2016 Optima its highest safety accolade. The redesigned 2016 Kia Optima also features a forward collision warning system that is state-of-the-art.

Anyone in the market for a compact car should consider the 2016 Mini Cooper. It too has earned the IIHS’s top award for overall safety. In praising the newest model of the Mini Cooper, the IIHS noted that the 2016 model has dramatically improved the side curtain airbags. Those, in turn, have increased the overall protection for people seated in the rear of the car.

This improvement came after the 2014 Mini Cooper failed a government mandated side test, resulting in a recall. The IIHS also noted that the 2016 Mini Cooper avoided a collision in three out of five runs at 12 miles per hour, and at 25 mph its impact speed was cut by an average of 7 mph. The 2016 Mini Cooper also has an advanced forward collision warning system built-in.

Audi isn’t as well-known for its SUVs, but the redesigned Q7 earned high praise from the IIHS. The latest model is distinguished by front and side air bags throughout the vehicle, which make it extremely safe during a crash. The IIHS also noted that it “doesn’t routinely test large SUVs. The Q7 is the first to be put through the challenging front crash test. The Q7 was tested because Audi nominated it for Top Safety Pick and paid for the vehicles used.”

Audi is clearly banking on the Q7 to help the company be more competitive in the SUV space. Having achieved the highest safety rating from the IIHS will certainly help that goal. Motorists who are in the market for a large SUV that comfortably seats seven people should definitely consider the Audi Q7.

Another SUV to make the IIHS safety grade is the Toyota Highlander. The 2016 model earned a Top Safety Pick, as did the 2015 Highlander. However, the IIHS noted in its review of the new Highlander that Toyota made several structural modifications to the current model that improved its overall safety rating and reliability.

The Honda Civic is a tried and true sedan that has been a top-selling vehicle in North America for more than 25 years. The 2016 Civic was redesigned by Honda and the IIHS praised the redesign as helping to boost the car’s safety. The IIHS noted that the criteria used to achieve their Top Safety Pick designation was tightened for the 2016 model cars, but the Civic still passed with flying colors. That is great news for anyone who has been driving Honda vehicles. The Civic remains a reliable — and safe — four-door family sedan. It’s 2016 Top Safety Pick award is just another reason to stick with Honda.

Another stalwart car in terms of safety and reliability is the Hyundai Sonata. The 2016 model has achieved the IIHS Top Safety Pick designation in the midsized car category. The award is largely owing to its front crash prevention system and reliable air bags.

However, the IIHS did issue a qualifier on the 2016 Sonata, stating that: “In the case of the Sonata, the improvements were made after production for the 2016 model year had already begun. The award only applies to Sonatas built after October. Consumers can find a vehicle’s manufacture date on the certification label typically located on or near the driver door.” Still, if safety is a concern, the Hyundai Sonata is a vehicle people can trust in the event of a collision or crash. Just try to buy one made after October.

In terms of midsized luxury SUV, the Lexus RX takes top prize for safety. In fact, during crash tests the Lexus RX managed to avoid collisions altogether when traveling at 12 and 25 mph, respectively. The collision warning system on the RX was found to be superior to most other vehicles in the same class.

The roof strength on the Lexus RX, as well as the durability of the seats and head restraints and their ability to withstand a crash, were also praised by the IIHS. Other safety features on the Lexus RX include anti-lock brakes, electronic stability controls, side airbags, and a rollover sensor.

The midsize Nissan Altima received the Top Safety Pick designation from IIHS for both 2015 and 2016. However, when it comes to the 2016 Altima, the IIHS noted that the car “…avoided a collision at 12 miles per hour, while in the 25 mile per hour test its impact speed was cut by 10 miles per hour.”

The Altima also received a superior score for its front crash prevention system. It’s equipped with both front and rear head curtain airbags. There’s also front seat-mounted torso airbags that provide a higher level of protection than many other vehicles of a similar size.

Protection during side collisions was also superior in the new Altima, says the IIHS. These results prove that the car’s reputation for safety over the years has been well-deserved. No wonder the Altima has been the Nissan’s flagship vehicle for nearly two decades.

Swedish automotive giant Volvo continues to impress with its V60 luxury wagon. This stylish vehicle earned the IIHS’s Top Safety Pick award after performing well across the board in crash tests. The 2016 model comes equipped with all the latest safety features one would expect in a modern Volvo. This V60 includes anti-lock brakes, daytime running lights, electronic stability control, and a full complement of airbags.

However, the V60 also boasts a rollover sensor that deploys side curtain airbags in the event of an impending crash. The child seat anchors in the Volvo V60 were cited for their ease of use. The halogen headlights gave off great light at night. All and all, the Volvo V60 has proven itself to be a safe choice for both driver and any passengers.

Not many 2016 minivans received an IIHS Top Safety Pick designation. The 2016 Kia Sedona was the only other vehicle in this class to receive the award. The Honda Odyssey was also singled out for its durability and resilience when put through a rigorous battery of crash tests.

The only knock on the Honda Odyssey is with its front crash prevention system, which received a “basic” designation. However, the Odyssey was praised for providing superior safety to occupants in the back seats, as well as for its roof strength and ability to absorb a side collision. All of that is super important for a vehicle likely to be transporting families around.

Overall, the Odyssey remains top of its class in terms of safety. Not only that, but it also offers a great driving experience and comfort for the whole family. That comfort comes with the peace of mind that the vehicle is safe in the event of a disaster. 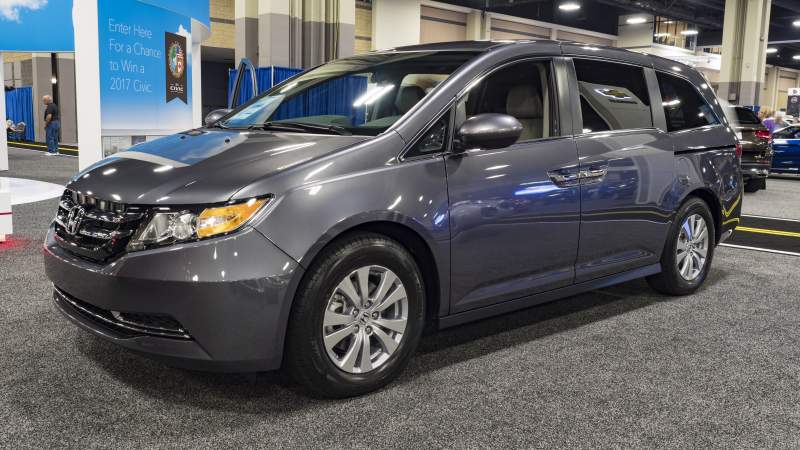