The Most Iconic Sedans Of All-Time

Sedans have largely fallen out of fashion these days in favour of SUVs and trucks. In fact, some automotive companies like Ford have stopped manufacturing sedans altogether due to declining sales. However, it’s important to remember that the sedan was the original car.

While not terribly sexy or sleek, sedans were dependable vehicles that could get you where you were going without costing too much in gas. The term “family car” was first applied to a sedan, after all. We all instantly recognize a sedan. Most of us grew up riding in sedans, or even owned one ourselves. While they may eventually disappear altogether, here is a list of the 10 most iconic sedans of all-time.

We’ll start this list with one of the big boys on the block – the legendary Chevy Impala. For people who enjoy a larger sized car, it doesn’t get much better than this full-sized sedan. This car has the advantage of being both large and good on gas. In general, the Chevy line of vehicles have come a long way in recent years in terms of their durability. The days of the Chevy clunker that is constantly breaking down and costing big bucks in repairs seem to be gone.

At a starting price today of about $25,000, the Impala continues to be one of the more affordable full-sized cars. It continues to win praise for its overall low cost to operate. Insurance, gas, and maintenance costs are all relatively low. That makes it an attractive option for people who want plenty of leg room and trunk space in a full-sized vehicle. While some people label the Impala an “old man car,” we think that term is unfair.

Hard to believe, but Ford has discontinued its beloved Taurus, one of its most iconic sedans ever made. The Taurus has been on the market for more than three decades and gone through six generations. The Taurus was manufactured by Ford in the U.S. from 1986 to 2019. In all, roughly 7.5 million Taurus sedans were built.

Today, the Taurus stands as the fifth best-selling Ford nameplate ever, only surpassed by the F-Series, Escort, Model T, and Mustang. Between 1992 and 1996, the Taurus was the best-selling car in the United States. However, its illustrious history could not save the Taurus from being discontinued by the bean counters in Detroit. Four consecutive years of declining sales and only 38,000 models sold in the U.S. in 2018 put this iconic sedan on the corporate chopping block. Hard to believe.

What can you say about the ever popular and super trustworthy Honda Civic? This is one of the most popular cars in the world today. Much of that is the result of the Civic acting like the Energizer Bunny of cars. It just keeps going and going. Many Civics boast 300,000 or more miles.

Honda continually redesigns and improves the Civic, upgrading the engine on a regular basis and offering a touring editions of the car. The result is usually car that is even more comfortable than previous incarnations and handles nicely too. With advanced safety features such as a blind-spot monitoring system, it is hard to go wrong with a Civic. As with other Honda models, the Civic is a car with staying power.

Moving into the luxury sedan segment, we have the venerable Audi A5. Billed as an affordable luxury car, current Audi A5 models have a starting price of under $40,000. That’s a decent price considering the A5 has a reputation for being sturdy as a rock. It comes with luxury features that people expect, such as all-wheel drive and a turbocharged and direct-injected 2.0-liter turbo engine that produces 220 horsepower. It also gets 22 miles per gallon in the city and 32 MPG on the highway in terms of fuel economy.

Despite its size in the past — it has been called a “boat” for good reason — and popularity among older people, there is no denying that the Lincoln Continental is an iconic sedan. It’s reputation as a gas guzzler from the 1970s has not stopped the Continental from enduring.

Today, the Continental is known as a midsize luxury car that comes with all the trappings of such a vehicle. It boasts leather interior, top-of-the-line safety features, and comfort galore. In production for over 55 years across nine different decades, Lincoln has produced ten generations of the Continental and counting. In fact, the Continental has the distinction of being the very first “personal luxury car” produced by an American automotive manufacturer. Say what you will, but this is an iconic sedan in every way.

Like the Impala and Continental, the Buick Regal takes some stick for being uncool and overly popular among seniors. However, these criticisms are not warranted. Yes, this is a Buick. But the Regal is a critically lauded sporty sedan that automotive journalists and industry insiders consider among the top of the heap when it comes to sedans.

Available in all-wheel drive and with a stick shift, the Regal is super fun to drive. Its design elements, particularly the interior, have been highly praised as sleek and sexy. A base price of only $30,000 gets you many impressive add-ons, notably a leather interior, a Wi-Fi hotspot, and OnStar driver assist. Trust us when we say that this is not your grandfather’s Buick. The Regal is an icon among sedans and worth a look.

For a sturdy and reliable sedan, look no further than the Toyota Camry. This is one of those iconic cars that people keep forever – literally. If you’re someone who likes to keep your car for a really long time, and wring every ounce of investment you can out of it, then you can’t do much better than a Camry.

Comfortable and precise, the Camry is like your dependable best friend. The car will never steer you wrong. The handling is secure and superior. The 2.5-liter, four-cylinder engine is rock steady and delivers plenty of power and pick-up.

The Camry is also available in a hybrid version that gets a massive 38 MPG fuel efficiency overall. If all this weren’t enough, the Camry is also a top resale vehicle and holds its value extremely well – even with 200,000 miles on the odometer. People know that a well-used Camry likely has another 200,000-miles under the hood. Vintage!

Another iconic luxury sedan is the Lexus ES. Like most of the other sedans on this list, the ES has built its status on the fact that it provides its owner with years and years of stress free driving. Of course, this vehicle comes with all the luxuries that people expect in a Lexus. It has a gorgeous interior, state-of-the-art touchscreen infotainment system, and top-end safety features.

It’s also solid as a rock and can take on 300,000 miles plus and keep on ticking. People who splash out on a Lexus ES needn’t worry about expensive costs to replace Lexus parts. The engine and mechanical components on this car are well crafted and last. Owners of the Lexus ES can look forward to driving around in luxury for many years to come.

A Porsche 911, this definitely ain’t. However, the Toyota Corolla makes the list for being the ubiquitous family sedan. A global best seller for more than 40 years, the Corolla is a small car that has had a big influence. If you’re looking for a reliable, fuel efficient car that is perfect for driving kids to the baseball diamond or getting to-and-from work, you need to consider the Corolla.

Introduced in 1966, the Corolla has endured through the generations. More than 40 million units have been sold to date. Reliable, comfortable, and fuel efficient, the Corolla has proven that a car needn’t be flashy to be popular. Toyota calls the Corolla its “world car” and has said it will never stop producing the vehicle. That makes it one of the most impactful sedans ever.

It’s a little smaller and a lot stranger looking than the other cars on this list, but technically the Volkswagen Beetle is a sedan. It remains one of, if not the most iconic cars ever made. While Volkswagen recently discontinued production, the Beetle has been around (on and off) since the 1940s . It was originally built during World War II, and has even been the subject of movies like The Love Bug. The Beetle has fan clubs the world over.

The VW Beetle was a symbol of German resilience after WW II. It became an emblematic symbol of the baby boomer generation. It was revived in the late 1990s, with a model that featured a built-in flower vase – an ode to the car’s hippy 60s heyday.

Sadly, U.S. consumers looking for a small Volkswagen vehicle overwhelmingly prefer the Jetta sedan or a Tiguan compact SUV. So the company has pulled the plug on Bug production. That’s too bad, because neither of those vehicles have proven to be as popular or iconic over the years as the instantly recognizable Beetle. Rest In Peace. 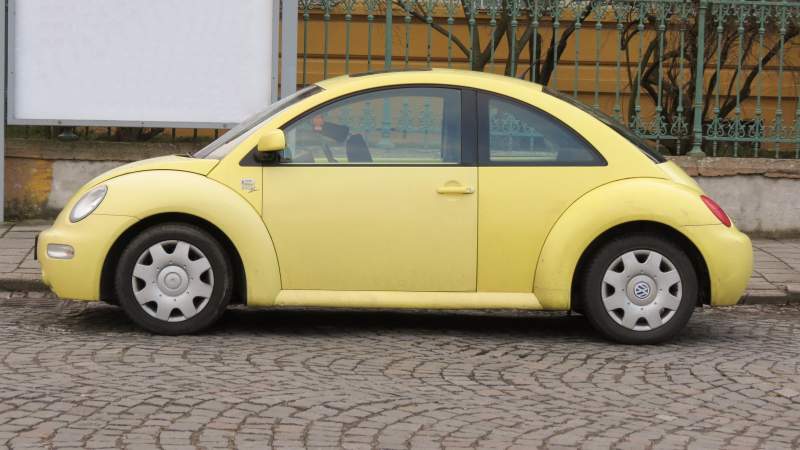