These days, the SUV is King of the Road. A growing number of drivers are opting for SUVs in favor of traditional sedans. The attraction to SUVs appears to relate to their size, comfort, and safety features. Vehicle manufacturers have responded with a growing number of high-end SUVs. Many of them are increasingly hybrids or fully electric models, eliminating the complaint that these rigs are gas guzzlers.

That sort of comfort and convenience come at a price. As SUVs become more popular and state-of-the-art, they are also becoming more expensive. If you have the money to spend though, then you may want to consider one of the following vehicles. They are amazing vehicles, to be sure. But they are also ten of the most expensive SUVs on the market today.

Note: For most of these, we’re talking about the top trim levels of their respective models.

This is the top end SUV made by Ford, which is reflected by the starting cost of $78,865. For that price, you get a large and roomy SUV that is loaded with luxury features. These range from a panoramic sunroof to an onboard WiFi hot spot that can support up to 10 wireless devices.

Under the hood, the Expedition Platinum has a twin-turbo 3.5-liter V6 engine that pumps out 400 horsepower. It comes coupled with a new 10-speed automatic transmission. That makes this SUV ideal for both highway driving and scaling a mountainside. The Expedition is also notorious for being one of the biggest vehicles on the planet.

Inside, there is space to seat eight adults comfortably (and we do mean comfortably). The third-row seat can be folded down with the push of a button to provide additional cargo space. If all that weren’t enough, consider that the Expedition Platinum can tow up to 9,300 pounds with ease. Not surprising that this rig has been named both “Best Large SUV” and “Best SUV for Families” by several automotive publications.

More in the off-road category is the Toyota Land Cruiser. This SUV has long been a favorite of weekend warriors and adventurers. This is because the Land Cruiser was originally designed as a military vehicle back in the 1950s, and has gradually evolved for use by civilians. However, it has retained its reputation for being reliable and tough on dirt roads and gravel.

This is the SUV to get if you literally want to go off the beaten path with a true all-terrain vehicle.It’s powered by a 381-horsepower V8 engine, which helps ensure the Land Cruiser’s reliability in any location. This large SUV is also roomy, with seating for up to eight people and a cargo area that provides 82 cubic feet of space with the second- and third-row seats folded down.

However, this SUV is not known for having great fuel economy. The one downside to the Land Cruiser is the amount of gas it burns through, hitting your wallet hard. Then again, if you’re plunking down $85K for a beefy SUV, maybe you’re not concerned about the price of fuel. Either way, the Land Cruiser is still lots of fun to drive.

The Porsche Macan Turbo is one of the smaller SUVs on this list. Actually, it’s the smallest SUV that Porsche manufactures. However, what it lacks in size and space, the Macan Turbo more than makes up for in terms of power, performance, and luxury. Think of this vehicle as the little SUV that could.

The Macan Turbo is propelled by a twin-turbo V6 engine that produces 400 horsepower. Throw in the “performance package” and the total horsepower hits 440. Impressive. The Macan Turbo is also all-wheel drive, which adds to its excellent acceleration and responsive handling.

While cargo space and rear legroom are a little less than other SUVs on this list, it helps to remember that the Macan Turbo drives a lot like a sports car. This is still a Porsche, after all. The Macan Turbo can literally hit 60 mph in 4.2 seconds, while still providing a ride that’s quiet, comfortable, and luxurious. Plus it costs under $90,000!

One of the big boys on the block is the Lincoln Navigator Black Label. This is the SUV that you see celebrities roll-up to red carpets in. Bodyguards are optional for us regular folk, of course. The Black Label is a full-size SUV in every sense of the word, and it comes chock full of luxuries.

The front seats alone can be power adjusted 30 different ways. Reviewers have called the seats among the very best available in the full-size SUV market today. Like all Navigators, the Black Label is powered by a twin-turbo 3.5-liter V6 engine that delivers 450 horsepower. Four-wheel drive is standard in the Black Label models, as is an extended wheelbase.

The interior of the Black Label is outstanding t00. All the materials are extremely high quality, and the overall design shows Lincoln knows how to build a top-notch SUV cabin. There is room for eight people to stretch out and enough cargo room to carry everyone’s luggage. This SUV is actually a steal at $97,405.

Coming in just under $100,000 is another monster SUV, the Cadillac Escalade ESV Platinum. This is a classic Cadillac vehicle and provides both size and comfort. Fully equipped at its top trim level, the Escalade can seat eight people and can tow 8,300 pounds. That’ll get the boat to the dock and back.

The towing ability comes courtesy of a V8 engine that revs 420-horsepower. Coupled to four-wheel drive and a new 10-speed automatic transmission, the Escalade ESV Platinum can really haul. There is also extra room for third-row occupants and an abundance of cargo room. Interior luxuries include front seats that are both heated and massaging, as well as an infotainment system that has been praised as one of the best in the industry. We could say more, but it might be best to test drive one of these for yourself.

For just under $105,000, you can get into the Volvo XC90 hybrid model. It’s one of the most luxurious SUVs on this list. However, it’s definitely aimed more at wealthy patrons than outdoor enthusiasts. Volvo is marketing the XC90 hybrid squarely at business executives and one-percenters who are more likely to use this SUV in the city than the country.

To prove our point, consider the following: there’s a rear beverage cooler that includes a pair of crystal glasses. Need we say more? How about the fact that all four bucket seats in the XC90 hybrid are heated, ventilated, and have massage functions?

The plug-in hybrid powertrain, featuring an electric motor coupled with a four-cylinder engine that’s both turbocharged and supercharged, provides 400 horsepower. This Volvo can run solely on electric power for about 19 miles. All around, a very chic and stylish SUV.

Jumping up in price to $113,600, we come to the Range Rover Sport SVR. This is another superior SUV that provides both elegance and all-terrain ability. It looks equally good being valet parked or overlooking a gorge.

A supercharged V8 engine provides 575-horsepower, which gives the Range Rover Sport SVR an amazing amount of power and helps it to handle any terrain – even large rocks. However, this Range Rover is all luxury on the inside. Features worth bragging about include a 19-speaker Meridian audio system, tri-zone automatic climate control, voice activated commands, and soft leather covering the doors, seats, and dashboard . While the price may seem steep, those who own the Range Rover Sport SVR swear by it. This is an SUV that offers it all and then some.

Among the most luxurious vehicles on this list is the Mercedes-AMG GLS 63. Make no mistake, this is not an SUV for extreme sports or off-roading. The GLS 63 is a luxury SUV meant to impress within the confines of the city. Reviewers best describe the GLS 63 as being “refined” and “composed.” Given how great this SUV looks, it would really be a shame to splatter mud on it.

Nevertheless, the Mercedes-AMG GLS 63 does come equipped with a twin-turbo V8 engine that offers 577 horsepower, in case anyone wants to rocket down a highway. One drawback compared to some of the other models on this list is that the GLS 63 only seats seven people. It also doesn’t have quite as much cargo space as some of the larger options. Still, what room is available is spacious and adults can fit comfortably into the rear of the GLS 63, which remains one of Mercedes biggest SUVs. Awesome interior features include a Bang & Olufsen audio system, heated steering wheel, and a rear-seat entertainment system that comes standard. All yours for $125,300.

The all-electric Tesla Model X is not cheap. But if you believe Tesla CEO Elon Musk, the Model X is worth every penny. Not only does the Model X provide zero-emissions, it also has the iconic gull-wing doors that Tesla has become famous for. The P100D version of the Model X also gets Tesla’s “Ludicrous Speed” upgrade. That gives it enough acceleration to rival the world’s fastest supercars, notably Bugatti and Ferrari. Not bad for a vehicle classified as an SUV.

The Model X’s 289 miles of driving range on a single battery charge is among the best in the industry. Inside, the Model X is dominated by a large, central touch screen that is standard on all Tesla vehicles. The Model X also comes with “Autopilot,” the semi-autonomous driving system. The most advanced version of it not only automatically operates the car on roads, it will even park itself after the driver steps out at a destination. Really, you get a lot for the $140,000. It’s easy to fall in love with the Tesla Model X.

Taking a huge leap financially and hitting the $200,000 mark, we land at the Lamborghini Urus. While Lamborghini is more known for making supercars, it turns out that the company also knows a thing or two about SUVs.

Being a Lamborghini, the cabin is as stylish as the exterior, complete with soft leather and great scents. The starter button even rests under a small red flap in the center console, making starting the engine feel like launching a rocket. Who else but Lamborghini could get away with this? 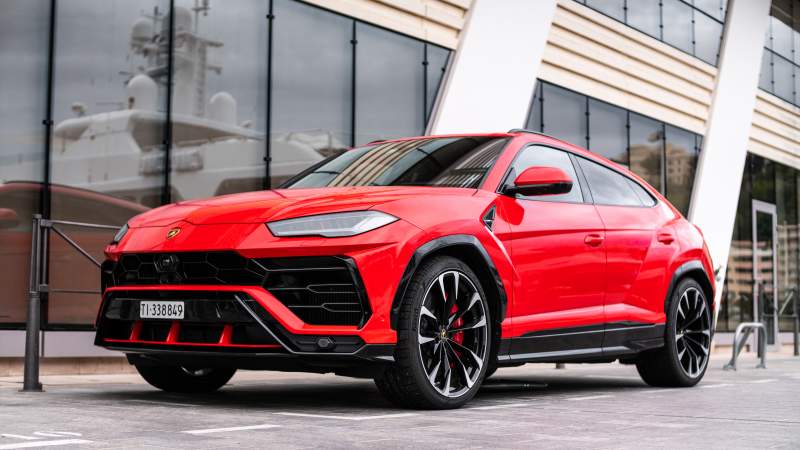