If money is no object, then you may want to consider purchasing a luxury car from a top end automotive manufacturer. You know, one that has all the bells and whistles. When money is not a consideration, you can buy some pretty sweet rides. Luxury car brands such as BMW, Mercedes, Audi and Bentley all make fantastic high-end vehicles for “one percenters” to purchase, cherish, and show off. For the rest of us, it is always fun to admire luxury cars that are out of reach for us financially and dream of a day when we may be able to afford such a car. Here are 12 of the finest and most expensive luxury cars on the market today.

If you’re going to drive a BMW, it might as well be a convertible. After all, a convertible just looks so much more fun to drive. That being said, the BMW M6 is one fine looking convertible. It also packs a punch with a V-10-powered engine and is able to hit 60 mph in only 4.6 seconds. It’s this combination of style and power that makes the BMW six series highly sought after by car lovers around the world. Of course, a BMW M6 is not cheap. A new one will run you a minimum of $79,500. With all the bells and whistles, you could be looking at as much as $100,000 to crawl into this beautiful car.

The Porsche 911 Turbo is a classic car. The current model of the vehicle is a true throwback, too. Designers at Porsche have purposely made recent 911s look like vintage versions from the past. However, under the hood (actually the rear bonnet) the newest Porsche is totally modern and updated. It starts at $105,000, which is a pretty penny. However, many Porsche aficionados still feel the current 911 is a real steal. While it may not be as powerful as a Ferrari or Lamborghini, the Porsche 911 still has plenty of pull. It remains a classic sports car that people covet and envy.

There can be no doubting the quality found in the Mercedes-Benz S600. At a starting price of $101,000, this sedan costs almost as much as an affordable condo (in some cities, anyway). However, the executives at Mercedes insist that the S600 is worth the price. The car is powered by a V-12 engine and has an upscale cabin, complete with mood lighting. Other features of this gorgeous car include massaging chairs, a perfume dispenser, and touchpad controls. The cabin is also completely handcrafted. Note that a totally tricked out version of this car will run you as much as $140,000.

Ah, Bentley. A brand of car that is synonymous with luxury. They don’t make anything cheap at all. While vintage Bentleys are highly prized by car collectors, the newer models are also proving popular. Case in point, the Bentley Continental GTC.

An elegant and stylish convertible, the Continental GTC is a true luxury vehicle. Outfitted with a motorized canvas roof, it is fun and easy to put the top down and take off down the highway. A starting price tag of $169,500 gets you features such as air-conditioned seats, a state-of-the-art voice activated infotainment system, and a stereo that has eight custom made speakers. If you don’t already own a Bentley, you should seriously consider picking one up. If you can afford it, that is.

The R8 is Audi’s foray into the exotic sports car market. Featuring a mod styling, the R8 boasts impressive handling and performance. You wouldn’t expect anything less from this legendary automotive company. Similar in power to the Porsche 911 Turbo, the R8 is actually considered a bit of a bargain luxury car priced at only $143,500. However, the car doesn’t look like bargain at all.

The large grille, mid-engine layout, and sporty interior will tell everyone that you’re driving a top of the line vehicle. A vehicle that is capable of driving extremely fast. Diamond patterned leather seats and a performance leather steering wheel with multifunction plus and two satellite control systems make people feel as though they’re piloting a real race car. Don’t forget the V10 engine that roars down the pavement.

Are we the only people who think of James Bond every time we lay eyes on an Aston Martin? Probably not. The Aston Martin V8 Vantage Roadster would certainly get the approval of 007. Very British looking and super fast, the Vantage Roadster starts at $149,995. For that money you get a car that will turn many heads on the side of the road.

A standout in any valet parking line, this Aston Martin is a high performing car that is also very modern and stylish looking. Armed with a V8 engine, it also has ergonomically designed everything inside the cabin. It’s often referred to as a “thoroughbred car” by the head honchos at Aston Martin. You can also grab it in a convertible model — for more money, of course.

For some people, Maserati is the brand in luxury cars. The Quattroporte, despite its awkward name, has proven to be a bestseller for the company. Considered a steal for many buyers at $100,000, the Quattroporte is viewed as an inexpensive Italian exotic car in most collectors’ circles.

Featuring a traditional automatic transmission, this car screams luxury from top to bottom. For the price, people get a V6 engine that delivers amazing torque and control. It also comes with dual cast brakes and an all-leather interior. The company refers to the cabin of the Quattroporte as a “lounge,” which should tell you all you need to know about the comfort and luxury of this car.

If you have an extra $180,000 to spend, then you might as well buy a Lamborghini Gallardo. This is the kind of car that you see on posters in dorm rooms. The Gallardo is extremely powerful and looks so unique that it is unmistakable as a Lamborghini. What else could it really be, with that iconic look?

A V10 engine allows people to go 0-to-60 in less than four seconds. The interior is a little sparser than some other vehicles on this list, but it still boasts leather seats, a touch screen infotainment system, and handling that is simply out of this world. A popular car among actors, musicians, and professional athletes, the Lamborghini Gallardo has to be driven to be fully appreciated.

A second Bentley makes this list — this time it is the Continental Flying Spur. This car has the distinction of being the top Bentley model, which is the brand that has helped to define the luxury car market for nearly half a century.The four-door Flying Spur is in the car collections of everyone from George Clooney to Paris Hilton.

Starting at $179,000, the Flying Spur can be customized in every imaginable way – right down to the exterior wood grain and interior leather seat pigmentation. Other notable features of this car include massaging seats, automatic climate control, and LED lighting. Optional features include a jewel encrusted gas cap. You know, if you’re into that sort of thing and $179K isn’t already a high enough price.

For almost $190,000, you can get yourself into the ultra-exclusive Jaguar XE SV Project 8, a car that is among the very finest money can buy. Priced at $187,500, the Project 8 comes with standard features such as a 5.0L V8 592 horsepower intercooled supercharger engine, 8-speed automatic transmission with overdrive, four-wheel anti-lock brakes (ABS), integrated navigation system, side seat mounted airbags, automatic air conditioning, 20 inch forged aluminum wheels, cruise control, and interior so nice you’ll think you’re sitting in the lobby of a luxury hotel. The infotainment system and technology in this car is reportedly out of this world. For the price, we would expect nothing less.

A steal starting at $217,000, the Ferrari F430 is considered an “entry-level” car by the Italian automater. However, there is nothing “entry level” about the salary you will need to be able to climb into this ultra cool convertible. The F430 is a mid-engine, paddle-shifting exotic sports car that exemplifies what it means to drive a Ferrari.

A V8 engine still produces plenty of power and torque, and the carbon fiber brakes are exceptional. This car rides on exclusive Goodyear Eagle F1 GSD3 EMT tires, and drives like a true race car. Stylish, classy, and convertible, the Ferrari F430 is the best car you can buy if you have a quarter-million to spend on your next vehicle purchase.

Rolls-Royce is a legendary brand that continues to impress. With models meant for royalty, Rolls-Royce epitomizes luxury sedans. None more so than the Ghost, which is priced at $265,000 (and up). For that price, you get a car that is large enough to justify a chauffeur. You also get impeccable detailing in the cabin, the latest state-of-the art navigation system and technology, and an engine so powerful that the Ghost (despite its ample size) can reach 60 mph in only 4.7 seconds.

This is the car to own if you truly want to impress the people around you, or have always dreamed of being driven to work in pampered luxury. Despite the steep purchase price, the Ghost is actually known for being very good on gas. All around, it’s one of the most impressive luxury sedans you can get. 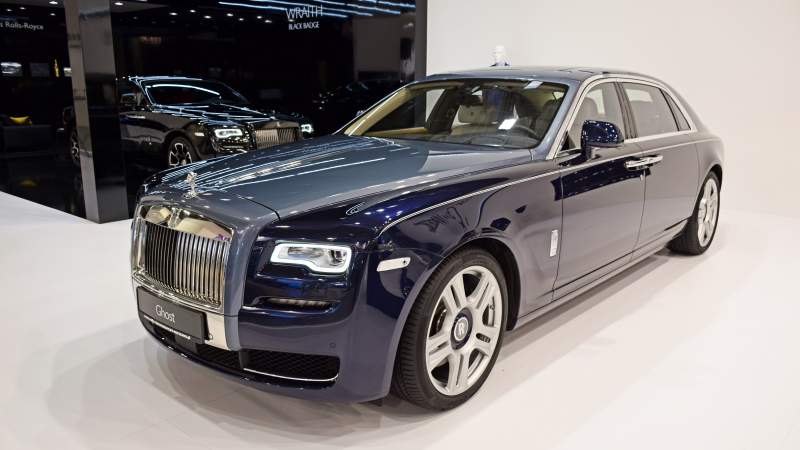