Cars have always been a status symbol. From the time the Ford Model T rolled off the assembly line, people have tended to define themselves by what vehicle they have parked in front of their house. For the ultra-wealthy, cars remain a symbol of opulence and prestige. After all, many of the wealthiest people in the world take to collecting expensive cars like children collect matchbox dinky cars.

In 2017, there are some extremely expensive cars for the super-rich to indulge in and purchase. Not a single vehicle on the following list costs less than $1 million. Are you curious to know what the 10 most expensive cars of 2017 are? Read on to find out…

Designed and built by German luxury car maker Apollo Automobil, the Arrow is a standout race car. And for $1.1. million, it had damn well better be something special. The German engineers behind this car promise that it will not disappoint – able to hit 60 mph in less than three seconds and boasting a twin-turbo V8 engine that produces 1,000 horsepower. Of course, the inside of the car is also pure luxury and decadence.

First unveiled at the auto show in Geneva, Switzerland, the Apollo Arrow had automotive critics drooling and sparked a flurry of advanced orders. You’ll want to place your order quickly, as Apollo Automobil has announced plans to only build 100 of these cars. Once the last one rolls of the assembly line, you can bet the price of $1.1 million will quickly jump higher.

God bless the Italians. In the history of automotive manufacturing, no one group of people has done more for the luxury sports car market than the land that gave us the Ferrari. The latest Italian automotive masterpiece to turn heads is the Mazzanti Evantra Millecavalli, priced at a cool $1.2 million. What makes this car so valuable?

Start with the light carbon fiber body, hand stitched interior, and seven liter twin turbo V8 engine that cranks 1,000 horsepower and can reach 60 mph in just 2.7 seconds. That’s literally like driving a rocket. With a maximum speed of 250 mph and a low slung design that makes drivers feel that they are part of the road, this Mazzanti is taking the luxury sports car to the proverbial next level. Oh, and did we mention that only 25 of these cars are being manufactured?

Speaking of Ferrari, the Italian automaker that celebrates its 70th anniversary this year is once again pulling out all the stops on its new convertible LaFerrari Apterra, priced at $1.4 million. Not only does this open top sports car have sex appeal to burn, but it’s also a performance machine that is also capable of reaching 60 mph in less than three seconds, but with a gas-electric hybrid engine under the hood.

That’s right, this Ferrari is powered by a 6.3 liter V12 gasoline engine that also happens to have a 120 kilowatt electric motor. Who would have thought that a sleek and sexy Ferrari could be driven by a hybrid engine? Of course, this isn’t your typical gas-electric hybrid engine. It is capable of producing 950 horsepower and torque to spare. With so much class and innovation, it is no wonder that all 200 models being made of this car have already sold out.

Believe it or not, Ferrari isn’t the only car manufacturer churning out hybrid models. For $1.5 million, you could get your hands on the Arash AF10 Hybrid, a supercar that has a light weight carbon fiber body and a completely innovative gas-electric hybrid engine. According to the company’s press kits, the Arash AF10 is capable of producing 550 horsepower with a 6.2 liter V8 engine.

However, rather than have one electric motor under the hood, this car actually has four. When all of them work together, this car enters what the engineers call “warp drive” mode, can crank out a staggering 2,080 horsepower, and hit 60 mph in 2.8 seconds. With that kind of power and speed, it is no wonder that this car comes with a fire extinguisher included in the interior.

You don’t normally think of Denmark when you’re discussing high priced luxury sports cars. However, smallish Danish automaker Zenvo is earning much acclaim among the glitterati for the impressive line of luxury sports cars it is churning out for super wealthy patrons. Case in point is the TS1, the latest cool set of wheels to be produced by Zenvo. With a price under $2 million, this vehicle is practically a steal.

For $1.8 million, buyers will get superior technology, comfort, class, and style all rolled into one. They’ll also get a V8 engine equipped with twin superchargers that can push 1,100 horsepower and reach a top speed of 233 mph without so much as breaking a sweat. Take note though, given the smaller size of TS1: the company is limiting production of the TS1 to only 15 models. This limited manufacturing run is no doubt helping to push up the price on this car.

Moving over to Sweden, let’s talk about the boutique automaker known as Koenigsegg. In 2017, the tiny Swedish company is manufacturing the Regera, a stylish though somewhat exotic looking sports car that is selling for the sizable sum of $1.9 million. The name “Regera” translates in English to “reign” or “rule.” People who shell out for this car will certainly be reigning over their respective neighborhoods Game of Thrones-style, as friends and foes alike will gawk at this beauty with pure jealousy in their eyes.

Like other cars on this list, the Regera is a hybrid. Its V8 gasoline engine is supported by three electric motors that can thunder out 1,800 horsepower and scare the crap out of anyone within distance to witness this car’s uncompromising speed. A total of 80 units of this car are being built, and word on the street is that they’re going fast… pun intended.

Making a big leap in price here (by almost $1 million) is the luxury Bugatti Chiron, a car that has been getting a lot of hype at auto shows around the world. Bugatti has placed what it calls a “W16” engine in the Chiron. What’s that, you ask? Well, it is like placing two V8 engines side-by-side and then joining them at the crank shaft. To say the Chiron is a powerful car is an understatement.

This Bugatti is capable of producing 1,500 horsepower and hitting 60 mph in a blurry 2.5 seconds. When not setting land a speed record, this car is also winning praise for its super comfy interior complete with a mineral spring water dispenser and foot massager. Who says you can’t combine style and performance in one vehicle?

A sports car that is probably more suited to the race track than a conventional highway, the Pagani Huayra BC is the ultimate boutique luxury vehicle. With only 20 models being manufactured and at a price of just under $3 million, this car is for a very select clientele. The “BC” in the name is a nod to famed car collector Benny Caiola, who is known for being extremely discerning when it comes to the vehicles he buys.

Aside from its name and exclusivity, the Pagani Huayra is also very lightweight and aerodynamic. The engine in the car has been supplied by Mercedes-Benz AMG. It is a six-liter twin turbo V12 engine expected to push 750 horsepower easily. This is great marketing on the part of Mercedes-Benz, which gets to play up its engineering work and association with a high-end, super exclusive vehicle.

What kind of a car will $3.4 million get you? Well, it’ll get you a Lykan Hypersport. Known as the “first Arab supercar,” the Lykan Hypersport is being produced by W Motors of Dubai in the Middle East. Only seven units of this vehicle are being made, making it a very rare car for people to own. Interestingly, the first Lykan Hypersport car was purchased by the Abu Dhabi police department, which now has the distinction of owning the fastest police car on planet Earth.

The other six cars are expected to be snatched up by some of the richest people in the Arab world. Naturally you will have to be very wealthy to afford diamond encrusted headlights and dashboard covered in rare gem stones – just a few of the perks of owning this car.

The title of world’s most expensive car for 2017 goes to the Aston Martin AM-RB 001, which is retailing for just under $4 million. A super race car that also happens to be legal for street driving, this Aston Martin was produced by the same team behind Red Bull Racing.

It has an ultra-light weight frame that flies along, thanks to a V12 engine and more than 1,500 horsepower. Plans are to produce 25 track-only versions of the Valkyrie, as well as 150 street versions. Sleek and cool, we have no doubt that this production run will attract buyers. Although let’s be honest, $3.9 million is a pretty penny to pay for any type of car. What would James Bond think? 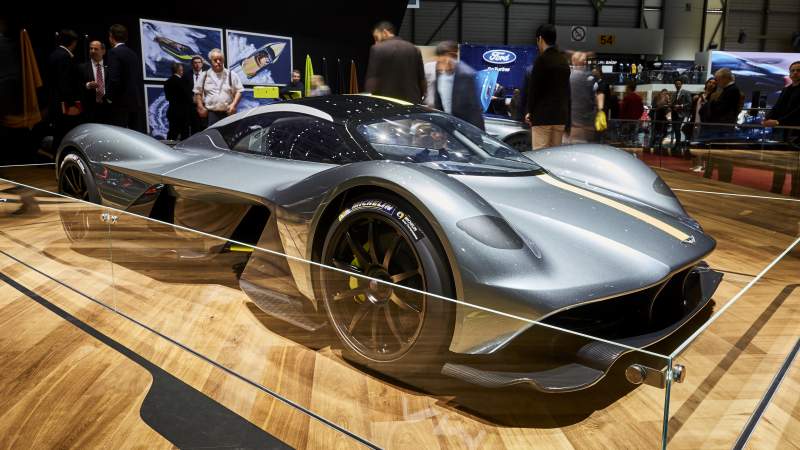