The Most Affordable Sports Cars You Can Buy Today

Coming in as the most affordable sports car at just under $25,000 is the Hyundai Veloster R-Spec. A performance package can be added to this car and the price will still come in at under $30,000. Now that’s good value. A 2017-or-older Veloster will cost you even less money, if you’re willing to go with a used one. Other reasons to consider the Hyundai Veloster, in addition to the price, are a strong base model engine that gets 147 horsepower, ten cubic feet of cargo space, and standard driver assistance features like forward collision warning and driver drowsiness monitoring. This car was recently named a “fan favourite” at the 2019 AutoFOCUS awards. At these prices, it’s easy to see why.

Only slightly more expensive is the Toyota M6, an impressive sports car that is priced well below the $30,000 mark. Standard features on the M6 (also known as the Toyota 86 Base) include 2.0L H-4 205 horsepower engine, six-speed manual transmission with overdrive, four-wheel anti-lock brakes (ABS), side seat mounted airbags, 17″ aluminum wheels, cruise control, ABS and driveline traction control, and electronic stability. If that weren’t enough, this car is a true racer. A real drift missile. Much loved by street racers from San Bernardino to Tokyo, the M6 is a really great sports car to get on a budget.

Okay, technically the Chevy Camaro is a muscle car. However, it’s still considered by many to be a sports car, and a highly collectible one at that. Despite it mighty history, reputation, and overall pedigree, the Camaro is a surprisingly affordable car. Most people are surprised to learn that you can get a brand-new Camaro for under $30,000. Mind you, that price won’t get you the Camaro that comes with a V8 engine. Even still, this is a Camaro we’re talking about. You can have a lot of fun with the standard V6 engine too. For right around $26,500, you can get into a nicely equipped Turbo or V6 Camaro that is paired with a standard six-speed manual transmission. It will still look like any other Camaro. This is a great deal anyway you look at it.

Ah, yes, the Mazda Miata. This sports car is quite literally the quintessential affordable roadster. When people think affordable sports car, the Miata comes to mind. That’s because the Mazda Miata has been one of the most affordable sports cars that anyone can own for more than 30 years. Back in the 1980s, the Miata sold like hot cakes. Yuppies couldn’t get enough of them. Today, a base model Miata starts at $26,650, making it a solid bargain by sports car standards. Even if you go for the convertible Miata in the highest trim level, this sports car will still cost you less than $40,000. This helps maintain the Miata’s reputation as an iconic cheap sports car.

People love the Fiat 124 Spider. It’s a hugely popular sports car owning to its style, performance, and price. What’s not to love with a sticker price of $26,935? For that money, owners get a turbocharged engine and a suspension calibrated to provide a more planted feel and less body motion. You also get exceptional handling, a smooth engine, and tricked out technology. It’s also available in a convertible version for a little more money. Anyway you look at it, the Fiat 124 Spider is an exceptional sports car – it combines style, performance, and price to make for one irresistible vehicle.

Another iconic muscle car that is surprisingly inexpensive is the Ford Mustang. This is one of the most recognizable and beloved cars in automotive history. A true classic in every sense of the word. The Mustang is still within most people’s reach at a base model price of $27,765. Even a base model Fastback Mustang comes in at under $30,000. The Mustang can easily be upgraded and made much faster, but still comes in at less than $40,000. While vintage Mustangs sell for millions of dollars, the newer models are much more reasonably priced. Today’s new Ford Mustang could become tomorrow’s classic and prove to be a great investment. Who knows.

Inching closer to the $30,000 threshold, we have the Nissan 370Z. Here we have a very nice, although somewhat more expensive, sports car. The standard features of the Nissan 370Z include a 3.7-liter V6 engine that cranks 332 horsepower, comes with a six-speed manual transmission and has four-wheel anti-lock brakes, 18″ aluminum wheels, and cruise control. These features (and the price) have helped to make the Nissan 370Z another favorite among street racers and sports car collectors. While not the greatest performance vehicle on this list, the Nissan 370Z nevertheless deserves a look given its engine and sticker price.

Arguably one of the most popular cars today is the Honda Civic Type R. This car rattled the performance race car world when it debuted and quickly became the benchmark for hot hatchbacks that pack a punch. At less than $40,000, the Type R remains an affordable and attractive sports car option. The combination of price and performance helps to make this a favorite among twentysomething drivers and racers all over the world. Owners even like the Type R’s anime-inspired Japanese design, as well as its massive wing on the back. For a hot rod masquerading as a hatchback, look no further than the Honda Civic Type R. A real bargain at a cost of $37,230.

The most expensive sports car on this list (but still less than $40,000) is the Subaru WRX STI, It’s a racer that offers a 2.5-liter flat-four engine that provides old-school turbocharging and speed. For $37,895, it is hard to go wrong with this car. The 2020 version is a modern marvel of engineering with keyless entry, push-button start, and 19-inch dark-gray wheels that have a machine finish.

The all-wheel-drive traction make the Subaru WRX STI a great performer on any road surface, and it also boasts decent fuel economy and wide cargo space. For the base model price, owners also get a 5.9-inch color information screen atop the dash, and a pretty good five-year powertrain warranty. If you can find a better sports car for less than $40,000, we’d love to hear about it. 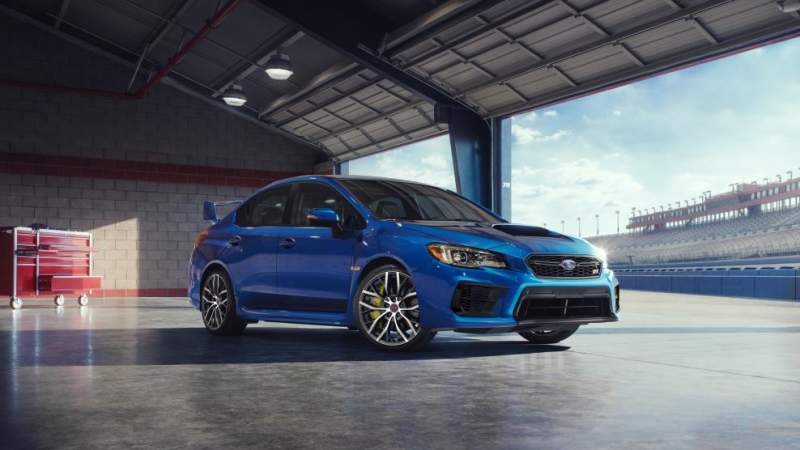