The Most Affordable Luxury SUVs on the Market

SUVs are arguably the most expensive class of automobile outside of high-end performance sports cars. Many luxury SUVs from top brands such as BMW, Audi, and Porsche cost more than $100,000. That’s far too rich for most people (and the insurance ain’t cheap, either). Fortunately, there are several luxury SUVs that are more affordable. In fact, every vehicle on this list starts at under $40,000.If you want a luxury drive on a budget, these are the SUVs to consider. Here is a list of the ten most affordable luxury SUVs on the market today.

The Range Rover Evoque used to be the cheapest Land Rover on the market. Not anymore. Today, the Discovery Sport holds the Crown for being the cheapest Land Rover. The company calls the Discovery Sport its “entry-level car.” It sells for $37,990, which is $20,000 less than the standard Land Rover Discovery. It’s worth noting that the company uses the designation “sport” to denote a cheaper version of a standard model that it sells.

If you want to get into a Land Rover on the cheap, the Discovery Sport is the vehicle to buy. It comes with most of the bells and whistles that Land Rover owners have come to love and expect, including all-wheel drive, a superb infotainment system and optional towing package. Definitely worth considering at this price point.

The X2 is a luxury subcompact SUV and among the most affordable BMW model to get into. It comes well-equipped at a starting price of just $36,400. Standard features include a 2.0-liter, I-4 228 horsepower intercooled turbo engine, 8-speed automatic transmission with “overdrive,” four-wheel anti-lock brakes (ABS), an integrated navigation system that is among the best in the automotive industry, side seat mounted airbags, automatic air conditioning, 18″ aluminum wheels, cruise control, distance pacing, and traction control. It also has leather interior and surround sound speakers. Critics have praised the X2 for its handling, responsiveness and for offering great fuel economy. We think this car offers great value for anyone looking to own a Beemer.

For many people, the Lexus brand is synonymous with luxury vehicles. People adore these cars from top-to-bottom. The Lexus NX300 is no exception. At under $36,000, this SUV provides exceptional luxury at value pricing. Standard features of the Lexus NX 300 include a turbo engine, six-speed automatic transmission with overdrive, four-wheel anti-lock brakes, side seat mounted airbags, 17″ aluminum wheels, Dynamic Radar Cruise Control electronic stability, and an all-wheel drive option.

The interior is surprisingly roomy for a smaller SUV. Plus, the GPS and infotainment system are cutting edge all the way. For many people, getting into a Lexus SUV at this price is a dream come true.

We recognize that Caddies are not for everyone. Some people wouldn’t be caught dead in a Cadillac. However, for those with an open mind, we offer the XT4. It’s a luxury SUV from Cadillac that has value pricing built in at $35, 695. In actual fact, the XT4 is a “crossover” rather than a pure SUV. It’s also among the more highly rated luxury crossover vehicles available today. Reviewers consistently rank it higher than many of its peers.

It is also one of the roomiest and more comfortable vehicles on this list. The XT4 is known for getting great gas mileage too. Despite some reputation hangover from the past, Cadillac is reinventing itself as one of the highest end luxury automotive manufacturers in America. The XT4 is worth a test drive. You may be surprised.

Audi was bound to score an entry on this list somewhere. They arrive at number six with the venerable Q3. Although it’s not as big as some of Audi’s other SUVs, the Q3 is a sporty and nimble ride that critics and consumers seem to love in equal measure. Looking similar to a Subaru Outback, the Q3 is a handsome car that has no right to perform as well as it does.

U.S. News has listed the Q3 as one of the top five compact luxury SUVs for 2019. The magazine praises the Q3’s spacious interior, powerful engine, and ample cargo space — espeically when compared to other compact SUVs. The Q3 also comes with all the amenities found in other Audis – from the heated seats to a head-up display and large infotainment system that is compatible with Android Auto and Apple CarPlay.

At an entry level price of $33,700, the XC40 is Volvo’s cheapest car. However, that doesn’t mean the Swedish automaker has scrimped on the luxuriousness. On the contrary, the Volvo XC40 is generous with its many standard features, and has interior has style to spare. Since it’s a Volvo, the XC40 also comes with a ton of safety features.

The only knock on this luxury SUV is a slightly lack of cargo space. That’s a small price to pay when you consider all the other benefits of owning a Volvo for well under $35,000. This is a luxury SUV for people who appreciate practical, well-made vehicles.

In the world of luxury vehicles, Mercedes-Benz has an almost cult-like following. Many people refuse to drive anything else. For those of you without unlimited resources, we offer up the affordably priced Mercedes GLA 250, which starts around $33,400.

Standard features include an intercooled turbo engine, seven-speed auto-shift manual transmission, four-wheel anti-lock brakes (ABS), a child seat airbag sensor, automatic air conditioning, 18″ aluminum wheels, cruise control, traction control, and electronic stability. Leather interior, responsive handling, dual zone climate control, and lots of cargo space round out the benefits of this luxury SUV. If you have to have a Mercedes, than you should consider the affordable GLA 250.

Lincoln is quickly gaining a reputation for its SUVs, and the MKC is one of the company’s finest. It’s a classy ride, not to mention quite affordable at $33,355. For that price, people get an impressive engine that can produce 245 horsepower, anti-lock brakes, and a host of other safety features. You also get plenty of leg room, ample cargo space, and all the bells and whistles on the console that one expects from a luxury vehicle.

While Lincoln may not be the coolest automotive brand around, their SUVs are highly rated by critics. Most drivers who decide on a Lincoln end up being repeat customers. Before you settle on a luxury SUV, be sure to checkout the MKC. The price is hard to beat and you get a lot for the money.

Like Cadillac and Lincoln, Buick is another brand that has a checkered history. It’s sometimes considered an old person’s car and ends up as the butt of many punchlines. However, the Buick Encore is no joke. It’s a legit luxury SUV for under $25,000. Are you kidding with that price?

Although Buick models are often referred to as “entry-level luxury,” they still provide a lot of value and benefits for the price. The Encore is particularly appealing given that it’s technically a crossover model.

Reviewers claim that it handles well. Much like the previously mentioned Volvo XC40, the Encore doesn’t hold back on standard features either. Higher trim levels add leather seats and more comfortable enhancements, at which point you’re going to find yourself in the $30,000 range. That’s still very affordable for a luxury SUV, though. Some detractors might not consider a Buick a luxury car, but in terms of compact crossovers, the Buick Encore is the leader of the pack.

The Infiniti QX30 is priced under $30,000, which is very impressive considering its luxury pedigree. That price gets you some of the best automotive engineering in the world, as well as a 2.0 liter engine, seven-speed auto-shift manual transmission, 18-inch aluminum wheels, and a spectacular interior.

Critics describe the QX30 as among the most stylish compact SUVs anywhere. At this price, it’s hard to turn away. Infiniti’s other models sell for well north of $50,000, making the QX30 among its cheapest nameplates. If you’ve always been curious about the Infiniti brand, start by checking out the QX30. You can afford it – literally.

However, you better act fast. Infiniti discontinued the QX30 after the 2019 year, meaning the last brand new models are currently being sold off. If you do miss out on snagging a new one, there will probably be plenty of gently used QX30s kicking around within 18 months — at an even better price! 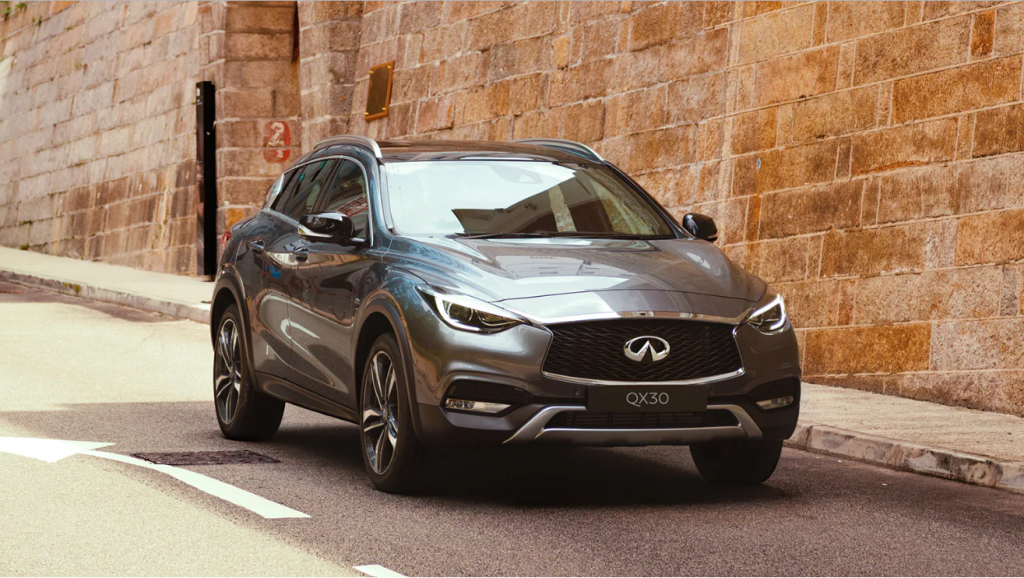