The term “supercar” refers to an exotic, high-performance sportscar. They are designed for the racetrack but usually remain street legal. So yes, you can buy one and use it on regular roads and highways. During the 1960s, muscle cars were often called supercars. Since the year 2000, the term “hypercar” has been sometimes used to refer to the highest performing supercars on the market.

Regardless of how they are defined, supercars are super cool. They represent the apex of design, performance, and power. Not to mention their amazing appearances. They often come with an eye-popping price tag too. Supercars typically cost more than $500,000, with many of them actually topping the $1 million mark. They might not be for the average consumer, but it’s still fun to drool and dream, right? Here is our picks for the ten greatest supercars of all-time.

If you have $175,000 to spend, then you may want to consider purchasing a Lamborghini Gallardo. It’s the bestselling Lamborghini of all-time, moving more than 14,000 units during its production run from 2004 to 2014. The Gallardo is gorgeous — the kind of car that you see on posters in dorm rooms. It’s an extremely powerful car and looks so unique. It’s unmistakable as a Lamborghini. What else could it be?

A V10 engine allows it to go 0-to-60 mph in less than four seconds. The interior is a little sparser than some other vehicles on this list. However, it still boasts leather seats, a touch screen navigation and entertainment system, and handling that is simply out of this world. A popular car among actors, athletes, and celebrities, the Lamborghini Gallardo has to be driven to be fully appreciated.

The Ferrari F430 is considered an “entry-level” car by the automaker. However, there is nothing “entry level” about this ultra-cool convertible. The F430 is a mid-engine, paddle-shifting exotic Italian sports car that exemplifies what it means to drive a Ferrari. A V8 engine still produces plenty of power and torque, and the carbon fiber brakes are exceptional.

This car rides on exclusive Goodyear Eagle F1 GSD3 EMT tires. And yes, it feels a true race car from behind the wheel. Stylish, cool, and convertible, the Ferrari F430 is one of the very best supercars you can buy. You probably won’t be surprised to learn it’s not the only Ferrari on this list. The Ferrari brand is iconic with supercars. The company has produced so many, it can be hard to narrow them all down.

The Aston Martin DB11 is a sexy and sleek luxury supercar that delivers everything you would expect from James Bond’s favourite automaker. Built with lightweight aluminum and propelled by a supercharged V12 engine that cranks out 660 horsepower, this car can launch from 0-to-60 in less than four seconds. Other reasons to drool over the DB11 include electric powering steering, an adjustable suspension, and torque to spare.

The interior is pure luxury. It’s so classy, it might make you forget that you’re actually driving a rocket. Designed front-to-back with a classic feel, the DB11 turns heads everywhere its goes. Making its debut in 2017, the DB11 has been a bestseller for Aston Martin over the past three years. It shows no signs of slowing down.

The Camaro has always been awesome. The 2017 ZL1 version doesn’t disappoint, either. It’s a supercar that looks great on both the highway and test track. In other words, you can use the ZL1 either as a luxury sports car or a full-fledged race car. Designed to leave the Ford Mustang and Dodge Challenger in its dust, the Camaro ZL1 has a V8 engine that produces 640 horsepower. It’s also tricked out with a six speed manual transmission for those who still appreciate that sort of control over their driving.

Other reasons to choose this supercar include performance traction control, a supped-up suspension, and superior handling. Inside, you’ll be treated to sport seats, a steering wheel that is covered in suede, muscular controls, and an equally muscular stick shift. If this car weren’t awesome enough already, it’s also available in a convertible version.

A curiosity from the not-too-distant past is the Vector W8. It’s a supercar that was produced at the dawn of the 1990s. With style to spare, the Vector W8 was the type of car that adorned plenty of PC desktop backgrounds back in the days of Windows XP. However, the Vector W8, manufactured by the Vector Aeromotive Corporation, was more than just a pretty face. It also had award-winning power.

With a maximum speed of 258 mph, the Vector W8 attracted a lot of attention due to the engine housed under the car’s bonnet. Tricked out with a 6.0L V8 twin-turbo charged engine, with 16 valves and 625 horsepower, the Vector W8 blazed a comet-like path across the automotive back in 1990. Additionally, the engine had an aluminum small block with an intercooler and twin turbochargers to make it that much more powerful and impressive.

Another Aston Martin makes our list, which is hardly a surprise. In addition to making some extremely elegant cars over the years, Aston Martin has also made some extremely fast and powerful vehicles. One of its more recent tour de forces has been the Vantage GT12. A race car that is street approved, the Vantage GT12 is fired by a V12 engine that produces 595 horsepower and can reach speeds of 185 mph.

Described by critics who test drove the car as “angry” and “challenging,” the GT12 is also known for being very loud and noisy. The engine’s sound is magnified by a titanium exhaust that amplifies the growls and roars. It’s also known for loud cylinder explosions during acceleration. If you need bystanders to feel your car’s power in their bones when you hit the gas, the Vantage will do the job nicely.

The other Ferrari on our list is the F12 TdF. Capable of producing 770 horsepower and reaching speeds of 211 mph, the F12 TdF is amazing on both the track or the highway. This Ferrari supercar is known for being both incredibly fast and surprisingly stable. A Ferrari in the truest sense, this car combines expert engineering with beautiful design. It’s both powerful and luxurious. And it has impressed automotive critics and consumers worldwide.

The Ferrari F12 TdF has proven that it belongs in the pantheon of great cars produced by Ferrari. Naturally, you can get it in classic Ferrari Red. All you need is about $500,000 in spare change. But with 770 horsepower under the hood, it may well be worth the investment.

The Bugatti Chiron, which went into production in 2016, is one of the very best modern supercars. To top the Veyron 16.4, the engineers at Bugatti outfitted the Chiron with a 1,500 horsepower luxury hypercar engine. This bad boy can hit a top speed of over 260 mph and reach 60 from a standing start in just 2.3 seconds. Moreover, the Chiron is a masterpiece of design.

It maintains a similar shape and structure as the infamous Veyron 16.4. However, there are some critical changes that include LED headlights, sharp lines, a revamped interior, and a more aggressive looking grille. In all, the Chiron combines the best of the Veyron 16.4 while still improving on it in some critical areas. Very few cars can match the Chiron’s combination of design and performance.

Crossing the $1 million threshold for a supercar is the Zenovo ST1. It comes with a list price of $1.2 million. For that sizable price tag, you’ll get one heck of a machine.  This beautiful vehicle sports a seven-litre, V8 engine that generates a top speed of 233 mph. That’s insanely fast.

Manufactured in Denmark, the Zenovo ST1 was built by the hands of a small team who paid attention to every conceivable detail in the car. The first vehicle built by Zenovo, the ST1 has more than 1,100 horsepower to command. It also comes with features such as keyless entry, satellite navigation, a telescopic steering wheel, and adjustable leather racing seats. However, this car is ultra exclusive. Only 15 were ever built. Look for this supercar at auctions around the world, as owning one proves to be a difficult task.

Pronounced “One-to-One,” this car by Swedish automaker Koenigsegg Agera is named for its power-to-weight ratio. It has 1,360 horsepower and weighs 1,360 kilograms, a perfect balance. The One:1 boasts power equivalent to one megawatt of energy, leading analysts to call it the world’s first “megacar.” Indeed, the vehicle can hit 250 mph in under 20 seconds thanks to a twin turbocharged V8 engine.

It also has a seven-speed dual clutch paddle shift and a carbon fiber engine that weighs less than 500 pounds (which is relatively light). Only six of these cars were ever built and were all sold to pre-orders. At $2 million apiece, it’s no surprise that this supercar was sold only to exclusive (and ultra wealthy) buyers. But the Koenigsegg One:1 is among the best supercars ever produced. 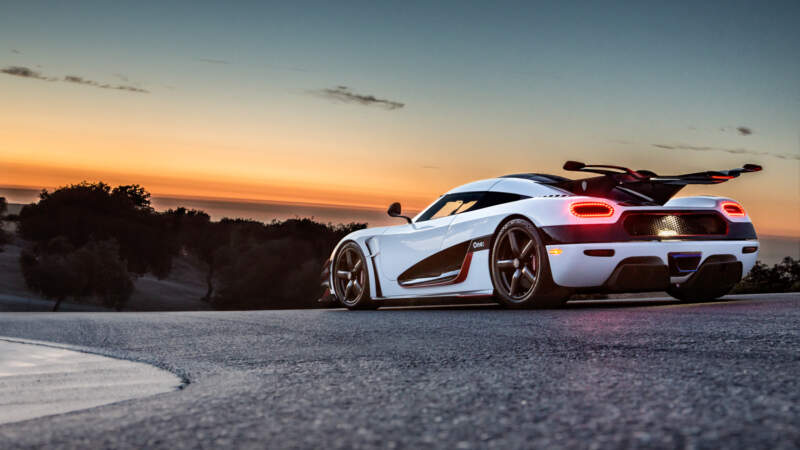