Race car fans are a passionate bunch. As with any sport, fans love to discuss and debate who is the greatest driver of all-time. Whether Formula One, IndyCar, or NASCAR, race fans hotly debate the merits of various drivers. They weigh their championships, rivalries, accomplishments, and overall legacies. Here at Autoversed, we’re passionate about racing too. We have our own opinions on who is the greatest driver in history. Here’s our personal list of the top ten race car drivers of all-time.

An underrated driver in our view, Jeff Gordon deserves inclusion on this list for both his wins and style. A passionate, no-holds-barred racer, Gordon is one of the premier NASCAR drivers of all-time. He has earned 88 wins, four championship titles, and three Daytona 500 cups in his illustrious career.

Some critics claim he needs a fifth NASCAR title to enter the conversation as one of the best drivers in history. However, Gordon likely would have more championships to his name if it weren’t for constantly changing circumstances. You see, NASCAR kept altering their rules and adding gimmicky racing formats meant to draw in larger television audiences. Nevertheless, Gordon has been one of the most entertaining NASCAR drivers throughout his career. He has a flare and competitiveness for racing that is all his own. He is a “champion” in every sense of the word.

Alain Prost is the most famous French race car driver of all-time. A four-time Formula One champion, Prost has the fourth-most F1 drivers’ titles of all-time. Only three men have more. From 1987 until 2001, he held the record for most Grand Prix victories in history. That would be impressive enough. However, Prost also enjoyed a number of classic rivalries with other drivers during the 1980s and 90s, notably with Ayrton Senna and Nigel Mansell.

In 1986 he beat Mansell to the Formula One championship in the last race of the season. An instinctive driver, Prost was known for his smooth, relaxed style behind the wheel. Nicknamed “The Professor” for his intellectual approach to racing, Prost received the World Sports Awards of the Century in the motorsport category in 1999.

Known as “Super Tex” to friends and foes, A.J. Foyt is one of the best American race car drivers of all-time. His status is distinguished by the fact that he raced in several different genres of motorsport. This included Automobile Club Champ cars and midget cars. He also raced in NASCAR. Foyt holds the USAC career wins record with 159 victories, and the American championship racing career wins record with 67 first place trophies.

Additionally, Super Tex is the only driver to win the Indianapolis 500 (which he won four times), the Daytona 500, the 24 Hours of Daytona, and the 24 Hours of Le Mans. Foyt also won the International Race of Champions all-star racing series in 1976 and 1977. In NASCAR, he won the 1964 Firecracker 400 and the 1972 Daytona 500. This incredible run was punctuated by the fact that Super Tex survived three serious crashes during his career, that left him with lifelong injuries. It’s not at all surprising that Foyt has been inducted into numerous motorsport Halls of Fame.

As a current driver, some people may feel it is premature to put Jimmie Johnson on this list. However, Johnson has accomplished plenty in his career so far. The American has already won the NASCAR Sprint Cup Series seven times. He won his first Cup Series championship in 2006, followed by consecutive wins in 2007, 2008, 2009 and 2010. Then he added titles in 2013 and 2016 to punctuate his dominance. Johnson is the only driver in NASCAR history to win five consecutive championships.

Johnson is also a two-time Daytona 500 winner, with victories in 2006 and 2013. Between 2002 and 2015, Johnson amassed 72 wins, 292 Top 10 finishes and 33 pole positions. He also has the distinction of being the first driver to be named the Associated Press Male Athlete of the Year, which he won in 2009. He has won Driver of the Year five times, most recently in 2013. Forbes magazine named Johnson the Most Influential Athlete in 2011 and 2012. If that weren’t enough, Johnson is the only driver to have qualified for the Chase series every single year since it started in 2004. Not a bad record—with more to come.

A pure NASCAR driver, Richard Petty raced in the Grand National era of the NASCAR Winston Cup Series. Nicknamed “The King,” he won the NASCAR Championship a record seven times (tied for most wins with Dale Earnhardt). He also won a record 200 races during his career. Petty won the Daytona 500 a record seven times, and won a record 10 consecutive races in the 1967 season. Statistically, Petty is the most accomplished driver in the history of NASCAR. He remains one of the most respected figures in motorsports.

Petty’s other accomplishments included winning a record number of pole positions (127) and over 700 Top 10 finishes in his 1,184 starts, including 513 consecutive starts from 1971 to 1989. Petty was a member of the inaugural class of the NASCAR Hall of Fame in 2010. A well-deserved honor.

A legend in his native England, Nigel Mansell won both the Formula One World Championship in 1992 and the CART Indy Car World Series in 1993. He was the reigning F1 champion when he moved to CART, becoming the first person to win the CART title in his debut season. It also makes him the only person to hold both titles simultaneously. Pretty impressive.

Equally impressive is the fact that Mansell’s career in Formula One lasted 15 seasons, with his final two full seasons spent in the CART series. Mansell is seventh overall on the list of Formula One winners. He held the record for the most number of poles set in a single season, which was eventually broken in 2011.

Since his retirement, Mansell has been named one of the top five Formula One drivers of all-time. In 2008, ESPN named him one of their top drivers ever. He has also been ranked number nine among the 50 greatest race car drivers of all time by the Times of London newspaper. In 2005,Mansell came out of retirement to race in the Grand Prix Masters series. Fittingly, he won the championship. He was inducted to the International Motorsport Hall of Fame later that year.

Brazilian race car legend Ayrton Senna won three Formula One world championships before a tragic accident took his life. He was sadly killed on the track while leading the 1994 San Marino Grand Prix. During his career, Senna was one of the most dominant and successful Formula One drivers of the modern era. He is considered by many racing enthusiasts as the greatest driver of all-time. His incredible focus, smooth driving skill, and fearlessness on the track earned him millions of fans.

Senna made his Formula One debut in 1984. He won six Grand Prix races in his first three seasons as a driver. In 1988, he won all but one of the 16 Grand Prix and accomplished his first World Championship. He won his second and third championships in 1990 and 1991. His rivalry with Alain Prost during this period dominated global motorsport. From 1989 until 2006, Senna held the record for most pole positions. He is the third most successful driver of all-time in terms of race wins, despite his career being cut short.

“The Intimidator,” as Dale Earnhardt was known, represents the pinnacle of excellence for many racing fans. The premier NASCAR driver of his era, Earnhardt started his legendary career in 1975 at the World 600, which was held at the Charlotte Motor Speedway as part of the Winston Cup Series (today the Sprint Cup Series). From there, Earnhardt won a total of 76 Winston Cup races. That includes a memorable Daytona 500 victory in 1998. He also earned seven NASCAR Winston Cup Championships. That ties him with Richard Petty for the most all-time.

His aggressive, some claim dangerous, driving style earned him the nickname “The Intimidator.” Sadly, Earnhardt was killed at the Daytona International Speedway, while competing in his beloved Daytona 500 in February 2001. He was involved in a crash on the very last lap, which unfortunately took his life. He has since been inducted into numerous halls of fame, including the very first class of the NASCAR Hall of Fame. A fitting tribute to the man who helped to popularize the sport of NASCAR.

The runner-up position goes to German driver Michael Schumacher. A seven-time Formula One world champion, Schumacher is regarded as one of the greatest F1 drivers to ever do it. He’s certainly the most successful of the modern era. At least until Lewis Hamilton retires, maybe. He was named Laureus World Sportsman of the Year twice, and holds many F1 records, including most championships, race victories, fastest laps, pole positions, and most races won in a single season.

In 2002, Schumacher became the only driver in F1 history to finish in the top three in every race of a season. He also broke the record for most consecutive podium finishes. According to the official F1 website, Schumacher is “statistically the greatest driver the sport has ever seen.”

Sadly, Schumacher suffered a serious head injury while skiing in 2013. Doctors put him in a medically induced coma, telling the world’s media that he suffered a traumatic brain injury. He was in the coma for nearly seven months until June 2014. Schumacher survived, but is now paralyzed and in a wheelchair, bringing a sad end to his illustrious driving career.

At number one sits Mario Andretti, the Italian-American race car legend who transcended motorsport. A household name all over the world, Andretti is one of only two drivers to win races in Formula One, Indy Car, World Sportscar Championship, and NASCAR. He also won races in midget cars and sprint cars. During his illustrious career, Andretti won the 1978 Formula One World Championship and four Indy Car titles.

If all those championships weren’t enough, Andretti is also the only person to be named United States Driver of the Year in three separate decades (1967, 1978 and 1984). He was also one of only three drivers to win races on road courses, paved ovals, and dirt tracks in a single season. In fact, he accomplished that feat four different times. For all these accomplishments, Andretti is considered the definitive race car driver by most historians and critics. As an athlete, he dominated motorsports the way Michael Jordan dominated basketball and Wayne Gretzky dominated hockey. The name Mario Andretti is synonymous with excellence on the race track. Any race track! 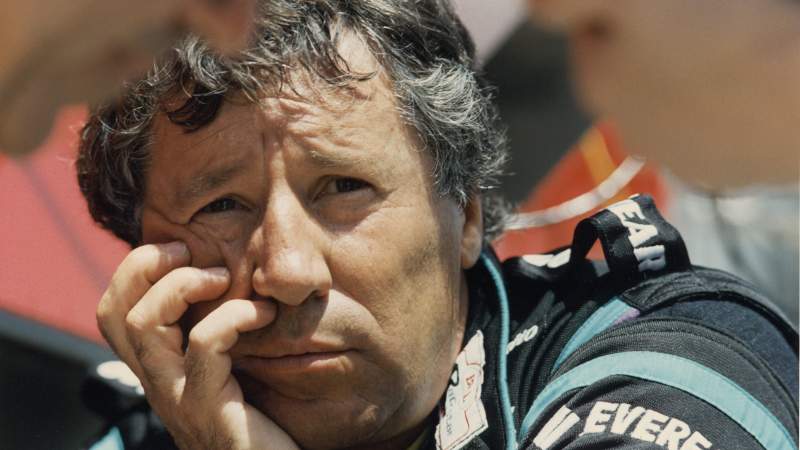