Wealthy people love their toys. That is certainly true of car collectors. The super-rich, whether they be businessmen, athletes, entertainers, or royalty, love to collect cars. Many of them have amassed truly awe-inspiring collections. They are filled with the latest supercars, along with exclusive vintage automobiles and extremely rare models. Many of the world’s top car collectors have spent a small fortune to grow, restore, maintain, and house their cars in pristine condition. Here’s a list of the ten greatest car collections in the world today and the people who own them.

Anyone who has seen Jerry Seinfeld’s Netflix series Comedians in Cars Getting Coffee knows that the stand-up king is both a fan of vintage cars and very knowledgeable about automobiles in general. So it’s no surprise to learn that Seinfeld owns a hugely impressive multi-million-dollar collection of rare cars.

Seinfeld is particularly fond of rare Porsche models. He boasts at least 46 ultra-rare versions of the sports car in his collection. In fact, many of the vintage cars featured on Comedians in Cars Getting Coffee come from Seinfeld’s own garage. Speaking of, Seinfeld houses more than 100 cars in a three-story underground compound on Manhattan’s Upper West Side – which is some of the most expensive real estate in the world. The compound was built in 2011 and is located close to his Central Park penthouse. It includes four large garages, a lounge area, a kitchen, a bathroom. and an office.

Back to those extremely rare Porsche models in Jerry’s collection. They include the very first 911 ever produced, an exceptional and very valuable 959, and a 1955 550 Spyder — the same model that James Dean was driving when he crashed and passed away.

Nick Mason is the long-time drummer for legendary rock band Pink Floyd. His success has given him the resources to afford an impressive car collection. When Mason isn’t drumming, he is busy tending to the more than 40 rare and high-end vehicles he owns.

Mason has a particular fondness for Italian sports cars. Some of the most impressive cars in his collection include a Bugatti T35, an Aston Martin LM18, a Ferrari 213 T3, McLaren F1, Porsche 962, and the infamous Ferrari 250 GTO that is valued at more than $20 million. Mason is not shy about showing the cars off to other collectors or letting the public get a glimpse at auto shows around the world. The collection has also been featured on numerous television shows, including Top Gear.

George Foreman is best known as a former heavyweight boxing champion. Or maybe you remember him as the pitchman for that clever kitchen grill. In addition to those successes, Foreman is also an avid car collector. He’s amassed one of the most impressive automobile collections in the world. Today, Foreman owns so many cars that he claims that he’s lost count. Whatever the actual number, they are stored in multiple garages. He even jokes about how many cars there are, saying “I’ve taken to hiding them from my wife.”

Nevertheless, Foreman’s collection includes many beautiful models. There are multiple Corvettes, as well as a 1950 GMC pickup, a Ferrari 360, a Lamborghini Diablo, and a Ford GT. Despite owning several exotic cars, Foreman claims that the favorite vehicle in his collection is actually a 1977 Volkswagen Beetle.

“I got the Volkswagen, and the other cars are just dressing around it. It’s not the most expensive, but it’s cherished with me because you never forget where you come from,” he has said about the vintage Bug.

Ralph Lauren is known as a fashion mogul who has done wonders for the polo shirt. However, in his private life, he’s an avid car collector. He has used his fashion success to amass a stunning collection of cars – almost all of them red. Lauren owns Ferraris, Alfa Romeo roadsters, Bugattis, Mercedes, Bentleys, Jaguars, and McLaren F1 sport cars – more than 60 in total. And yes, about 98% of them are red.

To store them all, Lauren had a special garage made at his New York estate. There, the cars sit on an all-white platform raised over a black carpet. Like many of his fashion creations, the garage is super stylish. Clearly Lauren knows what he likes.

Here’s another boxer on our list. Like George Foreman, Floyd Mayweather has amassed a fortune in the boxing ring. The now-retired undefeated champion earned a stunning $180 million for one single fight – his 2015 bout against Manny Pacquiao. His much hyped “superfight” against UFC Champion Conor McGregor reportedly earned him another $100 million.

With all that cash, Mayweather can afford to purchase extravagant cars from around the world. The boxer says he has bought more than 100 cars over the past 18 years — most of them sports car or supercars. His collection includes multiple Bugattis, which are about $2 million each. Mayweather recently put one of his ultra-rare cars on the market. It’s a $4.7 million Koenigsegg CCXR Trevita, one of only two in the whole world. The CCXR Trevita has a 1,018-horsepower engine and a top speed of 254 miles per hour. While Ralph Lauren prefers his cars to be red, Mayweather loves his cars to be all white. However, he still does own some cars in other colors.

Who is Gerard Lopez, you might ask? He is a venture capitalist who put his money into developing Skype. Between that and other investments, he’s made a fortune. He took that money and got involved in Formula One racing. Today, Lopez is Chairman of the Lotus F1 Team. Additionally, the Luxembourg-born businessman’s love of cars extends to his personal life.

Lopez has a truly amazing car collection, which has been showcased on various television programs around the world. The collection includes vintage muscle cars and hot rods, as well as classic Porsche, Peugeot, and Bugatti models. There are plenty of other exotic cars too. The entire collection of more than 80 vehicles is estimated to be worth more than $100 million and counting.

Ken Lingenfelter is an American business mogul. He is the driving force behind Lingenfelter Performance Engineering. As you can see, he loves all things that have to do with cars. He currently owns more than 150 vehicles, including 20 Lamborghinis. He also owns rare Corvettes, Mustangs, and Porsche models.

Lingenfelter owns so many cars, he had to build a 40,000 square foot garage in Michigan to house them all. It comes complete with special climate control features to help keep the cars in pristine condition during the frigid Michigan winters. Lingenfelter admits that his collection is pretty random. It even includes a lot of duplicate vehicles, notably Camaros and Corvettes. He claims he just can’t help himself. When he sees a car he wants, he buys it on the spot!

Rodger Dudding boasts the largest car collection in Britain. It’s a collection that numbers 350 vehicles and is worth well north of $100 million. Just the garage itself cost more than $10 million to design and build. Dudding made his fortune by inventing the paper-ticket machine, which was adopted by large retail chains like Harrods and Selfridges.

His passion for cars began in 1952 when his father purchased a Morris Minor. That particular vehicle is now considered Dugging’s most prized item. His car collection has some other unusual models in it, including 24 Lagondas, a rare and unpopular Aston Martin of which only 645 were made, and an extremely rare 1911 Vulcan Tourer.

Comedian and former Tonight Show host Jay Leno is a self-proclaimed “car freak” and “gear head.” He currently hosts his own TV program about cars called Jay Leno’s Garage. On it, he simply shows off the rare vehicles from his personal collection. And what a collection it is!

Leno has one of the world’s biggest collection of rare and antique cars. We’re talking ultra-rare. His collection of more than 200 vehicles includes a perfectly maintained 1909 Baker Electric, a 1931 eight litre Bentley, a 1909 Stanley Steamer, a 1934 Phantom II from Rolls Royce, a 1927 Duesenberg Model X, and a 1925 Hispano-Suiza. Leno also owns 22 steam-powered vehicles and 25 classic race cars.

This is indeed a car collection to behold. It rivals any museum in the world. In fact, museum curators from all over the globe visit Leno to view his car collection, which is estimated to be worth more than $350 million.

1. The Sultan of Brunei

For the Sultan of Brunei, money really is no object. Hassanal Bolkiah can buy anything he wants with a net worth of around $20 billion. It just so happens that the Sultan loves cars. He owns the biggest royal palace on Earth, so it should come as no surprise that he also has an impressive car collection.

By some accounts, the Sultan’s car collection numbers 7,000 vehicles. It includes more than 250 BMWs, 574 Mercedes Benz, 452 Ferraris, 179 Jaguars, 382 Bentleys, 134 Koenigseggs, a slew of Lamborghinis, as well as Aston Martin, Cicero BDB Maestro. Really, the list goes on and on.

The Sultan also has a number of limited edition concept cars that were made especially for him such as the Ferrari Mythos, Bentley Java, and Porsche Carma. The Sultan’s car collection is said to be both the biggest and rarest of any personal collector on earth. 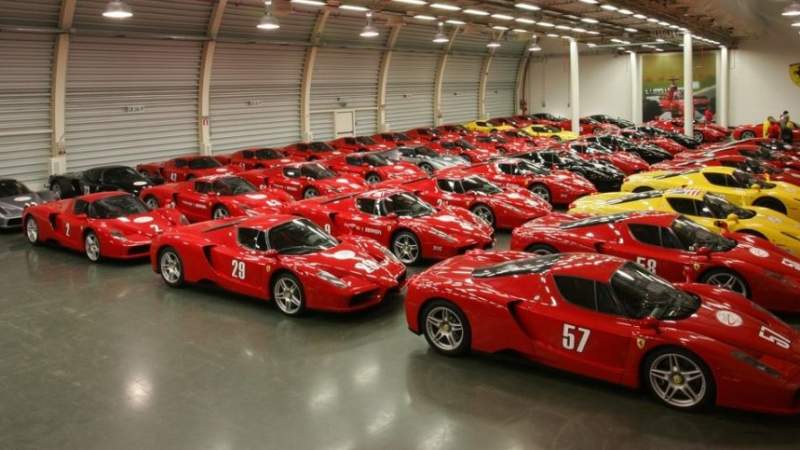