The Coolest Ferraris Of All-Time

When it comes to exotic cars, Ferrari stand alone. There really isn’t another brand that can compare to Ferrari. It represents the height of Italian style and European engineering. Founded by Enzo Ferrari in 1939, the company produced its first car in 1940. Since then, Ferrari has consistently turned out one amazing car after another. The company has been so consistent for so long, that Ferrari is the now one of the world’s most powerful brands.

In May 2012, a 1962 Ferrari 250 GTO became the most expensive car in history. It sold in a private transaction for $38.1 million. If this weren’t enough, Ferrari is also closely associated with Formula One racing. Their F1 team is the most successful of all-time, holds the most championship titles, and has produced the highest number of winning drivers in history. With all this in mind, we offer you the following list of the ten best Ferraris ever made.

This Ferrari is an extremely rare racer. That’s probably why is sold for nearly $40 million a few years ago. Yes, it has the distinction of being the most expensive vehicle in automotive history. Most car collectors would agree that the 1962 Ferrari 250 GTO is worth its steep price tag, with its 300 horsepower V12 engine. That engine, along with its plush styling, have helped to make the 250 GTO a car icon.

Though it was primarily built for racing, and became the template for generations of Ferrari race cars, the 250 GTO also owes its place among the great Ferraris to its style and beauty. This car is striking, with an elliptical grille topped by unmistakable triple vents. It also boasts a huge rear fender and interminable quad exhaust pipes. Stylish vents aft of the front and rear wheels and a large integrated spoiler round out the 250 GTO’s beauty.

In today’s era of low profile tires and big diameter wheels, the GTO’s tall black sidewalls and Boranni wire wheels are a thing of beauty. Each one of the 36 250 GTOs produced between 1962 and 1964 still exists today. But good luck finding one that’s for sale.

Actor Don Johnson of Miami Vice fame had great taste in cars. The black Ferrari Daytona he drove on the show upstaged ever other cool car on the show. And that’s saying something. The 365 GTB/4’s slick wedge shape boasted virtually no angularity, with a neatly curved front end flanked by big yellow parking lights. The long touring style hood boasted nothing dramatic, but it gives the Ferrari Daytona its sleek shape.

Under that smooth hood is a strong 4.4 liter V12 engine. It’s fed by six Weber twin choke 40mm carburetors. That powerful engine, together with great weight balance, makes for some impressive driving dynamics. Though the Spyder version of this car was Sonny Crockett’s car of choice, the hard top is a worthy option too, with its long, sloping roofline and sleek look. Miami cops never looked so cool.

If there’s a Ferrari Spyder that collectors around the world covet, it’s this one. The California nameplate on this Ferrari means that it was created for wealthy Americans to drive and flaunt. Famed automotive genius Sergio Scaglietti designed the California Spyder as a convertible interpretation of the iconic 250 GT. Safe to say that he knocked it out of the park.

He kept the concept light and simple with aluminum in the hood, doors, and the trunk. The long wheelbase design and long hood give this car a look of supreme elegance, especially with the top down. The fact that only 50 of these cars were ever produced make it a true collector’s prize. They are highly sought after at any auction.

Many consider the 1957 Ferrari 250 Testa Rossa to be the most well-designed Ferrari ever made. Design aside, this car also was a fierce competitor in its day. It literally destroyed everything in its wake on the race track. It was a 1957 Ferrari 250 Testa Rossa that won the 24 Hours of Le Mans in 1958, ’60 and ’61. This classic Ferrari stands as the last front-engined car to win the revered race.

The 250 Testa Rossa, or “Red Head” as it was known, was so named for its painted red valve covers. Designed and built by Scaglietti, the body of the Ferrari 250 Testa Rossa was best known for its big pontoon fenders that stretched all the way to the base of the front windshield. They gave the 250 Testa Rossa a muscular and artistic flair. Today, this car is considered the second most valuable Ferrari (after the 250 GTO), selling for $20 million in recent years.

The Ferrari 512 BB is small, but don’t be fooled. It’s a serious driving machine. This mid-engine car is a true Berlinetta Boxer, sporting a five-liter, 12 cylinder engine with two banks of six horizontally opposed cylinders. This model of Ferrari outclassed the 365 GT4/BB version that it replaced in 1976.

A sharp front end that barely peaks over the front fender wells makes for an incredibly sleek automobile. Safety and function are understated, though present, in a simple front bumper and a small, low set NACA duct. However, it’s the stark, protruding black engine cover housings and massive rear tires that add a perfect touch of danger to this ultra-cool Ferrari.

The best Ferrari produced in the 80s was the 1984 288 GTO. By all accounts, this was Ferrari’s first “supercar.” It was really impressive for its time. This model basically turned the luxury car industry on its head. More than a few of you likely had a poster of this car on your bedroom wall as a kid.

Beautifully designed, the GTO uses composite materials in its wide, low slung body. Big quad driving lights, flared fenders and vents echo the forefather 250 GTO. It was originally built to be a low production vehicle. However, Ferrari eventually exceeded the initial 200 car production quota by 72, due to high demand. All of the road cars were purchased before they were even built.

The 288 GTO’s three-liter twin turbo V8 engine pushed it past the 186 mph mark, making it the fastest production car in the world at the time. It also happened to be marvelous to look at. Seeing one of these cars in-person is pretty mind blowing and not an experience you’re likely to forget.

The 1967 Dino 206 GT Ferrari seems to get more popular as time goes by. The Dino initially sold poorly when released in 1967. However, the slow market has been proven over time. The Dino’s nimble driving capabilities and unique designed turned into a sleeper hit.

The Dino was Ferrari’s first small sports car, created to drive sales. While some people balked at this car’s small size, the Dino won over prospective owners once they got behind the wheel. This car has a low slung look, with its flat duckbill front end and sloping tail. Even with its curved front fenders and thin side vents, it has the same elegance that befits more expensive Ferraris. Now that purists have accepted it as a true Ferrari, the Dino has become a desirable collector’s item. It is fair to say that the 1967 Dino 206 GT has come into its own.

Some people consider the 1959 Ferrari 400 Superamerica Coupé Speciale to be an outlier of sorts. However, the first 400 Superamerica, with its unique appearance, has proven to be a special car. The head honchos at Fiat wanted something different in 1959. So this unique three box Ferrari was unveiled at the Salon de Torino in Coupé Speciale, built especially for Fiat boss Gianni Agnelli. It sported a 340 horsepower V12 engine under the hood.

The car was boxy, yes, and still beautiful in ways other sleeker Ferraris could never match. It had a tall rectangular grille, chrome headlights, a thin chrome bumper, and a tall greenhouse with a schmaltzy wraparound windshield. Most people don’t recognize this car as a true Ferrari. But that’s precisely what makes it so unique and worthy of a high spot on this list.

Ferrari aficionados who know the 250 GT Lusso well simply call it the “Berlinetta Lusso.” Unlike many other Ferraris from the 1960s, the Lusso was not built for racing. Instead, it was built primarily as a luxury vehicle to be sold at retail.

Compared to the 250 GT Berlinetta, this car is far more lush and stylish. It boasts more interior space and luxury appointments. The highlight might be the upscale cabin, which was viewed as a welcome change from the more hard-edged, racing-minded Ferraris that had existed up to this point. The 1962 250 GT Lusso Berlinetta was, and remains, a gentleman’s car. Plus actor Steve McQueen, the King of Cool himself, bought one. There wasn’t a much higher celebrity endorsement.

Red has always been the color synonymous with Ferrari. Not yellow. But the 275 GTB/4 in yellow is more than worthy of the Ferrari brand. Unveiled at the 1966 Paris Auto Show, the 275 GTB/4 was a breathtaking sight at the time. It remains gorgeous to look at, even today.

It’s the heir to the aforementioned 250, with a wide eggcrate grille leading to a long flat hood, and three sets of shark gill vents punctuating its simple profile. Ferrari’s first production car, with four overhead camshafts on a 3.3 liter V12 engine that is capable of producing 300 horsepower, this is a GT car that is every bit as fast as it is beautiful. Though it isn’t as dramatic as the 250, the 1966 Ferrari 275 GTB/4 Berlinetta is still viewed as one of Ferrari’s most beautifully designed and built cars. A true masterpiece worthy of any car collection. 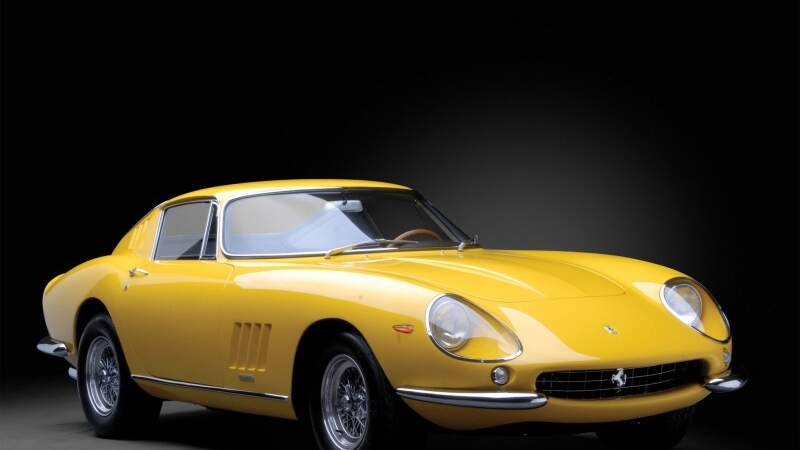