The pool of new cars with an MSRP of $20,000 or less is shrinking year by year. However, that doesn’t mean it’s totally dried up. In fact, there are some pretty good new cars available for under twenty large. The list includes crossover SUVs with a surprising list of standard features, fun-to-drive hatchbacks, and compact sedans capable of punching well above their weight. If you’re in the market for a new car and want to know where the best deals are, then continue reading.

Note: Unless otherwise stated, all prices and features are representative of the 2020 model year.

The Kia Soul used to be known for its quirkiness, thanks in large part to the Dancing Hamster ad campaigns that ran in the early 2010s. The dancing hamsters have since been ditched. However, the original formula that made the Soul a success hasn’t changed. It’s still as eye-catching and spacious as ever, offering seating for five and a whopping 62 cubic feet of storage.

Despite its focus on practicality, the Soul is also somewhat of a driver’s car. The base model offers up a 2.0-liter four-cylinder engine that sends 147 horsepower to the front wheels via a six-speed manual transmission. Yes, the Soul comes standard with a manual. Stick enthusiasts, rejoice.

Despite checking in under $20,000, the Soul isn’t devoid of creature comforts. Standard features include Android Auto and Apple CarPlay and a 7.0-inch infotainment screen.

Just because crossovers and SUVs are selling like hotcakes doesn’t mean demand for sedans has completely disappeared. In fact, the sedan segment is still incredibly competitive under $20,000. There are several solid options to choose from, the best of which is the all-new Nissan Sentra. Most sedans at this price point look like they were designed strictly for rental car companies. However, the redesigned Sentra has a modern look that borrows from Nissan’s larger sedans. Even in the base trim, it’s an attractive ride.

In addition to new sheet metal, the Sentra rides on a new platform. It also has a beefier engine that puts out 149 horsepower, a competitive figure for this price point. The sub-$20,000 Sentra also comes with automatic emergency braking with pedestrian detection, blind-spot monitoring, and a lane departure-warning system. Not too shabby.

Unfortunately, Honda has announced that the Fit will be discontinued after 2020. That’s too bad, because the Fit is one of the best cars for under $20,000. It’s easily the best affordable hatchback on the market. The four-door Fit actually has three different trim levels that start under $20,000, giving you plenty of choice. The priciest of those is the EX mode, at $19,060. It comes standard with a power moonroof and Honda Sensing, the automaker’s suite of safety tech and driver’s aids.

Regardless of the trim you choose, all Fits come with Honda’s “Magic Seats.” They are rear seats that fold up and flat down. This neat packaging trick enables Honda’s hatchback to store an incredible 52.7 cubic feet of cargo. The Fit can earn up to 40 mpg on the highway when optioned with a CVT (a six-speed manual is standard). While it’s no hot hatch, reviewers note that the small Honda can actually be pretty fun to drive.

Rising demand has driven the price of SUVs sky high over the past few years. If you’re looking for a high-riding family hauler for under $20,000, you don’t exactly have a ton of options. Fortunately, there is the all-new Chevy Trailblazer, a subcompact SUV that is big on safety.

The Trailblazer isn’t the most-powerful or rugged SUV around. However, with seating for five and 54.4 cubic feet of storage space, it’s practical enough to meet the needs of most urban and suburban families. Especially those with a tight vehicle budget.

The idea of buying a new car equipped with all-wheel drive for under $20,000 is crazy. Unless you’re shopping for a Subaru, that is. Then you have not just one, but two options. There’s the four-door Impreza sedan or the five-door wagon variant. Both are powered by a naturally aspirated 2.0-liter four-cylinder engine making 152 hp and 145 lb-ft of torque. The Impreza wagon (MSRP $19,195) even offers 55.3 cubic feet of storage space with its rear seats folded down. A five-speed manual transmission is standard, so those with rally car driver dreams can live them out when the paved road gives way to dirt.

Hyundai is doing its best to keep the hot hatchback segment alive in the United States. The Veloster, a three-door hatchback, is as fun to drive as it is to look at. The base Veloster is powered by a 147-horsepower four-cylinder engine, with power sent to the front wheels via a six-speed manual transmission. That’s not a ton of power. However, the Veloster is designed less for straight-line speed and more for handling. In their review, Car and Driver said the hatch’s suspension “masterfully blends comfort and responsiveness” and that its handling is “nimble and rewarding.”

All Velosters come standard with a 7.0-inch infotainment touchscreen and Apple CarPlay and Android Auto. It’s a nice touch on a very affordable vehicle.

Conventional wisdom states that more expensive the car, the safer it becomes. The reasoning is that automakers wil only offer the bare minimum on models with low price tags. You’d be forgiven for thinking that. In some cases, it’s actually true. But the reality is that many luxury sedans offer far less standard safety tech than the Toyota Corolla.

The Corolla’s trump card is Toyota Safety Sense — a goodie bag of safety tech that includes a pre-collision system with pedestrian detection, adaptive cruise control with lane-keep assist, lane departure alert, automatic high beams, and a road sign detection system. If that weren’t enough, the Corolla is also an IIHS Top Safety Pick for 2020. The Corolla remains a top-selling flagship sedan for Toyota year-after-year, and with good reason. If you want to combine safety, practicality, and price into one neat package, it’s the Corolla. 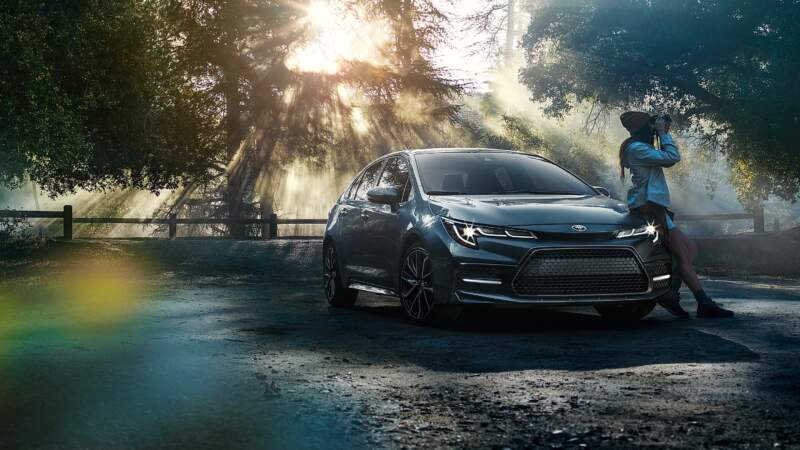