The hybrid SUV segment was born in 2005 with the launch of the Ford Escape Hybrid. Fast forward 15 years and the Escape Hybrid is no longer alone. Most automakers now offer a hybrid SUV. There’s one for just about every price point and person. While choice is never a bad thing, all of those options can make it hard to find the hybrid SUV that’s right for you. Let us help.

Do you need space for a large family and cargo? Or are you more concerned with getting the most bang for your buck? Are you looking for some excitement behind the wheel? If price is no problem, maybe you’re wondering which hybrid SUV will be most exciting in a straight line? Or heading off-road? These can be tough questions to answer. But fear not, because we have done the research for you! Here are our picks for the best hybrid SUVs you can buy in 2020.

The 2020 Rav4 Hybrid is offered in four trim levels, two of which check in at under $30,000. Regardless of whether you opt for the LE or XLE trim, you’ll get a five-seat SUV that’s big on value. It comes with a max of 69.8 cubic feet of storage space and averages an EPA-estimated 41/38/40 mpg (city, highway, combined). It also comes standard with all-wheel drive.

The all-new Rav4 also looks pretty tough for a hybrid, with its bold headlight design and angular sheetmetal. The hybrid version is the most powerful Rav4 available too. It offers 219 horsepower, which tops the 203 hp offered by the four-cylinder engine found across the rest of the range.

If you have a family of eight and want a hybrid SUV, your only option is the Toyota Highlander Hybrid. That’s not necessarily a bad thing, though. The Highlander Hybrid starts at $38,200 and comes standard with Android Auto and Apple CarPlay, a power liftgate that is height-adjustable, and blind-spot monitoring with rear cross-traffic alert. Despite its size, the Highlander still manages an impressive 36/35 mpg (city/highway) for front-wheel drive models and 35/34 mpg for those with AWD.

With the exception of the Chrysler Pacifica (which is a minivan) there aren’t any other hybrid SUVs out there with seats for eight. In fact, there aren’t many traditional eight-seat SUVs out there as competitive as the Highlander Hybrid, at least when it comes to fuel economy and pricing.

Say what you want about its massive spindle grille, but the Lexus RX450h is still the best luxury hybrid SUV on the market by a wide margin. The RX450h comes in two variants. There’s the five-seat, two-row model and a seven-seat, three-row dubbed the “RX450h L.” The former starts at $46,800 and the latter at $50,510. Those prices are relative bargains for a luxury SUV that comes standard with Android Auto and Apple CarPlay, a wealth of safety and driver’s assistance aids, and all-wheel drive.

It’s might not be the fastest or sexiest luxury hybrid SUV on the market. However, the RX450h does offer the most complete package. It won’t leave you lacking in luxury or feeling the pinch at the pump.

To some, the idea of a hybrid Jeep Wrangler is sacrilegious. Jeeps are supposed to be rough and tough off-roaders, after all. Hybrids are for dainty eco-warriors who live their life in the HOV lane. Right? Well, those two things can be true at the same time. Apparently there were enough eco-minded off-roaders out there to warrant the creation of the Wrangler 4xe, a plug-in hybrid Jeep that pairs a 2.0-liter four-cylinder engine with two electric motors.

Combined power output is estimated at 350 horsepower and 442 lb-ft of torque. The 17 kwH-battery pack has enough juice to propel the Wrangler for up to 25 miles on electric power only. Technically the Wrangler 4xe doesn’t go on sale until 2021, but it could very well help usher in a new era of electrified off-road SUVs.

It’s hard to find a better small crossover than the Kia Niro. Despite its smaller size, the Niro is spacious. It has comfortable seating for five and the ability to hold 54.5 cubic feet of cargo. It also comes pretty loaded, with standard Apple CarPlay and Android Auto, an eight-inch infotainment touchscreen, and dual-zone climate control. Most impressive of all, Kia’s compact hybrid crossover averages an EPA estimated 52/49/50 mpg (city, highway, combined). The Niro is also priced right, with an MSRP of just $23,490.

All of the above combines to make the Niro one of the best hybrids on the market. It’s certainly our pick for the best small hybrid SUV on sale today.

With the exception of the Acura NSX, hybrids are not about low 0-to-60 times and high top speeds. They’re about gas mileage and practicality. That’s especially true of hybrid SUVs, which are designed to make folks feel better about owning vehicles that have traditionally been described as “gas guzzlers.” That’s what makes the Porsche Cayenne E-Hybrid such an anomaly. It’s designed more for speed and performance than fuel economy. In fact, it boasts a top speed of 157 mph and the ability to sprint from 0-to-60 mph in just 4.4 seconds. All that power comes at a price, one that is both literal and figurative. The Cayenne E-Hybrid gets just 21 mpg combined. Oh, and it has a starting price of $81,100.

That being said, if you have a green streak, the means to afford it, and want to have fun getting the family from A to B, there’s no better choice than the Cayenne E-Hybrid.

The Subaru Crosstrek Hybrid can only travel for 17 miles on electric power. It’s also not even close to being the most-powerful plug-in hybrid SUV on the market, with its measly 148 horsepower. That said, it’s still a Subaru. That means it’s ridiculously capable off-road, attractively priced, and available with a wealth of standard features.

Very few plug-in hybrids have an MSRP of $36,155 and come standard with all-wheel drive, a terrain management system, heated front seats, and a leather interior. The Crosstrek is the best plug-in hybrid on the market precisely because it makes the smallest compromise. 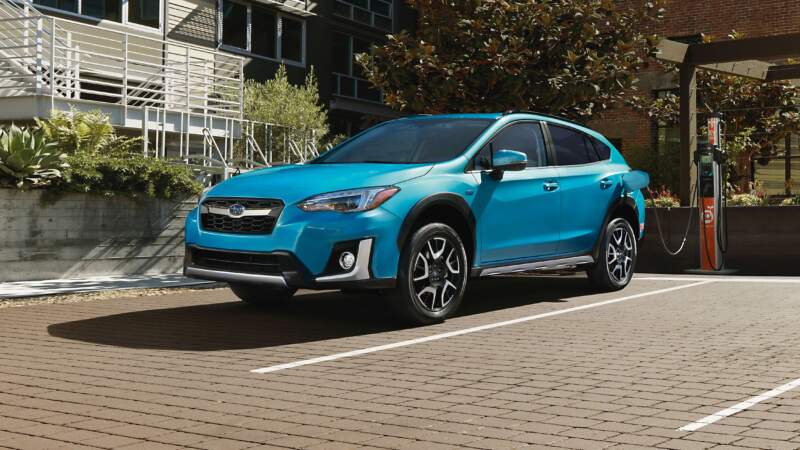