The Best Cars To Buy Second-Hand

Car brands and models have reputations among motorists and the general public. Some makes and models of cars are known as “lemons,” while others have reputations for being sturdy and reliable. And it is the trustworthy vehicles that are the best ones for people to buy second-hand. After all, there is nothing wrong with buying a used car.

Most financial planners recommend buying second-hand vehicles as a way to save money and avoid depreciation. People just have to choose the right make and model of car to buy when shopping for a used vehicle. Selecting the correct make and model of car can be the difference between breakdowns and expensive repairs and years of worry-free driving. Here’s a list of the ten best cars to buy second-hand.

As compact cars go, the Ford Focus is a great choice. And the Ford Focus can usually be found second-hand for less than $10,000 with plenty of features and upgrades included. The Focus is also one of the most popular vehicles around, having replaced the Toyota Corolla as the world’s bestselling automobile. That means means finding one second-hand should not be that difficult. Look for one that has less than 80,000 miles on it and, preferably, is still covered by a warranty.

For people who like a peppier ride, there is a sport version of Focus available. The Focus is also distinguished by great fuel economy, fun handling and a standard a voice-activated infotainment system. The biggest knock on the car is that the backseat is not roomy enough. Still, for affordability and fun driving, it is hard to beat.

If an SUV is more your speed, than the Honda CR-V is a great choice as a used vehicle. A leader in the “compact SUV” category of vehicles, the CR-V is reliable, durable, and retains its value better than many other comparable vehicles. It is also known for having a large interior and excellent safety rating.

Many CR-Vs also come tricked out with a power sunroof, an upgraded stereo, USB port, satellite radio, leather seats with front heating, computer navigation, backup camera, and dual-zone climate control. The CR-V is also known for requiring relatively few repairs. The main complaint with this SUV is that the four cylinder engine is sluggish and a V6 engine option is not available. Also, there is only seating for five people in the CR-V. Second-hand, you should be able to get into a Honda CR-V for around $12,000 or less.

The Kia Soul is best described as “boxy.” But don’t be put off by the exterior of this car. It’s a good option for anyone looking to buy used. It has top safety ratings across the board and is known for standing the test of time. Plus, the Soul’s unique design provides ample head and leg room, making it an excellent choice for the big and tall set.

The Kia Soul also scores well on fuel economy and has a lot of cargo space, making it ideal for families or people who travel a lot. You can find second-hand Kia Souls for around $8,000 or less, making them a great affordable option for folks on a budget. Just don’t expect a lot of power from the 1.6-liter engine. Still, hard to beat the price or benefits of this car.

If you’re in the market for a second-hand hybrid car that is good for the environment, then you should definitely consider the Toyota Prius. Used, these cars typically sell for between $10,000 and $12,000, which is quite a bit lower than the $25,000+ that they go for when brand new. Of course, the Prius has top fuel economy ratings among every major automotive reviewer.

However, the car also boasts other impressive standard features, such as push button ignition, a four-speaker stereo system, and three different driving modes that you can select depending on how much gas you want to save. The Prius is also known to be among the most dependable hybrid cars on the market today, which is good because repairing a gas/electric hybrid vehicle is much more expensive than a traditional car. As far as second-hand hybrid vehicles are concerned, the Toyota Prius is the gold standard.

When it comes to trucks, the Nissan Frontier is known to be a great option when purchasing second-hand. This is because the Frontier offers a powerful engine and great off-road ability for a competitive price. When bought used, the Frontier usually sells for less than $10,000. That’s a bargain for a truck that has a V6 engine, exceptional fuel economy, and the option of four-wheel drive that enables the vehicle to tow up to 6,500 pounds.

You can also find many Frontiers in a “King cab” model that seats as many as five people. Tough, sturdy, and strong, the Nissan Frontier is a workhorse of a truck. People who choose this vehicle are seldom disappointed. It also has great safety ratings and is known to be cost efficient when it comes to gas and repairs. Check it out.

If you were to buy one brand new, the Toyota Sienna would be among the most expensive minivans you could purchase. It will run you more than $30,000 for a pretty basic model. But second-hand, the Sienna can be bought for around $15,000, making them an exceptional value. With a fantastic interior, powerful engine, and the reliability that comes with a Toyota, the Sienna is a great minivan that will provide families with years of use and enjoyment.

In fact, the Toyota Sienna has been named “Best Minivan for the Money” on numerous occasions. Highlights include standard features like dual sliding rear doors with power-down windows, a six-speaker stereo system, and a telescopic steering wheel. The Sienna is also the only minivan to offer all-wheel drive. The Sienna is notoriously tough and able to take whatever a family throws at it. You certainly won’t have the breakdowns and repair bills you get with other, cheaper minivans. This is a vehicle for people who are in it for the long haul.

If you’re looking for a little muscle and like a sportier car, then a used Ford Mustang is the way to go. Not only do Mustangs retain their value better than most vehicles, they are also known for their power, large trunk, and style. Depending on the model year and mileage, a used Mustang made after 2011 can usually be bought second-hand for between $12,000 and $18,000. That’s a lot cheaper than the more than $35,000 that Mustangs sell for when brand new.

The biggest knock on the Mustang is that there isn’t a lot of leg room in the back seat. But who ever bought a Mustang for the leg room? This is a car you buy because you love the thrill of driving, not to shuttle little Sally and Jimmy to dance and soccer practices. The Ford Mustang is a top safety pick in its class, and wins hands down when it comes to handling and performance. This is a classic car that gets better with age. Just don’t feel the need to buy a brand new one.

A critical darling, the E-class has the luxury interior that people expect from a Mercedes-Benz. However, it also is known for being super strong and dependable, has top safety ratings, and impressive power with a standard V6 engine. Other standard features include a sunroof, power front seats, dual-zone climate control, and a Harmon/Kardon stereo system. It also has superior trunk space and cargo capacity. Used E-class Mercedes typically cost between $15,000 and $20,000. You might think that’s a lot for a used car, but it’s still a lot cheaper than the $50,000+ you would pay to buy this car new.

People who are in the market for an affordable second-hand car that costs between $5,000 and $7,000 need look no further than the Honda Fit. This innovative hatchback car is rugged and tougher than it looks. Buying this car means you won’t have to worry about spending hours at the repair garage. The Honda Fit is known for being exceptionally durable and able to pile on the miles without incurring huge repair costs.

U.S. News has named the Honda Fit the “Best Subcompact Car for the Money” for being spacious, comfortable, and dependable. Standard features include air conditioning, power windows and door locks, and a stereo with an auxiliary input jack. The vehicle also comes with anti-lock brakes and electronic brake-force distribution. For people in the market for a small car — or a first car — the Honda Fit is a great second-hand option.

Automotive experts claim that there are more second-hand Toyota Corollas on North American roads today than any other vehicle. And for good reason. The Corolla has proven itself to be the king of used cars. Known as an “everyman car,” the Corolla is a popular choice for people who value affordability and dependability. It’s also a decent size and has ample room for a mid-sized car.

This car regularly appears on lists of the best cars to own (new or used) and has won numerous awards for its functionality and affordability. While some Toyota models have been the subject of vehicle recalls in recent years, the Corolla has weathered the storm and remains one of the automaker’s signature models wordwide. New, a Toyota Corolla can cost as much as $25,000. However, they often sell for $10,000 or less when used, depending on the year and mileage. Even a barely used Corolla might sell for under $12,000. 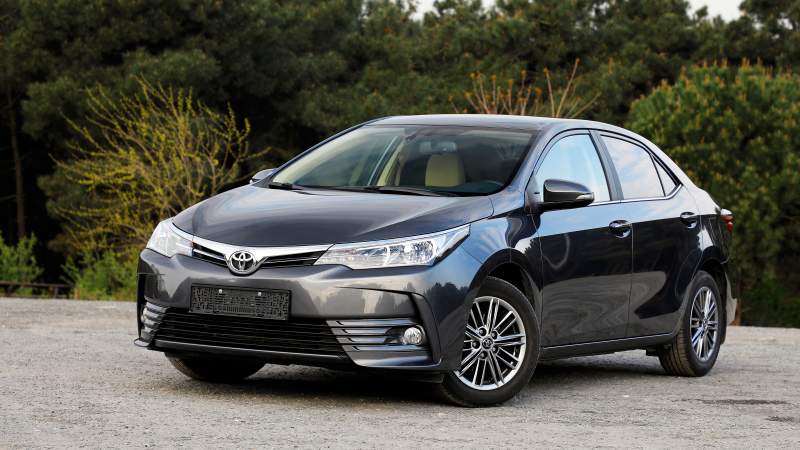