The 9 Most Fuel-Efficient Vehicles Of 2019

Gasoline prices fluctuate, but generally tend to go in only one direction consistently – and that’s up. And during the peak summer driving season, it is not uncommon for prices at the pump to spike and for drivers to be gouged. Sure, there are gas/electric hybrids or fully electric vehicles that people can buy to lessen (or eliminate) their reliance on traditional gasoline to power their car. But those electric and hybrid options have pros and cons of their own. Here is a list of nine traditional gas vehicles that will give you the best of both worlds — easy on fuel and also won’t leave searching for a charging station.

Not only has the Kia Forte FE model been completely redesigned for 2019, but it has the added bonus of being one of the most fuel-efficient sedans on the road today. The Kia Forte FE’s 2.0-liter inline-four engine produces 147 horsepower, while, at the same time, achieves 31 miles per gallon (MPG) when driving in the city, 41 MPG on highways, and 35 MPG combined. According to the Environmental Protection Agency (EPA), the annual fuel costs for people who own the Kia Forte FE are $1,050. Now that’s efficient!

As one might expect, the Jaguar XF is a large and luxury sedan, with all the nifty features that come with the Jag branding. It also happens to have great fuel economy, partly due to its diesel engine. This car has a turbocharged 2.0-liter engine that cranks out 180 horsepower and gets 31 miles per gallon in the city and 42 mpg when driving on a highway. Annual fuel costs are about $1,300, according to the EPA. The non-diesel models have considerably less fuel economy, with the smallest engine topping out at 28 mpg combined. So the diesel version is a solid step up, if you’re concerned about efficiency.

The Hyundai Elantra is relatively affordable at $21,000 and ranks pretty high in terms of fuel efficiency. The Eco has a modest 1.4-liter engine, but it still manages to return 32 miles per gallon in the city, 40 mpg when cruising on highways, and 35 mpg combined. Owners will have a smile on their faces when they realize they’ve only spent a little more than $1,000 in fuel costs for the year.

The Elantra Eco might not be a particularly flashy or powerful car, but it’s a perfect modern commuter vehicle — reliable, stylish enough, and easy on gas.

For about five grand less than the Hyundai Elantra Eco, consumers can get themselves into the Toyota Yaris, one of the Japanese automakers most popular sedans. Although compact, the Yaris remains a leading model when it comes to fuel efficiency. Its 1.5-liter four-cylinder engine produces only 106 horsepower but that helps to return 32 miles per gallon when driving within a city, 40 mpg highway, and 35 mpg combined. The EPA says annual gas costs should not exceed $1,100, unless you do some really heavy driving.

The Honda Fit remains the little car that could. This is especially true when it comes to fuel economy. Although the Fit is one of Honda’s oldest models, it’s still one of the most efficient vehicles you can buy today. The Fit’s 1.5-liter four-cylinder engine achieves an impressive 33 miles per gallon in the city, 40 mpg on the highway, and 36 mpg combined. That should entice people to consider this subcompact car that will only cost them $1,050 a year at the gas pumps, according to the EPA.

Another popular Honda makes the list, this time the Civic sedan. But not just any Civic sedan, the turbocharged model. It may have a 1.5-liter engine and continuously variable transmission, but this Honda Civic gets 32 miles per gallon in the city, 42 mpg on the highway, and 36 mgg combined. Owners can expect to pay an annual fuel cost of just $1,050.

The Civic is one of the best selling cars year over year, due to it’s remarkable reliability, durability, and the fact that it doesn’t cost owners an arm and a leg when the gas tank runs empty.

The Toyota Corolla hatchback model has a lot to recommend about it, notably fantastic fuel economy that comes from a more powerful engine. The 2.0-liter four-cylinder engine with continuously variable transmission produces a more robust 168 horsepower, yet still achieves 32 miles per gallon when cruising around city streets, 42 mpg when on the highway, and 36 mpg combined.

Owners will love spending less than $1,000 a year on gas at just $950 (on average). This Hatchback model still has a ton of available features to make it a modern masterpiece, including a vibrant infotainment system on an 8-inch touchscreen, tons of comfort and convenience features like heated seats and dual zone climate control, and a wide variety of smart safety features.

Yes, it’s powered by diesel fuel. But diesel fuel is widely available in North America and it helps to ensure that the Chevy Cruze is one of the most fuel-efficient vehicles available today. And while Chevrolet has said that it is reconsidering its diesel vehicle fleet, the sedan and hatchback versions of the Cruze continue to be produced for the U.S. market.

That’s good news, as the Cruze remains the second most fuel-efficient non-hybrid vehicle for sale in the U.S. today, with 31 miles per gallon in the city, an awesome 48 mpg when on the highway, and an impressive 37 mpg combined. The 1.6-liter four-cylinder diesel engine doesn’t produce a ton of horsepower, but it manages to achieve great fuel economy with satisfactory performance. While the Cruze Diesel does have great fuel economy, the annual estimated fuel costs are a little higher (around $1,250), due to the higher cost of diesel.

The winner for best fuel economy in 2019 is the Mitsubishi Mirage. And not only is the Mirage the most fuel-efficient vehicle on this list, it is also the cheapest at an entry price of $14,000 for the well-equipped base model. The Mitsubishi Mirage boasts a super impressive 36 miles per gallon when winding through city streets, 43 mpg when driving on a highway, and an exceptional 39 mpg combined.

That puts the Mirage ahead of the second place Chevy Cruze by two mpg overall. With its tiny 1.3-liter engine, the Mirage produces only 78 horsepower with a continuously variable transmission. Yet what it lacks in power, the Mirage makes up for in fuel savings. Owners of this car spend an average of $950 per year at the gas pumps. Can’t argue with that fact. 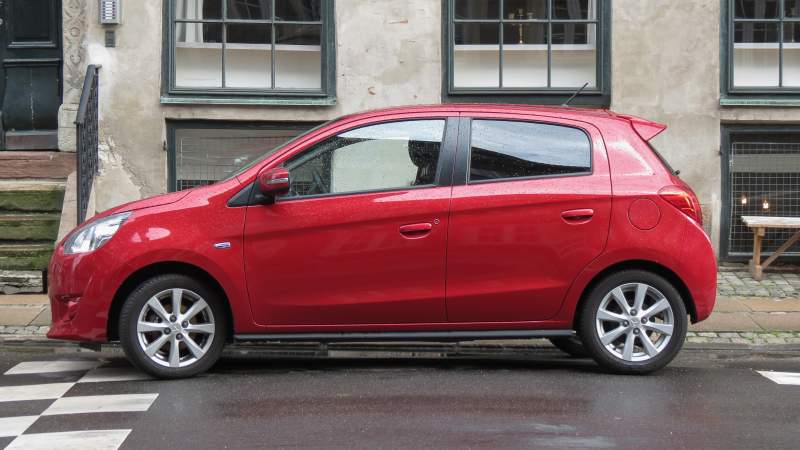