The 2019 Subaru Impreza Offers More Than Its Compact Size Implies

Since it first went into production in 1992 the Subaru Impreza has changed a lot. It’s been offered as a sedan, a hatchback and even as a coupe over the years, and today it can be had in sedan and five-door hatch body styles.

The Impreza gained worldwide acclaim in its early days for a period of unrivaled domination in the World Rally Championship, but today’s Impreza is quite different. There’s still plenty to like about the 2019 Subaru Impreza – it does offer something different in the compact car segment. If you haven’t considered the Impreza yet, here’s what this unique little car offers.

The Impreza gained almost cult status in Europe on the back of its motorsport successes in the 1990s, but the performance models have since been hived-off from the regular Impreza in a similar way to how Mitsubishi separated the Lancer from the Evolution variants.

If you approach the Impreza as a smart, capable compact car for families and commuters, the exterior styling makes perfect sense. And here in America we’re lucky enough to be offered the Impreza in two body styles. It’s not difficult to believe when you look at the clean and conservative styling that it’s a car designed with the hatchback format very much at the front of the designers’ thinking, and that’s because it’s a better-looking car in that form.

Under the hood of the 2019 Subaru Impreza is a 2.0-liter flat-four, and it certainly sounds like it might be a lot of fun when you hear the exhaust note. The output of the flat-four might not sound quite as impressive at 152 horsepower and 145 lb.-ft. of torque though. However, it’s going to be more fun than some might imagine as this is also one of the lightest models in its class with a curb weight of less than 3,000 pounds.

What really sets the Subaru Impreza apart from the competition is its standard all-wheel-drive system. Most models in this segment are front-drive, and few even offer all-wheel-drive as an option. In this case, though, there’s no such thing as an Impreza without AWD. It’s not a system that’s going to allow you to power through snowdrifts and navigate the roughest wild wilderness trails, but it does bring a degree of capability that’s rare in this section of the market.

If you like the driver-engagement of a manual transmission you’ll be pleased to know it’s standard with base and Sport trim level. But, as a five-speed, you might want to pass it up in favor of the alternative. The alternative is a CVT, but it’s a very good one that even does a more than passable impression of a regular automatic with a “stepped” mode that is designed to simulate proper gear changes.

There’s a slightly utilitarian feel to the interior materials, but that suits the Subaru image and the AWD ability of the Impreza perfectly. The standard cloth is tough and durable, and even the leather in higher trim levels looks and feels like it will cope well with the rigors of family life.

If you want safe you’ve certainly got in with the 2019 Subaru Impreza. Every model comes with at least seven airbags, a rearview camera, and stability control, and optional with CVT models but standard with the Impreza Limited trim is an extensive suite of crash-avoidance technology. It includes automatic emergency braking, adaptive cruise control, and active lane control, and every model other than the entry model can be upgraded further with blind-spot monitors and rear cross-traffic alerts.

For those who are not completely familiar with the latest safety technology features, the ratings from the IIHS and NHTSA tell the real story. The NHTSA gives the Impreza a full five-star rating for overall safety, and the IIHS gives the Subaru its ultimate Top Safety Pick+ rating.

It wouldn’t be unreasonable to assume the standard AWD system would have a detrimental effect on the Impreza’s fuel economy, but you’d be wrong. Hatchbacks with the CVT are rated at 28 mpg in the city, 26 mpg on the highway and 31 mpg combined. That’s not bad at all, but the Impreza sedan with the CVT can deliver even better ratings of 28/38/32 mpg.

A 2019 Subaru Impreza won’t turn the heads of too many onlookers as you drive past, and it probably won’t change your kids’ impression of how cool you are. But if you want a really good, very capable, very flexible and surprisingly economical compact car with standard all-wheel drive, it really is in a class of its own and well worth giving a try. And unlike some of the usual suspects in the segment, you won’t have much trouble identifying it in a crowded parking lot. 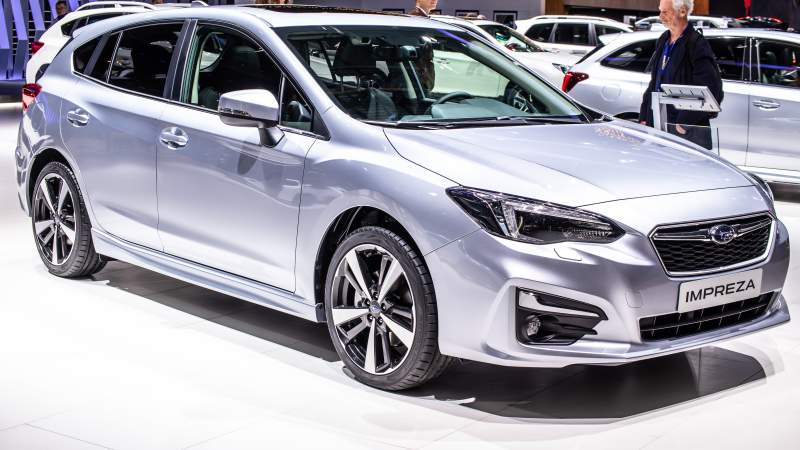