The 2018 Toyota Yaris: A Fit Rival for Honda

Toyota and Honda are both known for producing reliable, affordable, and safety-conscious vehicles. Much like Ford and Dodge, they are long-standing rivals that continue to push each other to produce popular models the public will enjoy. Both car-manufacturing giants each offer their own set of unique characteristics, but Toyota sets itself apart in fuel efficiency and safety, and the 2018 Yaris is no exception.

The 2018 Toyota Yaris is a great buy if you’ve got an eye on your budget, safety, and carbon footprint. Let’s take a closer look at what the 2018 version of the Yaris has to offer.

The 2018 Toyota Yaris is powered by a single 1.5-liter four-cylinder engine, capable of 106 horsepower and 103 ft-lb of torque. The engine can be mated to either a four-speed automatic or a five-speed manual transmission, depending on the trim and model chosen.

The Toyota Yaris is available as either a two-door or four-door hatchback, and only comes in front-wheel drive.

The 2018 Toyota Yaris can be purchased in the following colors:

All 2018 models equipped with the five-speed transmission post 30 city and 36 highway EPA-estimated mpg numbers. The two-door and four-door models with the four-speed automatic transmission come in just under that with 30 city and 35 highway mpg ratings respectively. Both transmissions post the same combined mpg, of 32. 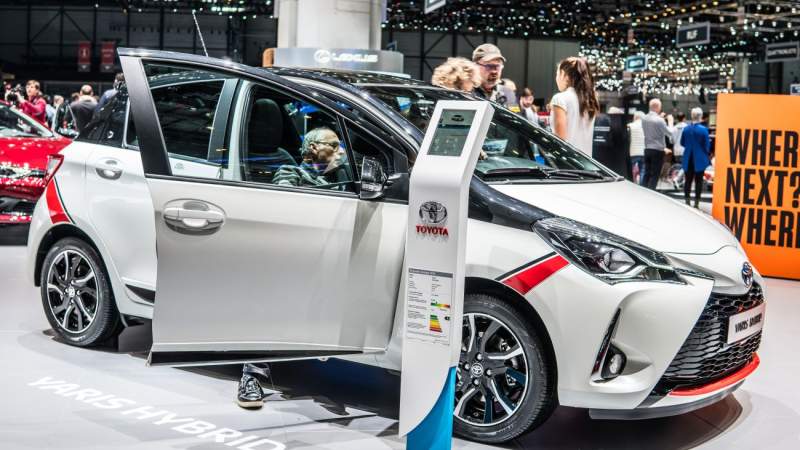 Models equipped with the L trim can choose from either a five-speed manual or a four-speed automatic transmission. Exterior features include halogen headlights with chrome accents, daytime running lights, and 15-inch wheels. Inside L trim models, customers will receive a 6.1-inch touchscreen with the Entune Audio package, which includes Bluetooth. The touchscreen also has an integrated backup camera with guidelines for the vehicle’s projected path. Cloth seats and a cargo cover top off this trim level.

If you go for the LE trim, you’ll enjoy everything the L trim features and a few more upgrades. In this trim level, you’ll get cruise control, an engine immobilizer in case of break-in, and remote keyless entry. These models are only available with the four-speed automatic transmission.

Finally, two-door 2018 Toyota Yaris models at the SE trim level ride on 16-inch wheels and are fitted with either the four-speed automatic or the five-speed manual transmission. Some exterior features to highlight include LED daytime running lights, projector-beam headlights with LED light bar accents and black sport trim, fog lights, and sporty front fascia. A rear spoiler adds some flair. Interior accessories include a leather steering wheel and shifter, sporty front seats, and best of all, a seven-inch touchscreen from Entune Audio. Drivers will enjoy the SiriusXM capabilities, as well as the available navigation and advanced voice recognition.

According to U.S. News, the IIHS gave the 2018 Toyota Yaris a “Good” rating for all tests except for the “Small Overlap Front Test,” in which the Yaris received a moderate rating. The National Highway Traffic Safety Administration gave the 2018 Yaris a five-star overall rating, awarding it four stars out of five in only the “Rollover Rating” and “Front Passenger Side” ratings for Frontal Crash.

The 2018 Toyota Yaris is categorized as a subcompact hatchback, and competes fiercely with the Honda Fit, Kia Rio, Ford Fiesta, Nissan Versa, Chevrolet Sonic, as well as Toyota’s own Prius. The Yaris last had a facelift in 2015, and Kelley Blue Book admires the better styling of this year’s model. The 2018 Yaris two-door and four-door models mirror one another in exterior dimensions. While that’s good news for two-door owners, four-door models suffer a bit in terms of backseat space.

Edmunds lauds the benefits to owning a 2018 Yaris, while lamenting that they come with some sacrifices. A lot of technological features that are standard on other marques’ base models are absent in the 2018 Toyota Yaris, such as cruise control and the Android Auto/Apple CarPlay support. Kelley Blue Book notes there’s no telescoping steering wheel, so if you’re not of standard driver size and height, be aware.

Prospective owners should also be aware that there are no substantial changes to this year’s model from the last few years, so you could potentially invest in a later model, at least according to U.S. News. Experts there noted the lack of stellar performance by the small four-cylinder Toyota engine. Kelley Blue Book recommends the Ford Fiesta or Chevy Sonic if you’re wanting some FIAT-like peppiness, but KBB experts also were impressed by the two-year complimentary maintenance offered on the 2018 Yaris.

The Honda Fit is Toyota’s biggest rival in this segment. Some buyers might prefer the styling and interior quality of one over the other, but both vehicles offer similar features at relatively the same price point. Other manufacturers have begun to focus on the compact and subcompact segments, but none seem to be able to quite match the Yaris package Toyota offers. If you’re in the market for a small, reliable, durable, and fuel-efficient vehicle, it’s hard to go wrong with the 2018 Toyota Yaris.

While the 2018 Toyota Yaris isn’t the fastest hatch on the road, it sure makes up for its lack of peppiness with lots of other key features. A reliability and high resale value make it the perfect first car for any teenager, and the fuel efficiency numbers will have any parent handing over the keys without a wince. Test drive the 2018 Toyota Yaris today to check out its features and decide for yourself. 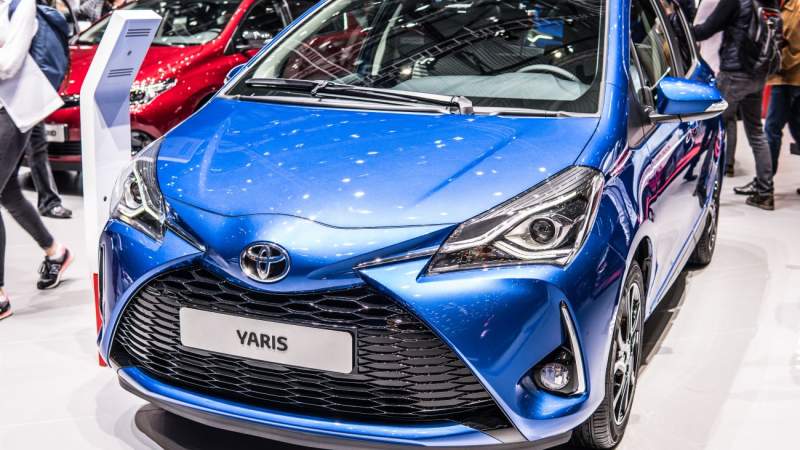