If you’re in the market for a luxury SUV, the Acura MDX is a hit among consumers and reviewers. If you’re interested, here’s everything you need to know about the 2018 Acura MDX.

The 2018 Acura MDX offers two powertrains. The first is a 3.5-liter V6 good for 290 horsepower and 267 lb-ft of torque. The engine is mated to a nine-speed automatic transmission and sends power to the two front wheels. All-wheel drive, or as Acura calls it Super Handling All-Wheel Drive (SH-AWD), is available for $2,000 more. Aside from the V6, the only other engine option is a hybrid.

The 2018 MDX Sport Hybrid has a 3.0-liter V6 engine producing 257 horsepower. Supplemental power is provided by three electric motors. The first sits in the transmission housing and sends 47 extra horsepower to the two front wheels. The other two motors power each rear wheel and produce 36 horsepower apiece. Combined, the MDX Sport Hybrid has a total power output of 321 horsepower and 289 lb-ft of torque. The hybrid’s only transmission option is a seven-speed dual-clutch.

Reviewers have knocked the MDX’s nine-speed auto but found that the SUV handled better than expected. Car and Driver clocked the AWD MDX at 6.0 seconds in a 0-60 mph sprint. The MDX Sport Hybrid covered the same ground in 5.7 seconds. These figures match up well with other more powerful luxury SUVs like the Volvo XC90 and Audi Q7. In addition to being surprisingly quick, reviewers have also praised the MDX for its nimbleness. The SH-AWD system, complete with a torque-vectoring rear differential, helps keep the SUV confident through corners. Motor Trend said the all-wheel-drive system helps the MDX “drive smaller than it is.”

The 2018 Acura MDX comes standard with three rows of seating. The base configuration has seating for seven, with three seats in the middle and two in the back. However, the MDX can be optioned with two second row captain’s chairs. This interior configuration is costly as it requires optioning both the Technology ($4,400) and Advance ($6,050) packages.

Notable standard features include leather seats, a power moonroof, and tri-zone climate control. All MDXs feature a dual-screen infotainment system. The top screen –– which does not feature touch controls –– measures eight inches. The screen below is touch-sensitive and measures seven inches. Apple CarPlay and Android Auto are standard on the 2018 MDX.

The MDX offers many optional features. These include a fold-down screen that allows passengers in the second row to watch movies, GPS-linked climate control, heated and ventilated front seats and heated second row seats, and a 12-speaker surround sound system.

A suite of safety tech known as AcuraWatch comes standard on all MDX models. AcuraWatch includes collision mitigation braking, adaptive cruise control, lane-keep assist, and road departure mitigation. Optional safety features include blind spot monitoring, a 360-degree surround view camera, front and rear parking sensors, and rear cross traffic monitoring. The 2017 MDX was an IIHS Top Safety Pick+ and the NHTSA gave it a five-star overall safety rating, so we can assume that they maintained those safety measures for the 2018 models. 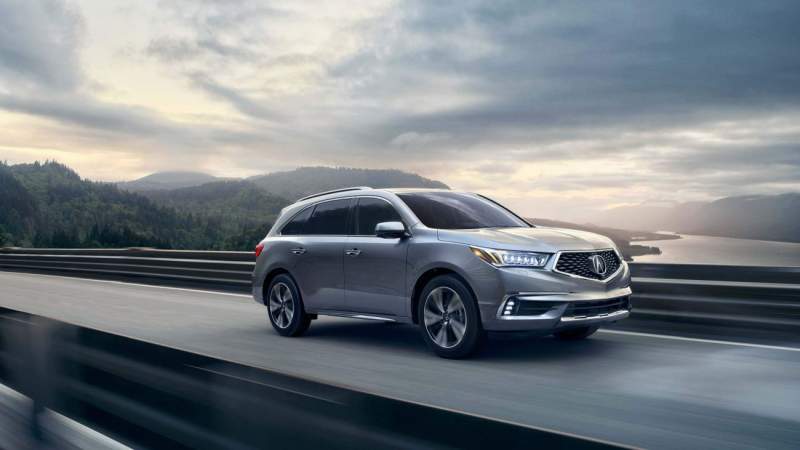 The Technology Package costs $4,400 and adds tech and luxury features like perforated leather seats, a GPS-linked climate control system, 20-inch aluminum alloy wheels, rain-sensing windshield wipers, a premium 10-speaker sound system, and a navigation system complete with voice recognition. Blind spot monitoring and a rear cross traffic monitoring are also included. The Technology Package is the only one of the three packages that can be optioned independently.

At $6,050, plus the cost of the Technology Package, the Advance Package isn’t cheap. It does greatly up the luxury of the MDX’s interior, though. With the package, the second-row bench seats are swapped out for two captain’s chairs. A center console is fitted between the chairs and natural wood accents are added throughout the cabin. All chairs are made from perforated leather and the front two rows of seats have heating, with the driver and passenger’s seats also offering ventilation. The Advance Package also adds a heated steering wheel, idle stop/start, front and rear parking sensors, and a surround view camera.

While the MDX has an affordable base price, the SUV can quickly get expensive once you start adding on options. If you’re budget-conscious, SH-AWD and the Technology Package are the way to go. Those two options ring in at $7,000 and greatly up the capabilities, luxury, and tech of the MDX.

The Acura MDX is in a crowded segment that includes the BMW X5, Audi Q7, Cadillac Escalade, Tesla Model X, Volvo XC90, and Mercedes-Benz GLS-Class. When compared to each of those SUVs individually, it’s easy to find faults with the MDX. Its tech is outclassed by the XC90. The Escalade offers much more room and comes with built-in swagger. The German SUVs easily out-luxe the Acura. While it handles surprisingly well, the MDX is outperformed by the many of its competitors.

While the MDX can look lacking when compared with its rivals head-to-head, on the whole the SUV is a step ahead in its segment. Remember, it is the all-time best-selling luxury three-row SUV in America and was the second-best selling luxury SUV of 2016. A big part of the MDX’s popularity has to do with its pricing. At a hair under $45,000, the MDX is incredibly affordable. What’s more is that the base model comes well-equipped. Even when you start adding on the options, the MDX is still cheaper than many of its competitors.

If you’re looking for a luxury SUV that has good value, is surprisingly fun to drive, and is well-equipped then check out the 2018 Acura MDX. 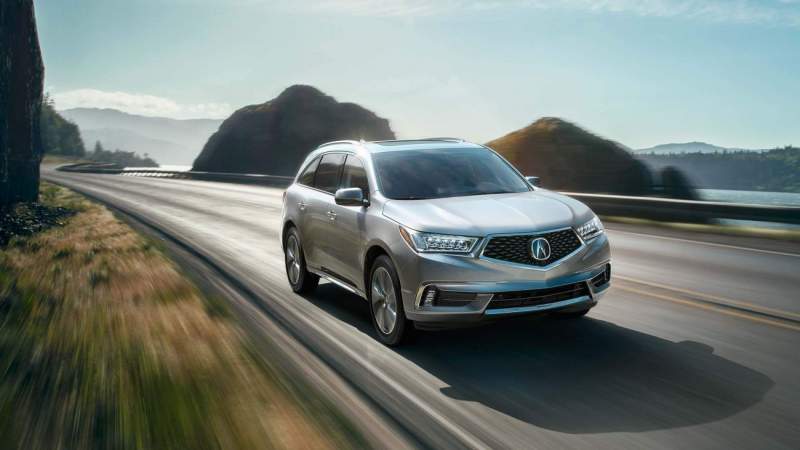